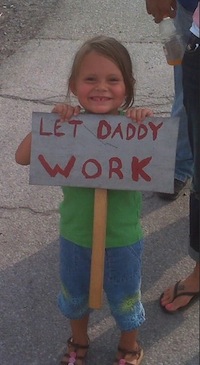 Honeywell workers have had little to celebrate at recent Christmases. Here, families hold protest signs during the 2010-2011 lockout. (Local 7-699)

For the past several Christmases, workers at Honeywell’s uranium plant in Metropolis, Ill., have had little to celebrate. Most of the workers at the plant have spent the best part of four years in a series of labor struggles with the company: first a tense 13-month lockout ending in 2011, then post-lockout disputes in which the union alleged that the company failed to abide by the new contract, and then, in July of 2012, a yearlong shuttering of the plant that led to temporary layoffs of almost the entire union workforce.

This holiday season, however, the workers are finally getting something to cheer about—all of their jobs back, two days before Christmas.

Earlier this month, Honeywell’s new plant manager Jim Pritchett recalled the final 11 of the nearly 200 laid-off union workers—including the union local president, Stephen Lech. The last of the workers restarted their jobs on Monday, December 23. The union, United Steelworkers (USW) Local 7-699, is hoping that the recalls may be a sign of improved relations with Honeywell.

That relationship grew even more strained this summer, after Honeywell reopened the renovated plant in May. While the company began bringing back laid-off union workers in an order determined by lists negotiated with the union, it stopped with 21 workers still left on the list. Local 7-699 alleges that this was an attempt to avoid rehiring Lech, who was next in line.

Out of solidarity with the laid-off workers, some union workers refused to work overtime, saying the plant was understaffed and that Honeywell was using overtime to avoid filling the needed positions. In turn, Pritchett (then the plant's operating manager), sent a memo in July canceling summer vacations for all workers because not enough overtime shifts were being filled.

On October 25, Local 7-699 filed an unfair labor practice charge with the National Labor Relations Board, saying that Honeywell had “unlawfully, disparately, and discriminatorily failed and refused to reinstate from layoff, union president, Stephen Lech, because he engaged in protected, and concerted, and union activities.”

The NLRB was getting ready to hear the case when Honeywell settled. If the board had ruled in favor of the local and found that the refusal to reinstate was in retaliation for union action, Honeywell would have been legally liable for the back pay for the 21 workers who were not recalled during that six-month period. Lech estimates that the payment could have totaled more than a half a million dollars.

Some union activists say that the threat of legal action over the layoffs propelled Honeywell to finally readmit the last 21 workers to the plant. Honeywell did not return Working In These Times’ request for comment.

While Honeywell’s motives are unclear, what is clear is that this Christmas Eve, a lot of Honeywell workers in Metropolis, Ill., have reason to smile. The news of a victory gives union workers a much-needed morale boost as they head into what are expected to be contentious negotiations over their contract, which is set to expire this June.

“I¹m excited about it,” says Lech of the rehirings. “We’ve fought hard against Honeywell for the last four years, and this is a huge victory for us.”