The U.S. Government Uses Sweatshops, Too 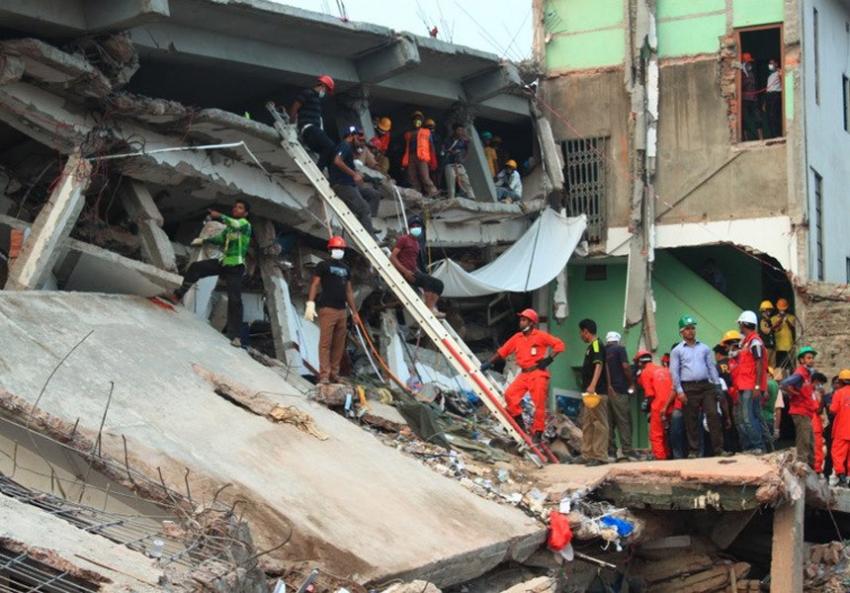 Though the Rana Plaza collapse prompted some private companies to reform their supply chains, the U.S. government has not done the same. (Sharat Chowdhury / Wikimedia Commons)

The collapse of the Rana Plaza factory complex in Bangladesh last April exposed the cruel link between abusive Global South factories and the Western brands they supply. But while consumers may have been shocked to learn of the Gap or Benetton's latest designs strewn amid the wreckage of “death trap” factories, they might have missed another bit of debris: the label of the U.S. government. In fact, much of the clothing churned out by overseas sweatshops is custom-made for Uncle Sam.

In an extensive investigative report, New York Times details how the federal government's contracts with overseas factories to make uniforms and other apparel are connected to egregious human rights violations, including child labor and union suppression.

A recent audit by labor monitoring authorities found workers as young as 15 at a factory in Phnom Penh, Cambodia that produces clothes to be sold by the Army and Air Force. Some workers spoke to the Times of having to work long shifts without breaks, forcing them to soil themselves while sewing.

The Times also reported evidence of child labor in another Bangladesh factory commissioned to produce Marine Corps-branded shirts. And at yet another facility, this one making clothes for the General Services Administration—which supplies uniforms for more than a dozen federal agencies—beatings of workers were reportedly frequent, as was the often brutal suppression of labor organization. Both facilities lacked proper fire protections.

And in Haiti, a country scarred by the legacy of U.S. military intervention and devastating trade policies, government-supported low-wage garment work underscores the U.S. military's continued influence over the impoverished island. A local clothing producer, BKI, told the Times it hopes to expand its production of camouflage wear this year thanks to a $30 million contract with a Missouri-based uniform company and the General Services Administration. Meanwhile, the workers inside earn 72 cents per hour on average, which is below Haiti's minimum wage and “barely covers food and rent.”

Such overseas deals are part of the government’s practice of "procurement," or contracting with private firms for goods or services. Ultimately, however, whether the buyer is a public agency or a high-fashion retail brand, any trade with the Global South garment industries runs the risk of worker abuses, corporate impunity and rampant exploitation.

Recently, PR-conscious private-sector clothing-makers have made some overtures toward improving labor practices along their supply chains. In Bangladesh, for example, the Rana Plaza collapse and other disasters have prompted about 120 multinational brands, including Adidas and H&M, to shown some willingness to reform their supply chains by signing onto the legally binding Bangladesh Accord on Fire and Building Safety. But thus far, few similar improvements have been enacted by the U.S. government.

Following the Rana Plaza disaster, the White House did make the largely symbolic move of temporarily suspending Bangladesh’s trade preferences on some goods. There’s been little action, however, on a more concrete proposal that would target improving military procurement in Bangladesh. According to a recent memo from the office of Rep. George Miller (D-Calif.), the military "provides little to no oversight of the labor and safety conditions" in its supply chain and has failed to address evidence of labor abuses. One exception is the Marine Corps Trademark and Licensing Office: After the agency's labels, displaying the slogan “The Few, the Proud,” turned up in the ruins of the deadly 2012 Tazreen factory fire in Bangladesh, the Office implemented stronger worker safety provisions for its suppliers that parallel the Bangladesh Accord, as well as child labor restrictions. For the most part, though, Miller's memo suggests the military contracting system has largely resisted meaningful labor reforms.

In June, Rep. Miller teamed up with Rep. Jan Schakowsky (D-Ill.) to propose legislation to compel military exchanges—special military-run sales outlets that share the consumer clothing market with private retailers—to adopt the Bangladesh Accord. Though the proposal was successfully incorporated into the House's version of the pending military spending bill, it was ultimately left out of the one in the Senate.

And supply-chain labor abuse isn’t limited to Bangladesh alone. In light of this, the advocacy group International Labor Rights Forum (ILRF) has urged the federal government to set strict labor standards for overseas procurement in general, with the option of sanctioning contractor firms “if the factories and other high-risk points in the supply chain do not comply with applicable laws and regulations and internationally accepted labor standards.” The ILRF also promotes a more comprehensive monitoring structure that would provide independent oversight that engages workers and unions.

“The government should expect to pay for products made in decent working conditions, in compliance with all applicable labor standards, by workers who earn a living wage—that is, a fair price,” Claeson says. “In the context of procurement, paying a fair price is the way the government 'invests' in compliance.”

Ideally, activists say, the government would retake control of its supply chain from private contractors and give more service jobs to federal employees—thus avoiding outsourcing, and the attendant costs and risks, altogether. This practice, known as “insourcing,” would reverse a longstanding trend toward privatization in the public sector and would likely take considerable political effort.

In the meantime, however, if private clothing companies can be pressured to change their shoddy labor practices, then surely government agencies can pursue a higher standard for factory workers whose everyday struggles make a shameful mockery of “The Few, the Proud.”