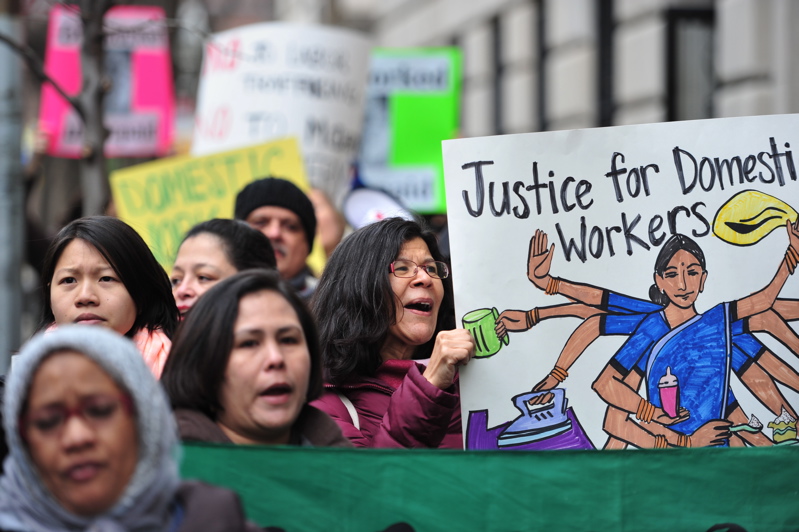 A group of protesters demonstrate in front of Indian Consulate General in New York on Dec. 20, 2013 in support of Sangeeta Richard and increased protections of domestic workers.   (Stan Honda/AFP/Getty Images)

A certain romance colors our image of the house servant of yore. In fare from Downton Abbey to Hollywood's The Butler, they're depicted as spectacles of starched traditionalism, deference and obsessive manners, even as they navigate unspoken class and racial faultlines. Though household labor has evolved from its rigid historical forms, a new chapter of the period drama for the era of globalization has emerged in New York's rarefied diplomatic scene, with curious case of Sangeeta Richard, the domestic worker of Indian diplomat Devyani Khobragade.

Richard unleashed a diplomatic firestorm last month with her accusations of labor abuse: She claims that when she entered the United States on a special A-3 visa for diplomatic personal employees, her contract stated she would earn $4,500 per month as a live-in domestic worker beginning in November 2012. She ended up with less than $600 monthly, just over $3 per hour, a fraction of the federal minimum wage. A petition circulated in support of Richard states that she was kept in “slave-like conditions.” Her husband reportedly filed a petition in a New Delhi court complaining that his wife was being forced to work each day from 6a.m. to 11p.m.

Her employer, Khobragade, was subsequently charged with labor violations and visa fraud, and suddenly became the center of the story. Indian officials and elites protested the arrest as a political affront as well as a cultural misunderstanding. In a country strafed by class divides, the nationalist logic goes, the tradition of keeping a maid is a sign of status and integral to a middle-class lifestyle.

But the Richard affair is not simply a diplomatic spat. Rather, it underscores deep issues of labor, gender and class that cut across hemispheres.

Domestic work is not a cultural peculiarity of India's, but an expanding globalized sector of more than 50 million people, flowing between regions and across borders, generally from poor to rich areas. Sometimes these people are placed in systems that meet the legal definition of indenture, enslavement or human trafficking. More typically, these workers, mostly women—and in urban areas like New York, overwhelmingly immigrants and women of color—are employed individually or through an agency, and work in a system with virtually no oversight that lacks even basic worker protections.

Many household servants are “imported” to accompany wealthy expatriate households. For specialized employees of diplomats, like Richard, their right to work is linked to their employer's sponsorship, which in turn opens the door for coercion. This may mean outright abuse or more insidious oppressions, such as holding workers hostage by confiscating their papers and confining them to the house.

Even when they don't depend on their employer for a visa, immigrant live-in domestic workers are still vulnerable, since they are excluded from basic legal protections, such as workplace safety and overtime provisions, guaranteed to other workers under federal law. Although activist groups like the National Domestic Workers Alliance have successfully championed domestic workers' "bills of rights” in New York, Hawaii and California, which provide benefits like overtime pay and regular rest breaks, nannies and housekeepers remain among the country’s poorest and least protected workers.

On top of everyday wage violations, isolated live-in housekeepers are especially vulnerable to violence and sexual assault. They face stiff deterrents to reporting abuse, such as language barriers, undocumented or precarious legal status, and fear of losing vital remittance earnings if they are deported. Bosses have been known to threaten workers’ families. (According to news reports, Richard’s family has claimed they were directly intimidated by Khobragade's family after they protested about her working conditions.) Sometimes workers have had their phone calls and letters restricted as well.

Though A-3-type visas are just a small portion of the total employment visas issued by the government ( 1,200 have been issued in recent years), Richard’s plight is hardly exceptional, except in the sense that it actually came to public light. “This case is certainly a microcosm of the larger environment that migrant domestic workers face,” says Tiffany Williams, advocacy director of the Institute for Policy Studies' Break the Chain campaign, a DC-based program focused on issues of exploited domestic migrant labor.

Paradoxically, in the aftermath of the Richard allegations, public attention fixed on the arrest of Khobragade, particularly when she complained of mistreatment at the hands of police—she says she was strip-searched and jailed along with “drug addicts” and sex workers. India’s foreign minister demanded that the charges be dropped. Protesters rallied in the street while security barriers were provocatively removed from the U.S. embassy in New Delhi.

Whether Khobragade was mistreated should be investigated. But labor activists are wondering why that complaint has taken center stage in this cross-class, cross-continent conflict, rather than the abuse allegations. Richard’s lawyer Dana Sussman, who works for the anti-violence advocacy group Safe Horizon, stated after the unrest broke out, ‘‘Mrs Richard is not on trial here."

In a Huffington Post commentary, Deepa Iyer of SAALT (South Asian Americans Leading Together), which advocates for South Asian communities in the U.S., highlights Richard’s case as representative of the corrosive inequality and class prejudice pervading much of the diaspora:

It's about the rights of Sangeeta Richard, about the experiences of many domestic workers in similar situations in the United States, about the need for stronger immigration and labor laws, and about the responsibility that we have in standing with those in our own community who face workplace exploitation.

Cases like Richards, where the elitism of India's domestic traditions clashes with the labor injustices facing immigrants in the U.S., reveal the need for a class-based as well as ethnically sensitive approach to immigrant labor issues.

On the elite level, the problem of diplomatic immunity and “cultural exceptionalism” for Khobragade further complicates the issue, but activists say the idea of immunity should not equal impunity when crime victims seek justice under U.S. laws. Williams warns that “the lack of meaningful consequences for diplomats means that they can continue to bring over more workers, and will not be deterred from such abuse again with the next worker. It also sends a message to workers that they shouldn't bother seeking justice.”

As for the cultural argument based on India’s strong tradition of domestic servitude, Williams counters that as an educated diplomat, Khobragade should have known she would be subject to U.S. labor regulations. Besides, the issue of cultural relativism invoked here is clearly aimed at masking the universal human and labor rights at stake in both countries.

"Yes, human rights advocates must absolutely be sensitive to culture," Williams says via email. "It provides context, and provides guidance on best practices in how to help victims. However culture cannot be the reason for condoning or allowing an entire class of people to be subjugated because 'that's how it's done there.'"

While it challenges the modern South Asian rendition of the upstairs-downstairs hierarchy, Richard’s path to justice is far from assured, as the U.S. legal system has never been kind to domestic workers or migrants. Nonetheless, the case has opened a much needed global conversation about the values that transcend borders, the barriers of diplomatic immunity, and divisions of class. And for once, the maid's voice is heard as loud and clear as that of the woman she serves.