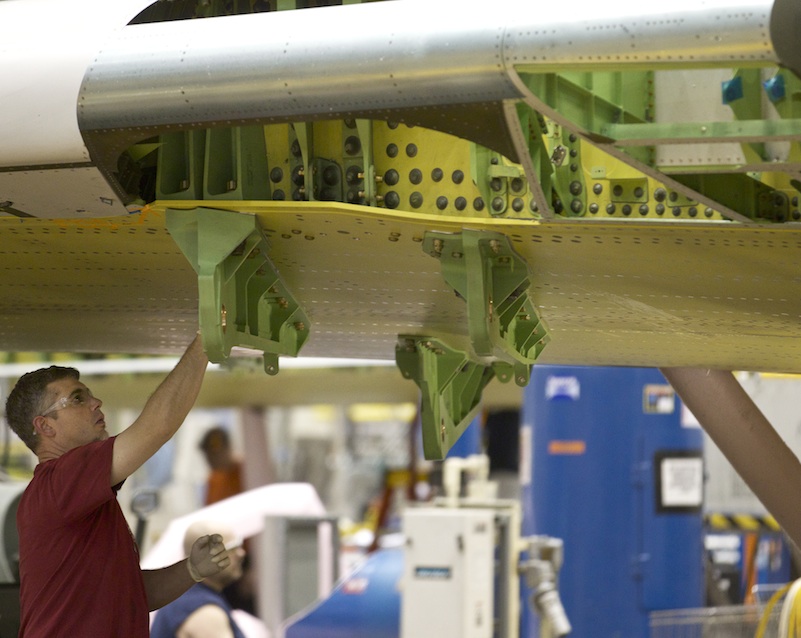 A Boeing employee works on the wing of a Boeing 777 jet in Everett, Wash. (Stephen Brashear/Getty Images)

On Friday, yet another nail was put in the coffin of the defined-benefit pension in America. According to the Economic Policy Institute (EPI), the percentage of U.S. private-sector retirement plans with defined benefits fell by half between 1989 and 2010, from 42 to only 22 percent. Yet this type of plan is much preferred by unions and worker advocates over defined-contribution plans such 401(k)s, because if a company makes bad investment decisions, workers’ retirement benefits don’t suffer.

Boeing is one of the few remaining major corporations in the United States that still offers defined-benefit pensions. But on Friday, 30,000 union Boeing workers in Washington state voted to give up the pensions for new hires and to let the company freeze the plans for all workers in 2016.

“I don’t see a way forward on pensions. I don't see what it is that we can do,” says Ross Eisenbrey, vice president of EPI, which advocates for low- and middle-income workers. “Retirement security right now is wishful thinking.”

The vote by members of the International Association of Machinists (IAM) Lodge 751 came after Boeing threatened to move production of the 777X jet line, along with potentially thousands of jobs, out of Washington state unless workers agreed to the contract. The workers voted down a similar contract in November, but Boeing refused to budge—even though the company is doing well, with over $400 billion dollars in back orders and a program to buy back more than $10 billion in its own stock.

In December, the international stepped in and forced the local, which opposed the deal, to hold another vote. In a bid to keep their jobs, the workers voted 51-to-49 percent on Friday to ratify the slightly revised contract, which ends defined-benefit pensions and bans workers from striking for eight years.

“Boeing is one more point in a long trend of employers shedding their pension liability,” says Eisenbrey. “Looking ahead, they don’t want to be in a situation where we go through another stock market plunge and they wind up having to put a lot of money in the pensions’ problem. From an employer's point of view, a defined-contribution plan is the easiest thing, you just put in 3 percent from an employee's paycheck and they invest. If the employee invests badly, then it’s their tough luck. Its just simpler.”

The loss of pensions at Boeing marks a major setback for unions, as employers typically follow the example of other employers at the bargaining table in terms of what constitutes a reasonable demand. Since the financial crash, unions have given up pensions for new hires at large, profitable, industry trendsetters such as General Electric, Verizon, Honeywell and now, Boeing.

Though this marks a sea change toward retirement insecurity for tens of thousands of U.S. workers during Obama's tenure, thus far the president has said nothing about the trend.

Dean Baker, co-director of the Center for Economic and Policy Research, says the president could use his bully pulpit on the issue. “Certainly he could say something about preserving DB pensions,” says Baker. “That wouldn't cost him anything, but apparently it is not even on his radar screen.”

Indeed, U.S. presidents have occasionally weighed in on or intervened in labor struggles, as when President Richard Nixon stepped into mediate the 1971 Bituminous Coal Strike. In 2008, then President-elect Obama spoke in support of the laid-off workers who occupied the Republic Windows and Doors plant in Chicago. Obama also publicly praised the United Auto Workers for making concessions as part of the auto bailout.

So why hasn’t the Obama administration said anything about an issue that affects so many Americans?

“They don't give a damn and don't want to piss anyone off over it,” says Baker. “It's pretty obvious that Obama doesn't feel the same obligation towards supporting unions as he does towards pushing the agenda of major corporations.”

While President Obama did not speak out on behalf of Boeing workers, the President is quite open about being a major public advocate for Boeing.

Speaking to the Export Council last September, President Obama said, “I think Jim [McNerney, Chairman and CEO of Boeing], at least, will confirm that I’m happy to go out and make sales. I’m expecting a gold watch—(laughter)—from Boeing at the end of my presidency, because I know that I’m on the list of top salesmen at Boeing. And that applies to all of you.”

EPI's Eisenbrey says that the Obama administration has been much more focused on cutting Social Security than shoring up American’s retirement security. Last spring, the Obama Administration announced its support for a proposal to amend Social Security known as “chained CPI,” which the AFL-CIO opposes because it entails lower benefits for retirees. “We should be increasing benefits and their proposal was to have a technical adjustment which was a benefit cut,” says Eisenbrey.

Working In These Times reached out to the White House for a reaction to the Boeing vote, but did not receive a response. As with many labor issues, the President has once again remained silent while union workers have taken a hit.

Meanwhile, Boeing workers are adjusting to less secure retirement futures. John Kleiboeker, a Boeing worker of 16 years and the president of the Machinists Local Lodge 63, told The Oregonian, "I've got 15 years to retirement. … I'm looking at a loss of $250,000.”

Full disclosure: The IAM and UAW are website sponsors of In These Times. Sponsors have no role in editorial content.