Despite Violence, Cambodian Workers Vow To Continue Their Fight 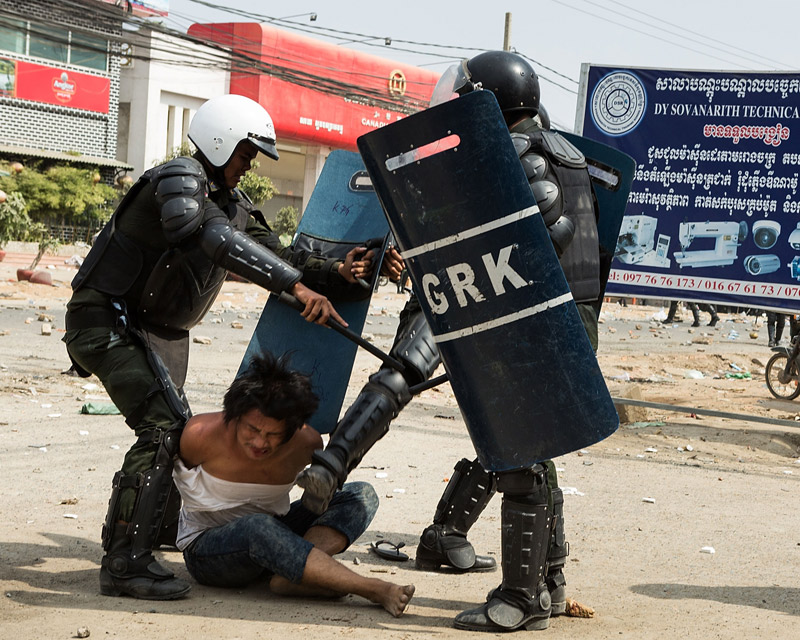 Five garment workers were killed and dozens were injured in the Cambodian government's January 3 crackdown on protesters. (Nicolas Axelrod / Getty)

Though Cambodia’s days of colonialization, war and genocide may be over, the country is still wrestling with political turmoil. At the start of the new year, when workers massed in Phnom Penh to demand a fair minimum wage, the government responded with a spray of bullets.

A major garment worker strike in December capped a recent groundswell of protest in the country's capital. After deeming insufficient the government's proposed hike of the minimum wage to $95, labor leaders aligned with the opposition Cambodia National Rescue Party to shutter factories and bring large crowds into the streets, concluding a year of labor agitation that saw more than 130 strikes.

Newly reelected Prime Minister Hun Sen—a former Khmer Rouge official whose legitimacy has been questioned amid accusations of rigging last summer’s election—took the protests as an opportunity to suppress both the pro-democracy and labor movements with one fierce blow. On January 3, police responded to protesters' bottles and petrol bombs with live ammunition, killing five and injuring dozens. More than twenty were detained, and some are reportedly still being held incommunicado.

On January 4, the government then forcibly cleared a major protest encampment in the city center; many workers have since returned to their jobs. Factories have also started to reopen after temporarily shutting down out of safety concerns. In the wake of the unrest, a coalition of rights groups, including Clean Clothes Campaign and International Labor Rights Forum, has called for an “immediate end to all violence and intimidation against workers and their representatives,” release of detained protesters and no charges against the strikers. Meanwhile, activists are continuing to push for the minimum wage to be raised to $160 a month.

Cambodian garment and shoe producers employ roughly 600,000 people in about 800 factories, and their business is eased by neoliberal trade policies with Western nations, particularly the United States. Yet these fashion powerhouses pay workers a pittance—generally as low as about $80 a month—compared to the profits they reap.

David Welsh, a Phnom Penh-based organizer with AFL-CIO’s international arm, the Solidarity Center, says the $160 minimum wage demand is the very least the garment industry could offer, especially considering some advocacy groups estimate that a living wage would be more than triple workers’ current pay. The Solidarity Center has been facilitating talks with the Labor Ministry and campaigning with local civil society groups for the detained activists. Along with other labor groups, the Solidarity Center has also raised concerns about a trend toward placing workers on so-called fixed-duration or short-term contracts, which tend to restrict job security for workers who came to factories seeking steady livelihoods.

According to Welsh, big retail brands foster a common media narrative that claims labor costs must be kept low to meet market demand. He explains that companies use the threat of pulling out of Cambodia if unions demand too much as a way to "discourage workers, to sort of say, ‘Do this or you'll be out of the job.'"

Realistically, though, Welsh says, “The amount of work that is being put into creating an incredible supply chain internationally … with foreign investors that are getting off like bandits, frankly, off the backs of impoverished Cambodian workers—the dynamic cannot continue."

In addition to low wages and precarious employment, activists have also recently highlighted the Cambodian garment sector's abysmal working conditions. A recent report by the U.K.-based Labour Behind the Label campaign revealed that many garment workers are clinically malnourished from being unable to afford adequate food (which costs roughly US $2.50 per day). Labour Behind the Label also reported a mysterious phenomenon of workers fainting en masse on the job—perhaps due to chemical fumes at workplaces, perhaps due to overall poor health or psychological distress. One worker quoted in the report explained, “We are constantly at the point of fainting. We are tired and we are weak. It takes only a few small things to make us faint.”

After tragedies like the Rana Plaza factory collapse last year, the public has started heavily urging companies to advocate for workers in their overseas supply chains. In Cambodia, the suppression of protesters has heightened that pressure even further. Joining the global chorus of condemnation from unions and the UN, several Western brands, including Gap and Adidas, have publicly criticized the government crackdown and expressed support for minimum-wage reforms “based on international good practices.” H&M also recently announced a plan to negotiate a “fair living wage” for Cambodian and Bangladeshi workers—but with the caveat that the company would first pilot the pay system in just three “model factories” and work toward full implementation by 2018.

Such progress would not be unprecedented. As we reported last year, workers at the Kingsland factory in Phnom Penh revolted after their factory was suddenly shut down without paying owed back wages. Workers partnered with the Solidarity Center and local activists to broker a $200,000 settlement with the owners and their multinational clients—demonstrating that there is a labor infrastructure in place that could serve as an model for organizing and collective bargaining in Asia’s garment workforce.

Ultimately, however, labor advocates argue that piecemeal reforms will not satisfy demands for justice across a global manufacturing chain: All foreign investors must stop chasing profit margins in places with low wages and few safety regulations. Instead of this “race to the bottom”, Welsh says, brands should commit to “remaining in an industry where trade unions are allowed to operate ... without reprisal, without legal suits, without detention."

Today, he says, modern international investment still clusters in countries “where the rule of law is incredibly weak, and where people are in such dire economic straits that they find themselves forced to work under [almost] any conditions.”

As Kun Sothary of the Messenger Band, a collective of women garment workers representing workers across many industries, told Asian Correspondent, "We learned of the common problems of garment workers, sex workers and farmers through our field visits … poverty, exploitation and human right violations ... We are all the same victims of a free trade system and development that is not ethical.”

Overall, reorienting the ethics of Cambodia's economy will be key to ensuring the liberty of its citizens. Though Cambodia's strikes may be subdued for now, the turnout in the streets has shown that the driving force behind the country's industry is people power—not brand names.