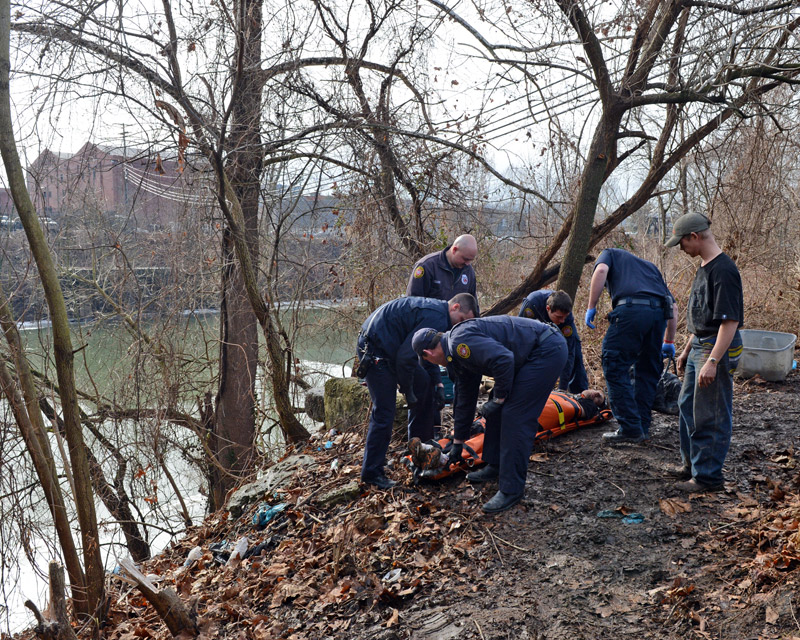 Paramedics in Charleston respond to a man found unresponsive on the banks of the Elk River, where a recent chemical spill contaminated the drinking water for more than 300,000 people. (Tom Hindman / Getty)

WASHINGTON, D.C.—“This is an issue of proportionality,” says Dr. Gerald Poje, a former member of the federal U.S. Chemical Safety Board, as he watches me get patted down by a security guard on my way into a session of President Obama’s chemical safety task force on Tuesday.

“How are we proportioning our larger social resources for security and safety?” asks Poje while I put back on my belt. “We come into a government building just for a public hearing, and we have half a dozen people at the front gate doing checking. Then you look at what’s missing in our high-hazard chemical infrastructure.”

Poje is referring to the failures of regulators to take sufficient steps to prevent the West Virginia chemical spill, which cut off the drinking water supply for more than 300,000 people for the better part of the past week.

Closer communication between government agencies could have prevented the chemical spill from infecting the water supply, Poje says. Complying with a 1986 federal law, Freedom Industries filed a form in February 2013 letting local and state officials know that the company was storing a potentially harmful chemical, 4-methylcyclohexane methanol (MCHM), at a warehouse facility on the Elk River. But regulators did not use the information to develop a response plan in the event of a chemical spill.

Such a plan would typically include working with the local water utility to prevent or mitigate any potential water contamination. Instead, West Virginia American Water President President Jeff McIntrye, whose water treatment plant is located 1.5 miles downstream from Freedom Industries’ chemical storage facility, seemed at a loss when the spill occurred. He told the Charleston Gazette on Friday that “his company didn't know much about the chemical's possible dangers, wasn't aware of an effective treatment process, and wasn't even sure exactly how much 4-methylcyclohexane methanol is too much.”

Ironically, the federal Chemical Safety Board (CSB) foresaw just such a regulatory breakdown in the Kanawha Valley region of West Virginia where the spill occurred (which is nicknamed “Chemical Valley” for its many chemical plants). Prompted by an August 2008 explosion and fire that killed two workers at the Bayer CropScience plant in Institute, W. Va., the CSB made specific recommendations in 2011 about how various state and local regulators could better coordinate to protect residents. The CSB urged regulators in Kanawha Valley to adopt a plan called “Hazardous Chemical Release Prevention Program," modeled on a plan in Contra Costa, Calif.

However, the state opted not to follow the CSB’s recommendations. According to the Charleston Gazette, “In June 2011, then-[West Virginia Department of Health and Human Resources] Secretary Michael Lewis told the CSB that his agency and the state Department of Environmental Protection had decided not to move forward with the CSB recommendation.”

The communication problems ring eerily similar to those leading up to the West, Texas fertilizer plant explosion that caused 15 deaths last April. While at least two state agencies—the Department of State Health Services and the Texas Commission on Environmental Quality (TCEQ)—knew that the plant was storing 1,350 times the legal amount of ammonium nitrate, neither of them informed the two federal agencies tasked with regulating the plant for threats of explosion: the Department of Homeland Security (DHS) and Occupational Safety and Health Administration (OSHA). Federal regulations would have required the plant to install safeguards like firewalls, which could have prevented the blaze that ignited the explosion from spreading.

For workplace safety advocates, the West Virginia chemical spill seems like déjà vu all over again.

“Nobody likes to hear, ‘I told you so,’ but in the case of last week’s chemical leak in West Virginia—responsible for hundreds of thousands of residents being left for days without access to clean water—it is impossible not to point fingers,” Tom O’Connor, executive director of the nonprofit National Council for Occupational Safety and Health, wrote in an email to Working In These Times as news of the chemical spill unfolded.

Nor are West Virginia and West, Texas, isolated examples, according to the workplace safety advocates who spoke at the Improving Chemical Facility Safety and Security public hearing on Tuesday, hosted by the federal Chemical Facility Safety and Security Working Group. In the wake of the West disaster, President Obama issued an executive order last year to form the working group to explore how better coordination between regulators could minimize the risks of chemical plants. At the session, many advocates emphasized that such problems of coordination are easy to fix and could save lives, yet don’t occur.

In 2009, House Democrats even passed a bill that would give federal regulators, primarily DHS and the Environmental Protection Agency, more power to effectively monitor potentially hazardous chemical facilities. But the legislation, which would also have forced companies to implement “inherently safer technologies,” died in the Senate without a vote.

Again and again, workplace safety advocates interviewed by Working In These Times on Tuesday cited a single cause of why such efforts die on the vine: media amnesia. Once a disaster is over, reporters turn their attention away from such unsexy topics as chemical plant safety, and industries lobby for regulatory changes to be killed in the dark.

“This kind of an issue dies behind closed doors,” says Greenpeace Legislative Director Rick Hind, a 30-year veteran of regulatory battles in DC. “When you talk to people in these agencies, they start repeating things the industry is saying. [They] need to be inspired to have the courage to embrace these policies that the public will support.”

Many advocates cited the statistic that Americans are about 270 times more likely to die in a workplace accident than an act of terrorism, according to 2011 statistics. They noted that the simple communication fixes that could save workers’ lives and prevent leaks get nowhere near the coverage that terrorism does. That is, unless the two issues dovetail: The World Trade Center attacks raised speculation that without proper storage and safety measures, chemical plants could be easy targets of future terrorism.

“After 9/11, almost every major media [outlet] covered this problem and this threat and the solution,” Greenpeace’s Hind says. That coverage helped to build support behind the chemical safety bill that fizzled in the Senate in 2009. Now, says Hind, “I think since the time when the House bill passed in ‘09, there has barely been a story about it.”

With the prospect of a simple regulatory fix on the table, Hind says that unless the media pays attention, life-saving reforms are unlikely to occur.

Hind feels that Obama has set up the listening sessions, which will go on across the country this spring, in order to attract attract media attention and build public support for regulations that could possibly be opposed by some in industry. The sessions in DC were held less than a week after the West Virginia chemical spill and featured a half dozen top regulators from different agencies, including OSHA and the EPA, as well as many key industry lobbyists, workplace safety advocates, small business owners and families of workplace accident victims—yet failed to attract much media attention. According to OSHA spokesperson Lauren North, In These Times was the only publication to send a reporter to the public comment hearing.

“The media dots every ‘i’ and crosses every ‘t’ when it comes to the Pentagon budget, for example, but they are either AWOL or the lack the resources to do it here,” says Hind.

Poje also argues the media could do more to examine issues pertinent to public welfare. "This is very low-hanging fruit of raising the level of public safety and scrutiny," he says. "I think the media could be asking the hard questions."