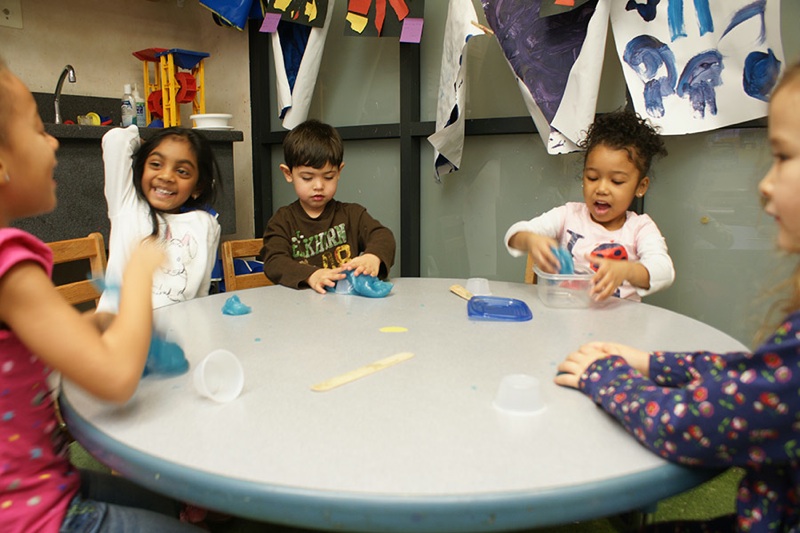 Expanding pre-K services to all eligible 4-year-olds in the city—perhaps as many as 50,000 kids—would cost an estimated $340 million, both to enroll new students and to expand half-day programs. Back in the late 1990s, New York state led the country in boosting public pre-K with a law mandating universal access, but since then districts have failed to fully fund this measure, and New York City’s school system falls far short. De Blasio proposes to fund his program with a “rich tax” that would bring in roughly $530 million. The balance of the money would be invested in afterschool programs for middle-schoolers.

The program is a popular one across party lines. Reams of research show that investing in preschool for all children can dramatically shrink “achievement gaps” across racial and economic lines. And it may also pay fiscal dividends: According to the progressive think tank Economic Policy Institute, “High-quality pre-kindergarten benefits government budgets by saving government spending on K-12 education, child welfare, and the criminal justice system, and by increasing tax revenues.” Even conservatives, generally skeptical about anti-poverty programs, can at least value the idea of pre-K as a welfare supplement to alleviate the childcare burdens of parents who might otherwise be working more hours. And community groups, teachers and unions have championed De Blasio's  initiative, focusing on the promise of much-needed resources to serve more pre-school students with more comprehensive programs.

While advocates generally see universal pre-K in New York as a potential boon for the early-childhood education field—one of the few public-education sectors that's actually expanding nationwide in a time of severe budget cuts—some are concerned about whether the plan will meet the needs of both educators and students in struggling public schools.

First, the tax hike must be approved by New York Gov. Andrew Cuomo, who has expressed opposition. Even if it passes, it’s unclear what it will mean for teacher pay, since the $340 million estimate does not include specific salary figures.

So the numbers floated for New York are still in the air; but based on general research on effective early education, the city should reasonably aim for a student-teacher ratio of 10-to-1, with classrooms that would pair 20 pre-K students with a teacher and an aide, according to Conor Williams, an education policy analyst with the centrist New America Foundation and a former first-grade teacher in Brooklyn. To make the program effective in the long term, he says, the city will need to hire “a lot of really highly trained, effective people to do this work. ... Paying all of them a salary that's going to attract and retain talent is a tough one."

Professionals serving the youngest kids tend to be paid less than other teachers and are less likely to be unionized—only about 17 percent are in unions, far less than secondary and elementary school teachers. So the city long-awaited‘s big move toward universal pre-K raises the labor question of whether the program can equitably compensate teachers. This is a problem not just of workers’ rights but of education justice, since this workforce tends to reflect the racial and socioeconomic diversity of the neighborhoods they serve. Nationwide, more than 25 percent of preschool teachers are black and Latino, compared to just about 15 percent of high-school teachers.

There’s some reason for optimism that the move could spell better jobs for early childhood educators. Part of the reason for their lower pay and unionization rates is that, unlike other teachers, they work in varied settings, often in programs administered outside of regular public-school systems such as childcare centers and other community-based facilities. Universal pre-K could extend public-school salaries to educators and service providers outside of the current K-12 system. For example, while in-home daycare providers, a low-paying sector that serves many poor preschool-aged children, might face some loss of enrollment, the upshot is that those workers may be able to expand to offer pre-K programming themselves. Then, according to Marcy Whitebook, director of University of California-Berkeley’s Center for the Study of Child Care Employment, “The question becomes, will there be some way for them to offer Pre-K services in their home, provided that they have the appropriate credentialing and training?”

Credentialling poses a major question in own right. Given that the city’s K-12 teachers are already overstretched, the city faces the challenge of filling the new pre-K jobs. This means developing thousands more teachers and staff, with the right training and know-how to run literacy exercises, playground sessions and arithmetic lessons for the most diverse 4-year-olds in the world. Pointing to successful workforce initiatives that have started at the state level, the National Association for the Education of Young Children’s workforce policy blueprint calls for specialized pedagogical training and expanded access to certification and degree programs where current workers in the field can upgrade their skills.

For now, however, the main question for New York's pre-K advocates is whether this program can get the approval of Albany. One fear is that the design and funding of pre-K may become a sticking point in the perennial wrestling match between teachers’ unions and pro-privatization reform advocates. Gov. Cuomo’s education reform commission (chaired, naturally, by a former Citigroup executive) recommended recently that the pre-K expansion include programs at charters, which would run counter de Blasio’s union-backed plans to block charter expansion. And de Blasio's rich tax flies in the face of Cuomo’s conservative-friendly tax-cutting program.

Should the rich tax fail to pass or the funding otherwise come up short, it’s not just teachers who could suffer: Inadequate resources could result in substandard education or a program that is not truly universal. Nationally, funding has historically been inconsistent, and in some districts, limited pre-K funds are specifically targeted toward programs serving poor students. For Whitebook, the question is, “Really, how many of the kids are you going to serve, and how much are you going to spend per kid?”

There is a more complex case to be made for truly universal pre-kindergarten, rather than programs targeted explicitly to low-income families, such as Head Start. Amy Rothschild, a fellow with Teaching for Change, writes in the Hechinger Report about her preschool teaching experience as a rare social space that cut across traditional class divides:

When an affluent family from the suburbs grappled with a child’s illness, a family on public assistance brought them frozen lasagna to ease the burden. During morning drop-off, college-educated parents discussed summer enrichment options with parents who worked as seasonal day laborers.

Can pre-schoolers teach grown-ups, including politicians, how to play well with others? Even a 4-year-old understands that good schools are those that imbue fairness and compassion—and the best are those that teach by example.