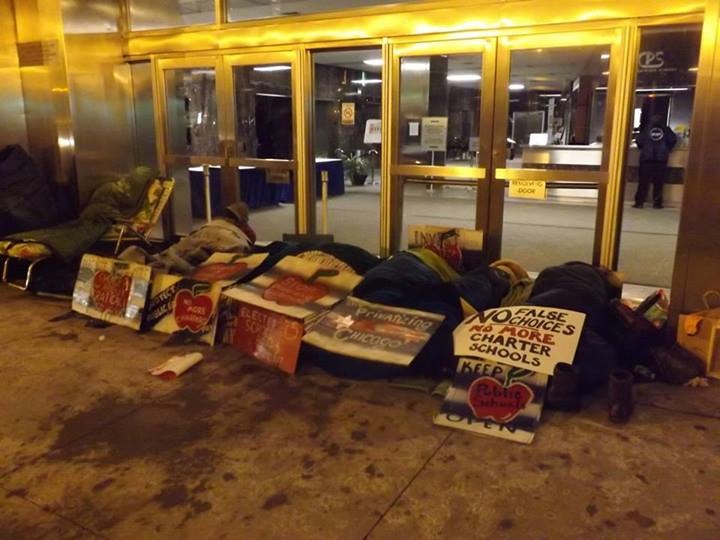 The CTU vigil outside the Chicago Public School's headquarters lasted until they were removed by the Chicago police at 7a.m. (Chicago Teachers Union Facebook)

On Tuesday night, a few dozen die-hard Chicago Teachers Union members and students braved the bitter cold to hold an overnight candlelight vigil outside the Chicago Public School’s downtown headquarters, protesting the expansion of charter schools in the city.

“This is the right time for us to be out on the sidewalk, here in 11 degree weather,” announced CTU organizer Christel Williams. “Charter schools are a racket and we know it.”

The protestors circled CPS offices holding candles in one hand and colorful signs with slogans like “Stop Privatizing Our City!” and “Parents Need More Choice? How About a Democratically Elected School Board!” in the other. Currently, the school board is appointed by Mayor Rahm Emanuel.

In spite of the so-called polar vortex sweeping over the Windy City, a few dedicated souls even camped outside headquarters overnight until the CPS Board of Education arrived Wednesday morning to consider adding 17 new charter school campuses from eight separate charter networks.

But the board, following the recommendations of CPS officials, voted to approve seven of the charter applications.

Jackson Potter, a CTU spokesperson, said that the outcome was disappointing to the union. But he added that, since only seven of the 17 were approved, “I do think there are some cracks with the light getting in. ... I think the district is coming under increased scrutiny for the inability to balance existing schools with charters."

Conceived as an experiment giving teachers and principals autonomy from district-wide curricula, labor leaders such as long-term American Federation of Teachers President Albert Shanker once saw charter schools as theoretically liberating to their members. In recent years, however, charters have become Public Enemy No. 1 for unions throughout the country.

Despite the early promise of charters for labor, their faculties continue to be almost entirely non-union. Moreover, there is arguably little evidence charters improve student performance, while there is plenty to show charters weaken organized labor.

Chicago began to build charters in 1997; they now make up 138 of the district’s 658 schools. The school board recently opened 15 new charter campuses after closing 48 neighborhood public schools in summer 2013.

Stephanie Farmer, an assistant sociology professor at Roosevelt University in Chicago, points out that Chicago teachers are increasingly becoming non-union. “Because CTU has fewer members than they did 10 years ago, charter schools diminish the bargaining power of the CTU, at least in the short term,” Farmer said.

Though a few charter schools have started to organize, Farmer argues, “Even if charters unionize, they will still have different bargaining units, which limits both CTU and charter school bargaining power.” According to Farmer, a larger bargaining unit tends to result in a more powerful union—and, in turn, better wages and benefits in contracts.

Brian Harris, president of the Alliance of Charter Teachers and Staff, or ACTS, which organizes Chicago charters, agrees with Farmer. According to Harris, each unionized charter network hashes out its own contract with teachers. For his part, Harris would strongly prefer having the collective power of all Chicago teachers, or at least all Chicago charter teachers, bargaining together.

“Unity always results in better outcomes for workers,” Harris says. “I think it’s best for teachers when they are all organized under the same contract.”

Meanwhile, CTU’s opposition to charters has grown even more heated in the past year.

Following their closures of public schools CPS judged “underused” due to a lack of student attendance, CPS then raised eyebrows in August 2013 by issuing a formal request for charter school proposals. CPS specified that it wanted charter schools in northwest and southwest Chicago, parts of the city that are near overcrowded neighborhood schools. But only five of the 17 new charter campuses under board consideration are in these overcrowded zones.

In addition to forcing some students into overcrowded environments, the union feels that new charter campuses could actually create counterproductive competition with neighborhood schools over students and funding.

Kassandra Tsitsopoulos, a high school teacher at Prosser Career Academy on the far West Side, formally petitioned CPS not to let Noble Network Charter School build a campus one block away from her school, one of the seven proposals the board approved. “It is poor city planning,” Tsitsopoulos said. “You wouldn’t put two hospitals across from each other.”

Meanwhile, an unfolding scandal at the United Neighborhood Organization (UNO) charter school network has emboldened the union’s past claims that politically connected insiders play major roles in running charters. For example, CTU President Karen Lewis has accused charter network board members (like Illinois gubernatorial candidate Bruce Rauner) of being opportunistically interested in the lives of minority children in order to accomplish objectives such as weakening unions.

But even as Rangel’s travails shook the network’s faith in its leadership, they also delivered the charter teachers’ union a major victory. Harris said that after the bad press of the Rangel incident, UNO did not offer resistance to a unionization campaign. The first contract is now in the process of negotiation; unionization of UNO’s schools would nearly double the number of ACTS-represented campuses from 14 to 27.

Harris, though, was adamant that unions and charters cannot ultimately exist in harmony.  “A lot of charter schools are operated by people ideologically opposed to unions,” Harris said in an interview Tuesday. “With the exception of UNO and one other school, we have had management fighting us tooth and nail to prevent us from unionizing.”