Obama Promises $10.10 an Hour to Federal Contract Workers, But Details Are Fuzzy 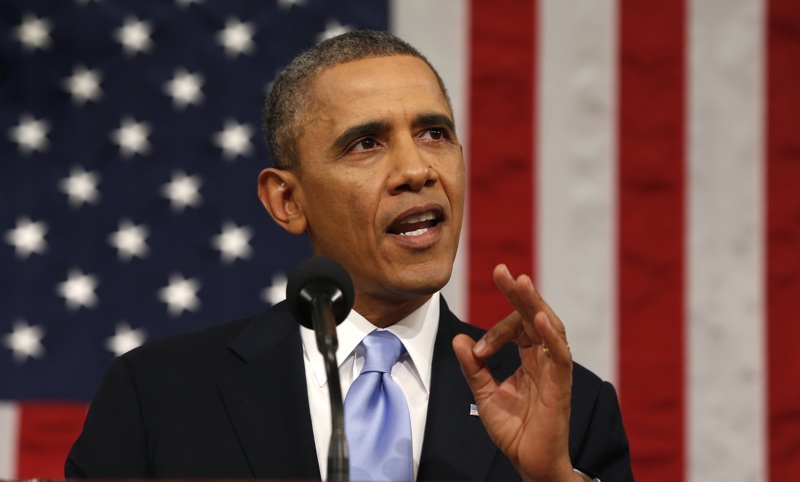 Barack Obama announced a minimum-wage raise for federal contract workers in his State of the Union address. (Larry Downing/AFP/Getty Images)

President Barack Obama announced Tuesday he would order an increase in the minimum wage for some workers indirectly employed by the federal government, drawing praise from labor union supporters and scorn from one top Republican Party opponent.

“In the coming weeks I will issue an executive order requiring federal contractors to pay their federally funded employees a fair wage of at least $10.10 an hour—because if you cook our troops' meals or wash their dishes, you should not have to live in poverty,” Obama said during his State of the Union address. The promise was accompanied by an exhortation to Congress, state and local legislators, and private companies to take their own steps to raise minimum wages.

The White House has been short on the details of the executive order (and has not returned Working in These Times’ calls for comment), and even Obama supporters are largely unclear about its direct impact.

Amy Traub, a senior policy analyst at the pro-labor think tank Demos, estimated that the executive order would raise wages for “hundreds of thousands” of workers over time, but was unable to be more specific.

“There are limits to an executive order,” she explains. “It has to be only for new contracts or renegotiated contracts”—so workers currently employed at very low wages by federal contractors won’t be immediately affected, she says. The final details of the executive order document will be important, she adds, as it will likely detail exemptions and set out the schedule for implementation. “But this will have an affect on food service workers, construction workers, security guards, groundskeepers and many, many other low-wage workers, so this is definitely a step forward,” Traub says.

By contrast, Speaker of the House Rep. John Boehner (R-Ohio) was openly scornful. He was quoted by NBC News saying that Obama’s “announcement, you should all know, affects no current contracts, only future contracts And somebody might want to ask the White House, ‘Well how many people is this going to affect?’ Because I suspect it affects absolutely no one.”

Boehner is wrong, says Joseph Geevarghese, deputy director at the Change to Win labor federation, though “it’s legally complicated, that is a reality,” he tells Working In These Times. “There really isn’t a ‘one size fits all’ executive order.” Federal contracting is a vast, complex and often opaque process, he says, so improving incomes across the board for low-wage federal contract workers could take multiple executive orders and will certainly require a sustained effort by the White House.

Change to Win’s goal is to have the executive order, or orders, cover three elements of the federal contracting process, he explains. “First, there should be a living wage, and $10.10 is just a start. Then we have to have compliance so the scofflaws are punished. And then we have to have system for collective bargaining, so workers can bargain for themselves, instead of relying on government managers” for raises or improvements in working conditions.

Mary Kay Henry, president of the Service Employees International Union (SEIU) underscored this point in her response to Obama’s speech: "While raising these wages is a good start, it won't solve the problem by itself. The best way for workers to thrive is by bargaining with their employers for better wages and a shot at a better future.”

“We consider it a win,” he said, “and a building block for the struggles to come.” Grijalva and the Congressional Progressive Caucus have been prominent backers of the Change to Win campaign and have lobbied Obama to sign an executive order on federal contract workers.

“Congratulations are due to the workers” who walked off the job at federal installations in Washington, D.C., last year to agitate for higher wages and publicize the issue, Grijalva said. One of those workers, Alexis Vasquez, a food worker at the McDonald’s restaurant at the Smithsonian’s National Air and Space Museum, said on this morning’s press call that the promised executive order made him “glad to know that Obama is on our side, not Ronald McDonald’s side.”