A House Is Not a Home Without Rights for Care Workers 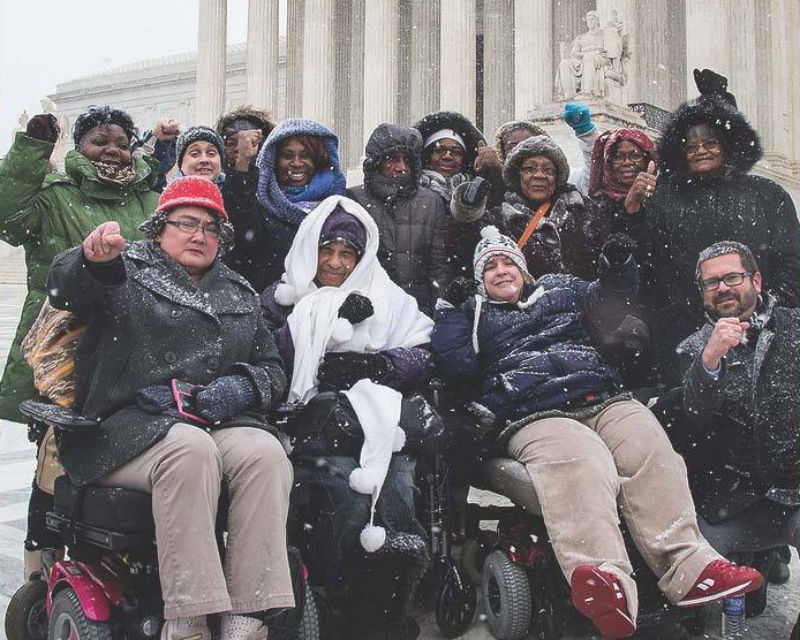 Does a public union belong in the most private of workplaces? Thousands of personal care workers in Illinois who tend to elders and people with disabilities at home wouldn’t have it any other way. For years, they’ve relied on the Service Employees International Union (SEIU) to negotiate their contracts. But a radical anti-union movement has gone to the Supreme Court to challenge care providers’ right to organize—putting hard-won labor gains in serious danger.

The case now before the court, Harris v. Quinn, started with a class-action lawsuit filed in 2010 by several care providers in a state Medicaid-financed program for people with disabilities. The plaintiffs argue that their automatic incorporation into a public sector union—with the requirement to pay dues—violates their free speech and free association rights.

The litigation, which lost first in a federal district court and later in the Seventh Circuit Court of Appeals, stems from the political agenda of the anti-union National Right to Work Legal Defense Foundation, whose representatives are arguing on behalf of the plaintiffs. In the past, the group has led campaigns in various states to push “right to work” legislation that undermines the dues obligations unions rely on to finance their operations. This time, it’s attempting through the judiciary system to weaken the collective bargaining authority of public-sector unions.

In 1977, a Supreme Court decision mandated that unions named as the bargaining agent for a group of workers must represent all of them. In turn, those who benefit from unions’ negotiations with employers must pay their “fair share” of the cost in the form of dues. If the Defense Foundation’s challenge succeeds, it could nationally damage this “fair share” precedent, thereby eviscerating unions’ financial resources. And on a statewide level, home care workers would be left with less protection in the workplace and less leverage to negotiate as a group.

The workers at the heart of Harris are an unusual group of public servants: They’re based in private homes as hands-on caregivers, yet they’re supported by taxpayer dollars. As state employees, they also enjoy working conditions that are a cut above a home healthcare typically industry characterized by low wages, high turnover and sparse benefits. Unlike many nannies, housekeepers and privately employed home aides, some 20,000 SEIU-represented workers have a steady contract with the state of Illinois. And during the past decade, SEIU has enabled its care providers to gain access to professional training, a new healthcare fund and a 65 percent wage hike.

But Flora Johnson, a home care provider and chair of SEIU Healthcare Illinois's Executive Board, testified recently that a Legal Defense Foundation victory could threaten those advancements.

“After we became a union ... As working conditions improved dramatically, so did the quality of home care for seniors and people with disabilities,” she said. “We can’t afford to go back to the bad old days—the days when home care workers were living in terrible poverty, and when seniors and people [with] disabilities were forced into institutions because they couldn’t find consistent care.”

When care workers in Illinois and other states first began organizing in the 1970s and ‘80s, labor activists argued that happier workers made for happier clients. To that end, they campaigned for “consumer-directed care,” which permits the state to pay employees but enables clients to supervise aides on a day-to-day basis. This framework allows seniors and people with disabilities to live independently while receiving publicly financed but individualized services like managing medications, cooking, bathing or arranging a visit with grandchildren.

For Areesa Johnson, a personal care worker with SEIU, that strategy has raised the standard of jobs and services alike.

“As more people see home care work as a way to provide for their own families while also making a difference in the lives of other families,” she argued in a testimonial responding to Harris, “turnover goes down and the quality of care for our clients goes up.”

Eileen Boris, a feminist studies scholar at the University of California, Santa Barbara, says such a system does necessitate a representative labor organization. When it comes to questions of working conditions and compensation, she says, “individual receivers of care cannot negotiate, just like an individual worker cannot negotiate” broader concerns—which makes unions an ideal mediator on issues like salary, hours and benefits.

Unfortunately, this combination of private and public service also makes care assistants a ripe target for attacks on workers and unions. Caregivers, who are disproportionately women and of color, have historically been seen as casual “companions,” not laborers. Indeed, it was only last year that the White House finally extended basic minimum wage and overtime protections to all home health aides under the Fair Labor Standards Act. At the same time, the right often dismisses unionized public servants as overpaid paper-pushers.

Meanwhile, unions have not even reached most workers in the rapidly growing home healthcare sector; many are employed by private households rather than a state program or staffing agency, and thus cannot collectively negotiate a contract with colleagues. Overall, median annual income for home care aides—including unionized ones—was only $17,000 in 2011. And while they work around the clock to provide clients every possible comfort, a large portion are uninsured; about half depend on public benefits like Medicaid and food stamps.

Sarita Gupta, executive director of the advocacy group Jobs With Justice, tells In These Times via email that the fate of all care workers is at stake in the Harris case, whether or not they’re members of a union:

Forming a union is one of the only ways that workers in these jobs have been able to have a voice and a pathway out of poverty. … Limiting the ability of a state to collaborate directly with home care workers on common sense solutions to meet their own growing workforce needs sets a terrible precedent for both workers and consumers—and this holds true for both public and private sector.

Despite what the Harris plaintiffs contend, the ideological opposition to collective bargaining isn't about individuals’ “freedom” to choose to join a government union. Rather, the case is endangering a labor structure that benefits clients and workers alike.