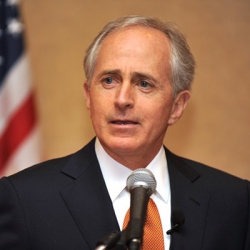 Some Tennessee leaders say Senator Bob Corker is publicly opposing union drives in order to help with his climb up the political ladder. (Wikimedia Commons)

On Monday, the United Auto Workers announced that they had filed for an election with the National Labor Relations Board to represent 1,600 workers at Volkswagen’s Chattanooga facility. The voting for the closely watched union election will be held from February 12 through the 14. And despite a Grover Norquist-backed political operative’s plan to spend hundreds of thousands of dollars on challenging the workers’ move to organize, Volkswagen itself is not opposed to the union drive.

“Volkswagen Group of America and the UAW have agreed to this common path for the election,” said Frank Fischer, chairman and chief executive of Volkswagen Chattanooga in a statement. “Volkswagen is committed to neutrality and calls upon all third parties to honor the principle of neutrality.”

Senator Bob Corker (R-Tenn.) also claims to share in that vision of neutrality. When asked about the election, he sent a statement to the Detroit Free Press that read, “During the next week and a half, while the decision is in the hands of the employees, I do not think it is appropriate for me to make additional public comment.”

Workers were optimistic that Corker’s statement could signify broader support for the union across the board. “I think this is awesome!” Volkswagen employee Byron Spencer wrote in a Facebook message early Tuesday morning. “I think this is a real sign we are gaining momentum here and Corker is changing his tune as wind changes direction.”

And such a sentiment is arguably out of character for Corker, who has spent the past six months campaigning vigorously against the union’s expansion at Volkswagen. "For [Volkswagen] management to invite the UAW in is almost beyond belief," Corker told the Associated Press in a widely cited interview in September. “They will become the object of many business school studies—and I'm a little worried could become a laughingstock in many ways—if they inflict this wound."

In addition, Corker has frequently referred to his experiences touring the unionized GM plant in Spring Hill, Tenn. as evidence against organizing in Chattanooga. When the UAW tried to say it would be able to work closely with VW management on a newly designed “works council,” Corker told Chattanooga Times Free Press that he doubted this would happen, given that they were “the exact same people who organized Spring Hill … I don't know how they can say they're the new UAW when the same people ... are in leadership," Corker said.

"I wish that people who care about this issue could have been inside the GM plant at Spring Hill … the environment that the UAW has created is sad to watch,” Corker also told the local online news magazine Nooga.com in September 2013.

But Tennessee leaders say Corker hasn’t always regarded union drives as such an economic death knell. In fact, on one of the occasions that Corker toured the unionized GM plant in Spring Hill, he called the experience “uplifting”—a far cry from the “destructive force” he once claimed the UAW had on the establishment. According to GM Spring Hill UAW Unit chair Mike Herron, Corker seemed to be very supportive of the plant operations, which are governed by a “co-management” board that has been in place between the union and management since the 1980s.

In a never-before-released video provided to In These Times by Herron, Corker said, “You know, you hear a lot about different kind of issues, but there is nothing like being here on the ground and sensing firsthand the excitement about the future here. ... I read three newspapers a day and get inundated with all kinds of other information, but it’s others looking at this company from the outside.”

“To be here today has been most uplifting to me,” he continued, “and it really will affect me as to how I approach some of the issues into the future knowing that this company is investing ... in employees to make sure that it leads the way into the future. After being here, it even more so makes you want to … [put] in place policies ... that cause companies like this to thrive."

Given a period of two months to respond, Senator Corker’s office would not clarify to In These Times why he went from sensing the plant's "excitement about the future" in 2007 to telling the AP in 2013 that he found it to be in “not a healthy situation."

For his part, Herron says that Corker also made no move to support workers during the plant’s struggles during the height of the economic recession. In 2009, the Spring Hill assembly line was closed, and 2,000 unionized workers were laid off. Herron says that he "watched Corker do battle with the CEO of GM and the president of the UAW, instead of asking what would they would do for the automotive plant in his state if the loans were approved, like senators from other auto industry states did. These other states kept their plants open with product commitments, while the Spring Hill plant had the assembly line come to a halt in 2009."

In fact, the assembly line only re-opened in 2011 as a result of massive wage and benefit concessions made by the UAW—including accepting a two-tier wage system—that made it profitable for GM to take work from Mexico and transfer it to Spring Hill. And last year, GM announced that they were going to invest $350 million into the plant and add 1,800 jobs. All this is proof, Herron says, that the UAW is not hurting job prospects in Tennessee.

Meanwhile, Corker voted against the bailout that President Obama and the UAW widely tout as saving the auto industry, saying, "This administration has decided they know better than our courts and our free market process how to deal with these companies. … This is a major power grab."

Herron says that while other senators made an effort to keep their manufacturing sectors thriving, Corker did no such thing. “Senator Corker was right in the middle of the [auto bailout] hearings and there was a great deal of concern that we were not being appropriately represented at that level,” he says. “All the other elected leaders were making a pitch for their [local] plants—that  wasn't the case for our senator.”

Overall, Herron says, he’s dismayed by the senator’s turn toward severe anti-union sentiment during the past five years.

But not everyone is surprised by the transformation. Democratic political activists in Tennessee say the senator's increased anti-union sentiment stems from his desire to run for higher office. They claim Corker is trying to shed the label of a D.C. “dealmaker" slapped on him by publications like Politico. In order to shore up his support among grassroots Tea Party activists, they say, he’s publicly fighting the UAW.

Former Tennessee Democratic Party Chair Chip Forrester says that the 2009 bailout hearings represented a major turning point for Corker. As a relatively unknown freshman senator, he says, Corker was able to gain a regular rotation on the TV circuit when he opposed the UAW in the bailout. According to Forrester, Corker realized then that he could move up the ladder in the Republican Party by leading the charge against the biggest backer of the Democratic Party—organized labor.

“[In the past], he hasn't been voracious about stuff like that, and this is like a new twist. Generally, he has been on the moderate side. The whole ‘I am a union-busting kind of guy’ was never a part of his political character.” says Forrester. “There are a hundred guys and gals who get up in the morning and see ‘Mr. President’ in the mirror. Bob Corker is a short little guy with a big ego. I am sure he harbors that thought. ... Being anti-labor makes sense from that perspective.”

“For anyone who was around during the efforts to help stabilize the auto industry and save jobs at a time when they were reeling, this should be no surprise,” agrees Jim Manley, who was intimately involved in the auto bailout deal in the Senate as a top aide to Harry Reid (D-Nev.). “When Senator Corker first entered the negotiations, he appeared to be serving as an honest broker, but as pressure from some within his party grew, he started proposing one idea after another to stick it to the unions."

As for Corker’s alleged White House goals, Manley isn’t so sure. He thinks Corker may just be trying to move up in the Senate. “I’m not so sure if he has presidential ambitions, but I do know that he symbolizes the debate within a Republican Party that is still dominated by the Tea Party and conservative activists,” he says.

Overall, Corker’s motives for historically opposing the union aren’t clear. But for activists focused on winning the union election this February, it doesn’t matter. After all, while Corker may have a lot of political influence, he doesn’t have the ability to talk to employees all day long on the shop floor. With Volkswagen remaining neutral, that domain belongs to the workers—and ultimately, the decision on whether or not to join a union will be up to them.

“I think we have a damn good shot,” wrote Volkswagen worker Byron Spencer on Facebook as he prepared for his morning shift at the plant.  “[Volkswagen is] giving the union a chance to make a presentation at the all-team meeting today.”

Full disclosure: The author’s mother worked on an auto assembly line at a VW plant in Westmoreland County, Pa., until it closed in 1988, and was a member of UAW. UAW is a website sponsor of In These Times. Sponsors have no role in editorial content.