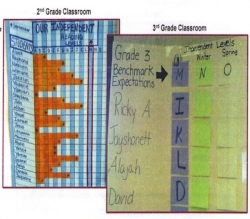 K-12 teachers in Holyoke, Massachusetts were instructed in a PowerPoint presentation to use 'data walls,' which track test scores of every student for all to see.

Last year, K-12 teachers in the Holyoke, Massachusetts school district were told to try a new tactic to improve test scores: posting “data walls” in their classrooms. The walls list students by name and rank them by their scores on standardized tests. This, they say administrators told them, would motivate children to try harder on those tests.

Teachers did so, many unwillingly. Agustin Morales, an English teacher at Maurice A. Donahue Elementary School in Holyoke felt pressure to comply, but finds the data walls cruel. One of his top students did poorly on a standardized test in November and found her name at the bottom of the data wall. Afterward, in a writing assignment for class, she “wrote about how sad she was, how depressed she was because she'd scored negatively on it. She felt stupid.”

“So why do I hate data walls?” he continued. “Because of how she felt that day. She felt worthless. She felt like she wasn't as good as other people.”

Morales isn't alone in opposing the data walls. They're widely seen as just the latest front in a war being fought by educators, parents and students nationwide against what teacher educator Barbara Madeloni calls “predatory education reform.”

Madeloni, a former English teacher, is perhaps best known for refusing, with her students at the University of Massachusetts, to participate in a standardized teacher-licensing program co-developed by Stanford University and testing behemoth Pearson. She's helping to grow a new movement in Massachusetts against a corporate school-reform ideology, pushed by a bipartisan alliance of politicians and business tycoons, that boils everything, including teachers' continued employment, down to test scores. She and Morales are members of Educators for a Democratic Union, a caucus within the Massachusetts Teachers Association that seeks to step up the union's fight against the corporate-backed reformers.

In Holyoke, teachers and parents flooded a school committee meeting (the equivalent of a school board) on February 3 to protest the use of the walls. Paula Burke, the parent of a third-grader at Donahue, called them “public humiliation” for children. But the teachers in attendance were surprised to hear Superintendent Sergio Paez, whom they say directed them to start using the walls, blame teachers for putting the names up. Arguing that he never intended the boards to be public, Paez said during the meeting, "I'm asking teachers to do hundreds of things, but I'm not asking them to humiliate kids… It's not whatsoever a directive from this administration to do this."

In response to his comments, the teachers released copies of a PowerPoint presentation given to teachers and paraprofessionals for kindergarten (yes, kindergarten) through third grade at Kelly Elementary School in Holyoke on October 11, 2013—at which Superintendent Paez delivered the welcoming remarks. The slides, provided to In These Times by teacher activists, clearly show sample data walls with students' first names and in some cases, last initials.

Morales says that administrators have been playing a “word game” for a while, saying that they “suggest” or “encourage” the use of data walls, but being cagey about whether they are mandatory or not. But teachers, he says, hear the message, “You better do this or you're going to suffer for it.”

The administration seemed aware that the data walls could be controversial. Jenna Kaeppel, a seventh and eighth-grade English teacher at Holyoke's Lt. Elmer J. McMahon Elementary School, says that the push for the walls has actually been hardest in kindergarten through third grade. “I think it's intentional,” she says, because younger students are less likely to talk about it to their families.

“The data walls really speak to a bigger problem,” Kaeppel says. The battle against data walls is just one fight in a broader war—everywhere, testing is replacing teaching time, and test scores are used to pressure students, to determine whether teachers can keep their jobs, and to rate schools as successes or as “failures,” with dire consequences. Morales points out that his students in Holyoke spend 27 days out of the 180-day school year taking standardized tests rather than learning.

Teachers take the blame for the problems with schools even when those problems—like poverty—are bigger than anything they can fix. That's why Morales has become more active within his union—he was recently elected political action leader of his local, and is part of its negotiations team as well. And that's also why he's a part of EDU and plans to vote for Barbara Madeloni for MTA president in this May's union election.

EDU is one of a growing number of activist teachers' union caucuses—such as CORE within the Chicago Teachers Union in Chicago and MORE within the United Federation of Teachers in New York—challenging the existing leadership within those unions to be more proactive in the face of the growing attacks on teachers. According to Madeloni, EDU began about two years ago, inspired in part by the decision of the leadership to accept Race to the Top funding. A conference held by the caucus last year attracted over 100 educators from the union.

“In Massachusetts, there's all this destruction happening, but it's not all at once, and so people are feeling it privately,” Madeloni told In These Times. Poorer districts, like Holyoke and Springfield, may get the brunt of the state-level reforms, with more tests added when scores stay low, while more affluent districts bear a lighter burden because their students score well on tests.

In Springfield, the city and schools are just now recovering from a “control board” that was installed by then-governor Mitt Romney in 2004 to reorganize the city's finances. Phil Dowgiert, an information technology teacher at Central High School in Springfield, Mass., and executive board member of his local, compared the control board to the emergency managers running Michigan's cities. Board members, he said, “had carte blanche to do pretty much what they liked.” The board, which was eventually dissolved in 2009, instituted a wage freeze on public employees, privatized some services, and brought the city budget from a deficit to a surplus.

During the wage freeze years, the schools lost some 1,325 experienced teachers who decamped for better-paying jobs elsewhere. The board may have turned around the city's finances, but several Springfield schools are still rated Level 4 by the state, on a scale of 1-5, which means they're subject to a “turnaround model.“ All the teachers have to reapply for their jobs, and only 50 percent will retain them. Even at Dowgiert's school, which is rated Level 3, he described the climate as “[Administrators] turning up the tune, making it go faster and faster and faster, so people are spending less and less time teaching and more and more time dancing. Kids are getting a lot less of what we would like to consider to be a full-breadth education, and they're getting a narrower and narrower and narrower education.”

The MTA, an affiliate of the National Education Association, represents teachers in most of Massachusetts (primarily outside of Boston), which means that its members are spread across many of the nation's best public schools and some of the worst, from wealthy suburbs to poor “gateway cities.” Bringing these far-flung teachers together on a common goal can be difficult—harder, say, than in one major urban area like New York or Chicago, where the same policies are being imposed on the entire union. Teachers have felt isolated in their individual towns, and the EDU members feel like the union has not made a united stand against the spread of reform.

“We've become accustomed to having a peacetime chief, and that's OK, I have nothing against anybody in particular,” Morales says. “But what I'm trying to get people to understand now is that we are at war. And we need a wartime chief.”

“Some [teachers] say, '[Reform] doesn't affect me because I'm not in Springfield,'” says Eugene Stein, a member of EDU and a teacher at South High School in Newton—an affluent, liberal Boston suburb. “We're lucky because we're in Newton, but we're maybe one superintendent away from not being lucky.”

Even in Newton, he notes, teachers are  “getting a real taste of being assessed.” The district accepted Race to the Top funding, which comes with a 43-category rubric on which the teachers will be evaluated, “smart goals” for achievement they're supposed to set, and statewide standardized tests to take. Adding these requirements to an already heavy workload has teachers too busy to fully understand what's happening to them.

Stein points out that nationwide, and certainly in Massachusetts, neoliberal education reform has involved attempts to blame unions for students' struggles and to make it easier to fire teachers. Even in Newton, where jobs have not been disappearing at the rate they have in poorer school districts, he believes the effects of reforms happening in poorer districts could “trickle down.” He tells his colleagues, “It could affect you, because you are part of this union and the rhetoric is about teachers as a whole.”

Dowgiert notes that despite anti-union rhetoric from those who say they want to improve schools, Massachusetts teachers are among the most heavily unionized in the country, and the states' schools are consistently rated the best in the nation.

Madeloni points out that the constant attacks on teachers come at a time when more and more is being demanded of them in the classroom. The speed-up during the day and the demands for more work leave teachers with simply no time and emotional resources left to fight what's happening. “That's the neoliberal agenda. People are experiencing it everywhere, our time has been taken away. I can't tell you how many people say to me, 'I'm with you, thank you for doing this, I can't do any more,' ” she says.

The constant exhaustion means that the union must prove to its members that a fight is worth the effort. That's why EDU is trying to build solidarity through concrete victories—like the effort to fight the data walls in Holyoke. Kaeppel, who was one of Madeloni's students at UMass, says that it seemed like a winnable fight to the Holyoke EDU members and their supporters from outside of the district, and has served to catalyze some parent support. Administrators, she says, assume that the lower-income parents in Holyoke are not involved with their kids' schooling and won't challenge school practices, but they got a surprise when parents and teachers spoke together at the school committee meeting. They plan to attend the next committee meeting later this month, where they've been told the issue of data walls will be addressed by the superintendent—and if it isn't, they will speak out again and again until it is.

Around the country, progressive caucuses within teachers' unions have found that it is indeed possible to gain traction with parents and communities, particularly by focusing on broader issues of inequality. EDU hopes to take its place within that movement—Madeloni is part of a national coordinating council of progressive caucuses.

“We don't know where we are in history. We could be really close to the thing that opens it all up,” she says. “We're tilling soil in various places, we're making connections.”