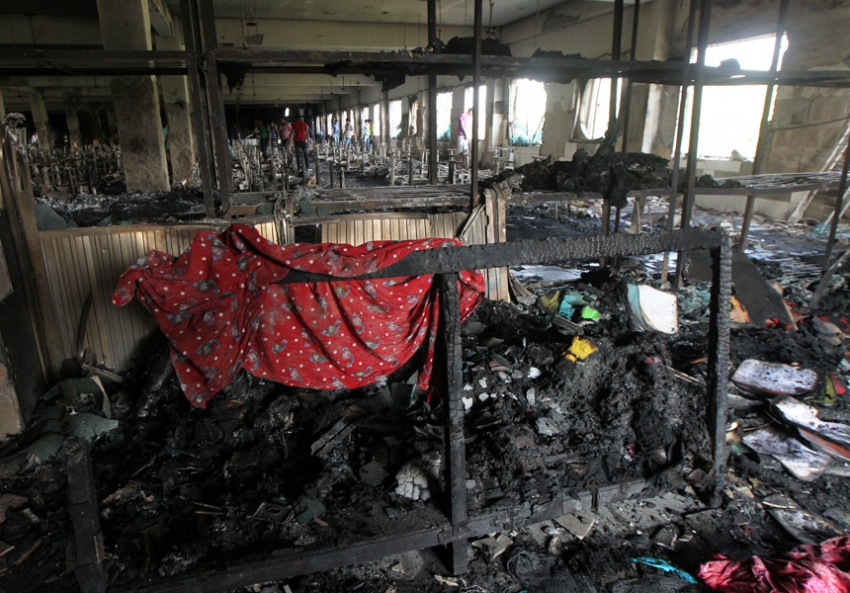 In 2012, the Tazreen factory fire killed 112 people. Strewn among the wreckage were garments labeled for sale in various U.S. retailers—including those run by the military. (STR / AFP / Getty)

A six-foot gash in the wall; charred corpses strewn amid the rubble of a collapsed building; families mourning nameless civilian casualties. Such tragic scenes are historically associated with the aftermath of military aggression, but these days, they also reflect a different kind of military assault—on labor rights. In Bangladesh, Uncle Sam is making the world less secure for workers, one sweatshirt at a time.

The U.S. military is notorious for being an ethically challenged institution, tainted by corruption and innumerable human rights violations at home and abroad. Now, a watchdog group says the military's clothing businesses are aiding and abetting massive labor exploitation overseas.

As we reported in January, major branches of the armed forces run an extensive apparel manufacturing network that contracts with U.S. firms and overseas factories through its procurement system—business deals with private companies to produce military-branded goods, such as Marines-logo sportswear. These patriotic-themed fashions are then sold through military-run retail outlets known as exchanges, which operate as mostly self-funded businesses and are therefore considered outside of the standard Defense Department budget (though, as a Pentagon operation, they are also taxpayer-supported).

These exchanges have established basic labor codes for contracted overseas producers, covering issues such as child labor, wages, hours, collective bargaining rights and safety. But as research by the International Labor Rights Forum (ILRF) shows, the military has displayed malign neglect when it comes to enforcing those codes, particularly in the garment manufacturing hotbed of Bangladesh, where sweatshops are rife.

The report, which ILRF released in mid-February, documents an epidemic of safety threats at factories that have supplied apparel to military exchanges: missing fire extinguishers, combustible materials kept near hot machines, a massively cracked factory ceiling, underpayment of wages and forced labor conditions. Physical or verbal abuse is commonly heaped upon workers, many of whom are women who have migrated to urban areas from rural communities. Workweeks at one factory lasted up to 80 hours.

At Citadel—a known producer for the Army and Air Force Exchange Service (AAFES) that employs about 700 people in its factory near Dhaka— a "social compliance" audit conducted by a specialized industry auditing organization found that half of workers did not wear protective dust masks. About two-thirds did not even wear shoes. ILRF investigators found that although the exchanges claimed to have verified the labor code compliance of these factories, they repeatedly left issues like these unaddressed.

In some cases, according to the ILRF, the exchanges blatantly ignored third-party accounts of the conditions in their supplier factories. For instance, the report states, “in several cases in this report, the Marine Corps Exchange requires only a factory self-attestation that it is ‘in compliance with all applicable labor laws’ with no substantiating evidence to support this claim." And even when the exchanges took the time to actually review third-party factory audits, the ILRF continues, the auditors themselves had often overlooked safety hazards and other workplace problems.

This shouldn’t come as a surprise to anyone who follows the various scandals in the fashion industry over big-name brands that profit off of sweatshop labor. In the past, activist and media investigations have revealed that factories supplying Western fashion brands, both private and military, have repeatedly received passing audit grades despite clear evidence of substandard working conditions.

And when auditors do report problems, companies often fail to take corrective action. At one of the most notorious disaster sites in Bangladesh, the Tazreen factory, past Walmart-commissioned audit reports of the factory had revealed major safety problems. However, these issues apparently went ignored until the factory caught fire in late 2012, killing 112 people. Garments bearing the Marine Corps-licensed brand were also found in the ruins.

Because of this reliance on third parties, ILRF Senior Policy Analyst Bjorn Claeson tells In These Times via email, “In terms of oversight, the military exchanges are, in effect, 'flying blind,' sourcing their private-label clothing from factories in Bangladesh without taking any independent action" on safety and labor issues.

At the Citadel factory, according to the report, AAFES based its approval of the facility on an audit done by Walmart, which has also sourced from Citadel. But attached to the probationary “passing” grade were documented safety violations “in every health and safety category, including missing fire certificates,” along with a one-year reprieve to allow for making improvements. Although AAFES had clear access to the information about the conditions, the IRLF states, it “did not raise concerns about the range of health and safety violations with the factory.”

In a response published in the ILRF report, an AAFES official, Gregg Cox, argued that its standard procedure of relying on third-party auditor ratings, along with subsequent follow-up inspections, was sufficient to verify compliance of factories like Citadel—a position that the ILRF sees as deeply inadequate for ensuring real protection for workers.

Meanwhile, any potential systemic improvement is also hampered within the factories themselves, thanks to an overarching climate of hostility to labor organizing and political oppression. One worker quoted in the ILRF report spoke of the consequences of organizing under the global manufacturing system's culture of silence: “Even if they break the laws, or the production quotas are too high, or we have too long working shifts we can’t raise our voices ... If we raise our voices we’ll be fired.”

The report also quotes testimony gathered by the Worker Rights Consortium from workers at the Coast to Coast factory, another supplier for AAFES, in which interviewees recalled a longtime finishing worker reportedly being fired after he spotted a fire in the boiler room and pulled an alarm. “Now, workers say they would be afraid to sound the alarm if there was a fire in the factory,” researchers report.

The ILRF report reveals how the Pentagon, despite its vast budget, rigid command structure and supposed culture of discipline, has repeatedly failed workers in poor countries at the dregs of the export market. Nonetheless, the ILRF argues the military must both take responsibility for its current factories and use their massive economic and political clout to set higher standards.

“Military exchanges have an obligation and an opportunity to define a new standard for social responsibility in their supply chains. With the support of the Administration and Congress, they can set an example through their procurement of private-label apparel and prod other brands that they sell in their stores to follow,” the report concludes.

Late last year, Reps. George Miller (D-Calif.) and Jan Schakowsky (D-Ill.) proposed legislation to compel military exchanges to follow stricter labor standards, including the provisions of the Bangladesh Accord on Fire and Building Safety. Though the initiative has stalled, public pressure has made some inroads: The Marine Corps licensing authorities recently announced they would adopt the Accord. And the ILRF and other labor advocates continue to campaign for greater accountability in the military's supply chains. Some lawmakers are currently pushing measures to expand congressional oversight of all the exchanges' compliance with fair labor standards.

If the military is so invested in selling its brand, its public-relations strategy ought to include protecting the workers who stitch its fashions from turning into collateral damage.