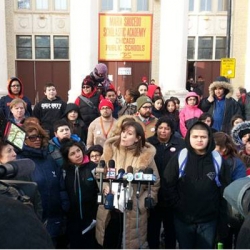 Sarah Chambers, a teacher at Maria Saucedo Scholastic Academy, will not be administering the Illinois Standard Achievement Test this year—nor will any of her colleagues at Saucedo. (Chicago Teachers Union)

Beginning Monday, teachers in schools all across Chicago are expected to sit their third- through eighth-graders down for two weeks of standardized testing. On students’ desks will be the Illinois Standard Achievement Test (ISAT), a state-level assessment that, thanks to the nationwide move to Common Core, won’t have any bearings on school ratings, grade advancement or instructor evaluations this year.

But teachers at Maria Saucedo Scholastic Academy and Drummond Thomas Montessori School, which joined the educator-led boycott of the ISAT last week, have declined to participate. Teachers from both schools say they are willing to risk disciplinary action so their students can get two weeks of teaching, not testing.

In response to their decision, Chicago Public Schools CEO Barbara Byrd-Bennett said in a letter this week that teachers who "advocate against the ISAT on work time"—referring, the Chicago Teachers Union believes, to an instructor boycott—risk disciplinary action. Although teachers say they have not encouraged any students to opt out of the test outright, Byrd-Bennett also wrote, "The State Certification Board may take action to revoke the certification of any employee who encourages a student to boycott the ISAT."

And some administrators have taken part in the pushback, too. In a letter distributed to teachers last week, the principal of Saucedo, Isamar Vargas Colón, wrote, “Failure to conduct yourself in a manner befitting your profession will subject you to serious disciplinary consequences up to and including termination of your employment and possible action by ISBE [Illinois State Board of Education] with respect to your educator’s license.”

In an email to Saucedo teachers sent over the weekend, Colón said she would ask each individual teacher Monday morning whether they would or would not be administering the test. Colón did not respond to requests for comment.

A teacher at Saucedo, who asked to remain anonymous for fear of retribution, says the warnings are particularly concerning for the handful of untenured educators at the school.

Overall, it is unclear to what degree CPS will discipline teachers. But the union contract negotiated following the Chicago teachers’ strike in fall 2012 includes a progressive discipline clause, which, among other requirements, forbids an employer from going to the harshest disciplinary action without probation and mandates warnings from employers.

The CTU has said it doesn’t consider the district’s reaction to be an “idle threat,” and is working with lawyers on the best ways to support boycotting teachers. Jesse Sharkey, vice president of the union, called the proposed disciplinary actions “really absurd and harmful.”

Nationwide, there are few precedents for the testing boycott, and none incurred any discipline against participating teachers.

Around the same time last year, teachers at Garfield High School in Seattle—alma mater of Jimi Hendricks and Macklemore—voted unanimously not to administer the standardized Measures of Academic Progress test. Like in Chicago, Garfield teachers had the support of the many parents who had also chosen to opt out their children.

Though teachers at Garfield were initially threatened with a ten-day suspension, the Seattle Public Schools superintendent eventually backed down when several other schools joined the boycott.

In 2002, a group of teachers in Chicago at Curie Metropolitan High School boycotted the Chicago Academic Standards Exam (CASE), despite the risk of losing their jobs, because, they argued, the test took away valuable instruction time.

The test had been an issue of contention for years, and even led to the firing of one teacher who published the test in its entirety in Substance News, a teacher-run education newspaper. Eventually, district administrators, including now-Education Secretary Arne Duncan, agreed to drop the CASE and develop a new test.

Even at schools where the test is still being administered, many students and parents decided to join the boycott. More Than a Score, a national anti-high-stakes-testing group of parents and community groups, says that more than 1,000 students across the city have opted out of the ISAT tests this year. A spokeswoman for CPS confirmed that students who opted out of the test wouldn’t have to take it, but was not able to give a definitive number of opt-outs.

Teachers, for their part, say the opt-out process was rife with disinformation and confusing signals for students, parents and instructors. In a voicemail message directed to parents and obtained by In These Times, Saucedo principal Colón said, “ISAT testing doesn’t take away two weeks of instruction …  [it] will prepare out students to take next year’s Common Core-aligned questions … also helps our school tailor better instructions.”

These claims have been refuted by Saucedo teachers in their arguments against administering the ISAT: They say the test takes more than two weeks, because teachers must help students prepare for it, and that it does not assist in educational planning in any way.

Zerlina Smith, a Saucedo parent, says she believes the teachers have the students’ best interests at heart; she hopes the ISAT boycott will go down in history as a successful one. “We send our kids to school to learn,” she says. “We put our kids in the hands of these educators, and we have to trust their decisions.”