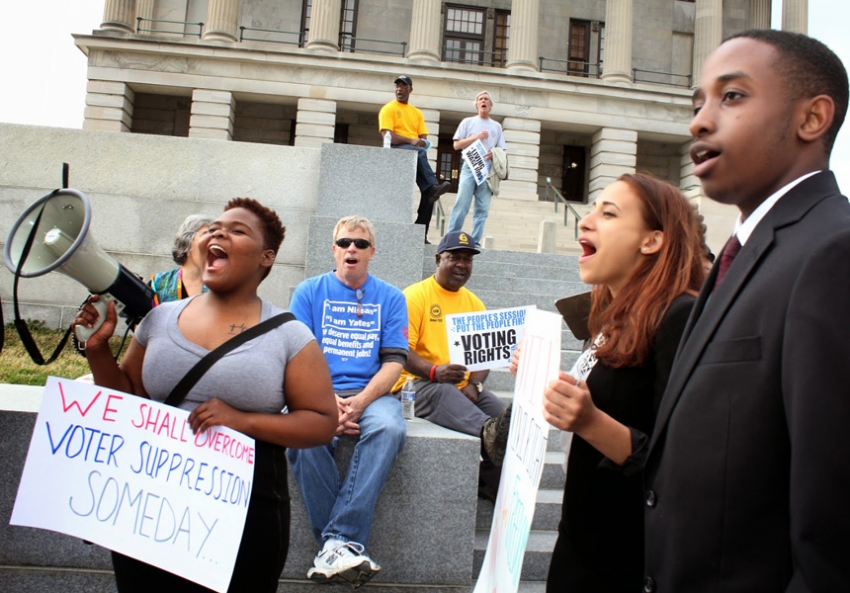 Members of the Nashville Students Organizing Committee join other progressive Tennesseans at the Nashville capitol building as part of the Put the People First coalition. (Joon Powell )

In Tennessee, labor organizers tend to brace themselves for the worst when they see their state’s name in a national headline. And so far, the news this year has been particularly grim. The aftershocks from the United Auto Workers’ historic defeat in Chattanooga are still being covered by major media outlets; just last month, the Department of Labor Statistics revealed that Tennessee leads the nation in minimum-wage jobs.

As long as the GOP is at the helm, with Republicans in the state legislature quashing a $1 raise to the minimum wage for companies that don't provide health insurance and blocking federal funding to expand Tennessee’s Medicaid program, progressives in the region will probably continue to feel disheartened.

A number of pro-labor groups, however, are pooling their resources in order to make the voice of the Left louder in state politics. “It would be nice for people to have some sense that there are sane people in Tennessee,” says Thomas Walker, who organizes with the United Campus Workers (UCW), a higher-education union affiliated with the Communications Workers of America and headquartered in Knoxville.

The UCW is one of 25 pro-labor groups uniting behind the “Put the People First” coalition, which will hold May Day events this week in Memphis, Knoxville, Chattanooga, Johnson City and Cookeville.

The programs planned on May 1—a holiday, also known as International Workers’ Day, meant to celebrate the labor movement—will differ among the five cities. Johnson City will have a march; Chattanooga a “speak-out”; Memphis a “people’s assembly.” But all will certainly include some sort of “food component,” according to Walker. After all, he jokes, “That’s the South!”

Though “Put the People First” officially launched just last month, it has its roots in a broad spectrum of progressive movements throughout the state. As Walker puts it, the campaign is focused on “economic justice, education justice, and democracy.” Specifically, he says, activists are pushing for a living wage for all workers; reinvestment in public education; and an end to attacks on residents’ right to vote, protest and collectively bargain in their workplaces. And they hope that the wide range of issues will inspire individual groups throughout Tennessee to collaborate on future endeavors.

“Given the relative strength of the Right versus the Left in this state,” says Walker, “we need to connect more broadly with our partners. That’s something we’ve always tried to do on a smaller scale, but never with greater state-wide coordination.”

The inaugural action of Put the People First took place on March 11, when hundreds of supporters rallied on the Nashville capitol building steps and delivered a letter to Governor Bill Haslam outlining their “different vision of Tennessee.”

In a speech to the crowd, UCW local president Tom Anderson announced the birth of the coalition: “Our governor, this legislature and their millionaire backers are trying to destroy 150 years of progressive reforms that the working class has won in our state,” he said. “Today we’re launching a movement to ‘Put the People First,’ just like our sisters and brothers did with Moral Mondays in North Carolina.”

These so-called “Moral Mondays”—recurring protests staged by grassroots groups against North Carolina’s increasingly conservative legislature—have inspired other movements elsewhere in the South, most recently in Georgia. For its part, Put the People First intends to emulate Moral Mondays by mobilizing a similarly multiracial, multifaith, multi-issue progressive coalition in a traditionally conservative state. Unlike in Georgia, however, Put the People First is not explicitly adopting the “Moral Monday” moniker.

At the meetings here in Knoxville where we’re planning May Day, we talk about Moral Mondays as an inspiration. I mean, we don’t feel like we’re at a place for a lot of reasons to call ourselves a Moral Monday and then exactly replicate what they’re doing ... But in content I think we are really trying to shoot for that, certainly when we talk about our strategy and what we want to accomplish.

Thus far, the size and stamina of Moral Mondays in North Carolina have been due in part to a unique geographical circumstance. The state’s Republican-controlled legislature is situated in downtown left-leaning Raleigh, where organizers can mobilize thousands of progressives on a regular basis.

Walker doesn’t feel that Tennessee, where coalition members are spread out across a wide state with important regional distinctions, has quite the same dynamics. After all, a North Carolina Moral Monday protest on February 8 of this year brought out a crowd numbering in the ten thousands, a level of attendance that Tennessee actions have yet to attract. In addition, UCW is headquartered in Knoxville, a three-hour drive from the capitol building in Nashville.

But it is still early. “It took North Carolina seven to eight years to build [Moral Mondays],” explains American Friends Service Committee Program Director Tim Franzen in an interview with The Nation magazine.

Even if actions in Tennessee haven’t been able to match North Carolina in frequency or number of participants, the number of organizations represented in Put the People First is still remarkably inclusive. In addition to UCW, the principle organizer, two dozen other groups have united behind the campaign, including the Service Employees International Union Local 205, United Automobile Workers, Workers Interfaith Network, Jobs With Justice, the Tennessee chapter of the NAACP, and Workers’ Dignity/Dignidad Obrera.

Participation of some of the affiliated groups has been limited to endorsement and assistance with publicity. But other groups, such as the Nashville Student Organizing Committee (NSOC), have been more deeply involved in building the coalition—and they’ve expanded their own intersectional advocacy as a result. On April 14, NSOC organized a protest inside the capitol under the banner of Put the People First, calling for stronger labor representation, a repeal of new voter identification requirements, and an expansion of Tennessee’s Medicaid program.

This was not the first time this year that NSOC, which represents students from more than four colleges in Nashville, had protested at the capitol. But while its previous actions focused exclusively on the civil-rights issue of voter suppression, the launch of Put the People First convinced NSOC leaders to broaden the group’s demands to prioritize all workers. Says Justin Jones, a lead organizer from NSOC:

Chattanooga for Workers has also taken a leading role in the Put the People First campaign. The labor advocacy group was formed by a handful of “community volunteers” during the United Automobile Workers’ recent union drive at the Chattanooga Volkswagen plant because they “saw that the workers really needed community support,” says organizer Katie Cowley-Carpenter. The group has since grown to about 100 people and has taken responsibility, along with help from UCW and funding from SEIU, for the Chattanooga May Day event.

Chattanooga for Workers, says Cowley-Carpenter, is also very interested in helping to grow a Left-led movement in Tennessee in the style of Moral Mondays. “Personally, I wish we were calling this coalition Moral Mondays," she says. "And we may eventually do that. I think that we’re still working on building our base before we commit to that, but we’re definitely in that same spirit.”

Additionally, the budding movement includes fast-food workers representing the Show Me 15 campaign, the mid-South incarnation of Fight for 15 pushing for a $15 minimum wage in the region. According to one organizer in the group, who asked not to be named, fast-food workers “have been at the table” since the first meetings of Put the People First. The organizer adds that Show Me 15 will definitely make an appearance at the May Day event in Memphis.

With so many allies showing their support, Walker says, the UCW intends to take a “social justice union” approach to Put the People First’s forthcoming work—meaning that the groups involved will be advocating both on behalf of their own members and on behalf of everyone affected by the austerity politics and anti-worker legislation dominating the state.

“The issues at hand,” he explains, “really affect the lives of millions of people in this state. ... We’re trying to both represent the immediate program and interests of our members, but in a way that is more broadly focused on society at large.”

The Put the People First coalition has more events planned for this summer, but the details haven’t been hashed out. That’s something that will be discussed at the events this week, Walker says—likely over barbecue.

Full disclosure: The UAW and the CWA are website sponsors of In These Times. Sponsors have no role in editorial content.