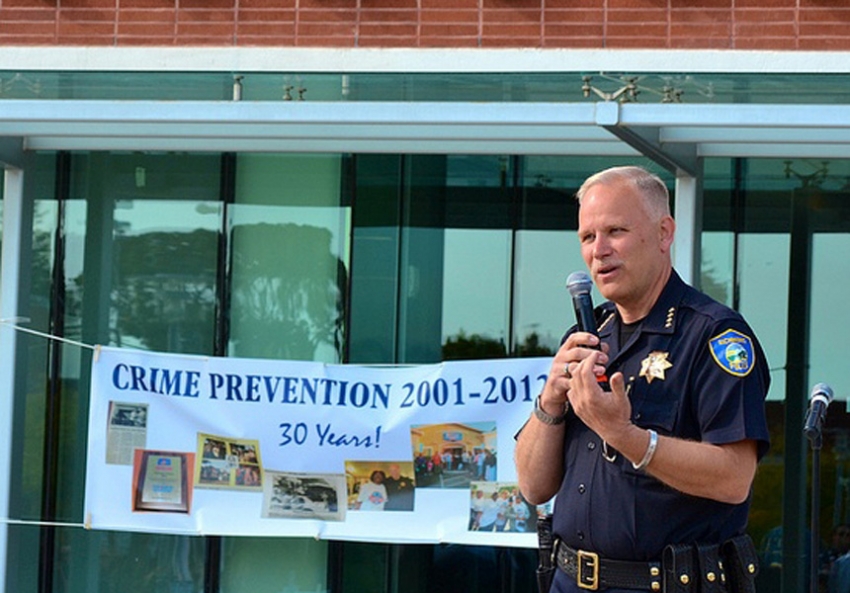 As chief of police in Richmond, California, Chris Magnus wants to employ officers who 'don't feel that it diminishes their authority to show kindness.' (Richmond Police Department)

In Working, Terkel interviewed two Chicago police officers, Vincent Maher and Renault Robinson, both of whom were dissatisfied with their jobs. Maher, a white cop, complained, “We have lost complete contact with the people. They get the assumption that we’re gonna be called to the scene for one purpose—to become violent to make an arrest.” Meanwhile, Robinson, a black cop, was sharply critical of the Chicago Police Department’s emphasis on arresting its way out of crime. Robinson organized the Afro-American Patrolmen’s League “to improve relationships between the black community and the police” because "as policeman, we were the only organized group that could do something about it.”

Forty years later, Chris Magnus, a modern-day veteran of police work, talked to In These Times about how his profession has changed in cities that value “community policing"—which tries to improve public safety through better working relationships between law enforcement personnel and the people they serve—over the methods questioned by Maher and Robinson. As chief of police in Richmond, California for the last eight years, Magnus has won widespread approval for reducing the city’s homicide rate and restoring local confidence in its police department. Magnus began by paraphrasing London police reformer Robert Peel, whose followers argued, two centuries ago, that “the police are the public and the public are the police.”

Historically, the idea of a relationship based more on togetherness and commonality—rather than separation and occupation—was a big part of policing. But then, with the advent of technology, policing mostly became a response to the 911 call machine. And many cities suffered a great deal as a result.

We saw police transition into this role of call-takers, report-writers, and crisis-interveners. Some of those changes moved us away from the idea that officers could actually be people who built relationships in the community, who developed trust, and who were seen as problem solvers.

If you’re really committed to community policing, you have to make structural changes within your organization. Are you going to have community policing officers who are just this small cadre within a department—essentially its public relations wing—or are you going to integrate the larger expectations of community policing into the role of every officer? The latter is what we’ve tried to do here—to say no matter what your assignment, we expect you to, first and foremost, build quality relationships.

In our department, we assign people for longer periods of time to specific geographic areas with the expectation that they get to know and become known by residents. They are in and out of businesses, nonprofits, churches and a wide variety of other community organizations; they come to be seen as a partner in crime reduction. It’s important that officers be in a role where they can interact with the majority of the community, that is not hostile toward them, that sees them as a valued partner; they want a quality relationship, and are not engaged in criminal activity.

This really does work, and it can change the whole dynamic between community residents and police, including in communities of color or others that have historically felt marginalized by police and distrustful of them.

It not only leads to better outcomes in terms of public safety; it also makes for police officers who are a lot more satisfied and productive over the course of their careers, because they’re not just arresting the same people over and over again. They’re actually engaged with residents. They’re seeing their work have an impact and make a difference. I think that makes the job a lot more satisfying even when there’s an enforcement component to it, which, of course, there still has to be.

What we’ve tried to do is promote people who understand the importance of that kind of relationship-building. In our ongoing evaluations of officers, we include measurements of that work, not just of enforcement-related outcomes. We have gotten away entirely from the idea of just putting officers out in street teams to go into high-crime neighborhoods and roust anybody who’s out walking around doing whatever, with the idea that they might have a warrant outstanding or might be holding drugs or something. That only serves to alienate the whole population that lives in those neighborhoods. And 95 percent of them are good people not engaged in crime.

Technology and data do play an important part in contemporary policing. The data that we use allows us to be more sophisticated about who we go after. It’s about focusing on the right people at the right times and right places, which can help officers approach enforcement in a thoughtful, tactical and strategic way—as opposed to a blanket approach that nets everybody up. It’s very frustrating to residents when policing is done like that.

But our data is not used as a weapon to smack people around. It’s not about quotas. It’s not about number of arrests. We use statistics to inform discussions, to give people information they can use, and to discuss problems and to brainstorm solutions. It’s not a “blame and shame” type approach. It’s more about encouraging innovation and creativity, and really celebrating successes as much as pointing out challenges or unmet needs.

One of my overarching goals—and it’s also a challenge—is to have our department represent as best we can the diversity of the community. When you have a department that doesn’t look anything like the community it serves, you’re asking for trouble no matter how dedicated and professional your employees are. I don’t even just mean from a racial, ethnic, or gender standpoint. I mean in terms of life experiences, being connected to neighborhoods, growing up either in Richmond or cities like it—I think those are important factors to consider as well.

Richmond is still a community that has a lot of very dangerous calls for service. We take a gun or two a day off the streets. You need police officers who are very professional and disciplined, and who know how to use the various tools, including weaponry, that they are issued.

But at the same time, we also want people who can shift gears—who can flip a switch and interact, in a very different way, with community members. We want officers who can show empathy with victims of crime, who are not afraid to smile or to get out of the police car and interact in a positive way with people, who can demonstrate emotional intelligence, who are good listeners, who have patience, and who don’t feel that it diminishes their authority to demonstrate kindness.

Happily, there are people who actually have the blend of those skills and abilities. Finding them is not always easy. Many of them do not even necessarily consider police work as something that they would naturally be drawn to. So you have to be a little creative in where you look for those people.