Labor in History: Mobtown and the Stirring of America’s Unions 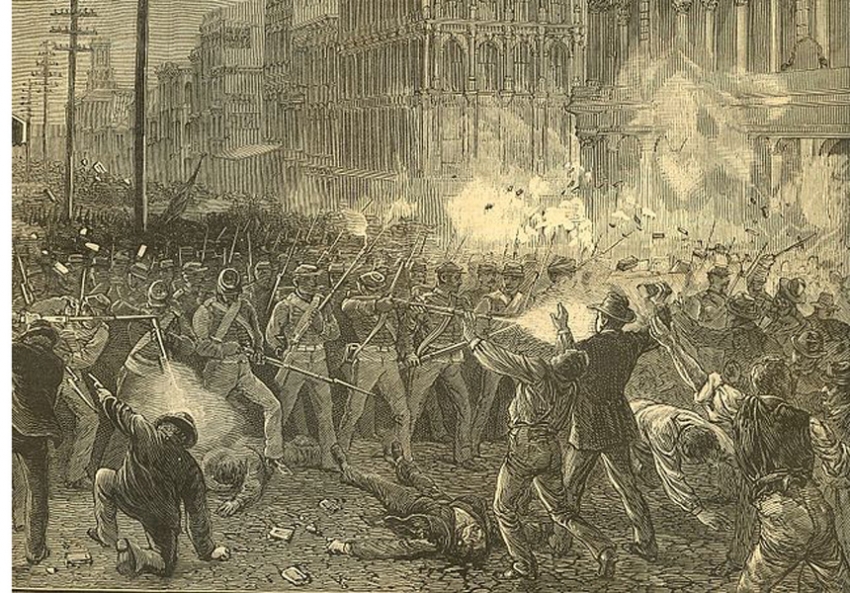 An illustration from an 1877 issue of Harper's Magazine depicts the bloody confrontation between state militia and Great Railroad Strike supporters that took place on the streets of Baltimore. (Public Domain)

Many historians date the first great industrial upheaval of American labor to July 16, 1877, when workers on the Baltimore and Ohio Railroad began refusing to work in protest against a round of wage cuts ordered by the company’s senior managers. Battered by years of economic depression, high unemployment and miserable working conditions, the workers in Baltimore and beyond had finally been pushed to the breaking point.

Even without any broad-based union organization, the B&O strike immediately seized the public imagination. The unrest spread rapidly to other railroads before expanding to include workers at mines and factories in widely scattered locations across the country. At its height, the six-week-long "Great Railroad Strike" involved an estimated 100,000 workers in more than a dozen states, and succeeded in paralyzing much of the nation’s transportation system.

The sudden uprising engendered fear—and more than a little panic—among railroad executives and government officials. Within just a few days, the first great national strike in U.S. history became one of its first great industrial tragedies, as state militia units and federal troops moved to suppress the movement. Soldiers fired on strikers and protesters during epic clashes in Chicago, St. Louis, Pittsburgh, Baltimore and elsewhere. More than 100 people were killed; thousands more were injured. In the end, the strike was crushed, setting a precedent for the violent suppression of labor unrest that would stain American labor history for generations to come.

These dramatic events provide the foundation for an unusual new book that closely examines the 1877 events in Baltimore, where the strike began. The 1877 Railroad Strike in Baltimore offers a sympathetic view of the demonstrators from author Bill Barry, a former union organizer, college instructor and political activist who brings his passion for human rights to the union-printed volume. Barry skillfully weaves together local Baltimore history, the social background of the city’s immigrant Irish workers and the broader themes of an emerging national labor movement in a fascinating narrative of class conflict and urban revolt.

In retrospect, it seems almost inevitable that Baltimore would be the flashpoint for the national strike. The city had already been unofficially dubbed Mobtown, based on anti-corruption riots in 1835 and anti-war protests in 1861. More importantly, Baltimore was the headquarters of the B&O Railroad, with shops and railyards employing thousands of restless low-income workers, many of them first- or second-generation Irish. And thanks to the national depression brought on by the Wall Street Panic of 1873, B&O had already enforced across-the-board wage cuts even before the summer of 1877 began.

Two other events undoubtedly added to the anger of the workers, Barry argues, although he and other historians have found little documentary evidence to suggest a direct link. First, the presidential election of 1876 had recently concluded in a corrupt bargain that saw Democrat Samuel Tilden, who had won the most votes, concede the White House to Republican Rutherford B. Hayes. Baltimore was a Democratic town, and the murky circumstances of Hayes’ victory must have created hard feelings. Second, the strike began less than a month after the infamous “Day of the Rope,” the execution of 10 Irish coal miners accused of leading members of the Mollie Maguires secret society in a campaign of armed resistance to the mine owners of nearby eastern Pennsylvania. The Mollies were linked to early union organizing in the coalfields, so the hangings were seen by some contemporary workers and by later historians, including Barry, as suppression of both unions and the aspirations of the Irish-Americans.

All of this acted as a prelude, then, to July 16, the day B&O workers struck in protest against a 10 percent wage cut. It was the second wage cut within a year; at first, the workers only asked that the new reduction be rescinded. The protests rapidly grew in scale, however. On the very first day, strikers successfully shut down the roundhouse complex at Martinsburg, West Virginia; they soon stalled rail operations all along the rest of the B&O network.

From the beginning, the strike was remarkable in its strong popular support from other non-rail workers and city residents. Sympathy for the workers was even evident among the militia members called out to protect rail property from angry protesters. The governor of West Virginia made an early call for federal troops, for example, when it became clear his state militia would not use force against the strike supporters at Martinsburg, many of whom included local allies who blocked the tracks to prevent scabs from running trains.

Meanwhile, in nearby Cumberland, Maryland, B&O President John Garrett made a call of his own to elected officials. Concerned for railroad property, he urged the state's governor to send Maryland militia units to the town; Gov. John Caroll was quick to comply.

On the evening of July 20, troops from the Maryland 5th and 6th Regiments began a march across Baltimore from its Read Street armory to B&O’s Camden Station, where they intended to board trains to Cumberland. The decision was unwise, as the downtown streets were full of angry strikers, supporters and bystanders determined to stop the trip. According to Barry's account, an estimated 2,000 men massed to block the troops, outnumbering the militiamen by about 10 to 1; the workers attacked with paving bricks and sporadic pistol fire. Determined to carry out their orders, the soldiers pressed forward against the enraged crowd. The street battle became so intense that the militiamen began firing their rifles into the crowd, ultimately forcing their way to Camden Station. Barry writes that when the streets cleared, there were 10 dead, including a 14-year-old boy. It later emerged that none of the casualties were B&O strikers; rather, Barry reports that they were local workers from other industries joining the protests in solidarity with the Great Strike.

The deaths ignited the workers in Baltimore and in other cities. Crowds of workers swarmed Camden Station—newspaper accounts from the time estimate the throngs as large as 15,000—to prevent the militia from moving. The governor of Maryland appealed to President Hayes for federal troops to restore order.

Similar episodes soon erupted elsewhere: In Chicago, 30 men were killed in the Battle of the Viaduct; in Pittsburgh, enraged workers torched trains and railroad buildings; in St. Louis, a general strike effectively shut down the city. Hayes dispatched federal troops to dozens of cities around the country to bring the strike under control. Ultimately, this federal intervention was successful: The strike gradually lost momentum before sputtering out completely.

Though the strike itself may have failed to achieve the B&O employees’ original goal of wage restoration, it undoubtedly stimulated the growth of unions, particularly among rail workers. The Brotherhood of Locomotive Engineers had been founded in 1863; while it did not yet have a contract with B&O in 1877, it had nonetheless begun to take root throughout the industry. The top officials of the engineers’ union actually opposed the strike, but many individual members nevertheless refused to work.

Meanwhile, one emerging local leader of the fledgling Trainmen’s Union, Robert Ammon, was especially effective in organizing job actions at the Pennsylvania Railroad during the Great Strike. Barry writes that he would later testify in a state inquiry into the events that some workers were united in secret societies (not unlike the Mollie Maguires), and that the rail strikes were far better organized than appeared on the surface.

Barry’s book is full of additional colorful details of the strike action in Baltimore: It offers as much for the sheer joy of reading as it does for the more serious historical material. There exists little primary-source documentation of the strike on the workers’ side, though B&O and other rail companies left extensive one-sided records of their own actions, so Barry relies heavily on contemporary newspaper accounts. However, this has the benefit of providing lively material from an age when multiple publications competed vigorously in the popular press. The book is also illustrated with images from those publications and modern photos of important sites, both of which add more flavor to the rich narrative stew.

In addition, Barry discusses various Baltimore locations that history enthusiasts can visit today, such as the relatively new Irish Railroad Workers Museum or the better-known B&O Railroad Museum. Barry himself added to this list with his recent lobbying to add a Great Railroad Strike historical marker at Camden Station, now part of the Camden Yards baseball stadium complex. The marker is now visible to most baseball fans visiting Camden Yards, and it’s Barry’s hope the marker—as well as books like his own—will be another way to keep the memory of the strike alive.

The 1877 Railroad Strike in Baltimore is available for sale; contact Bill Barry at billbarry21214@gmail.com.