Workers Force Indie Bookstore To Live Up to Its Values 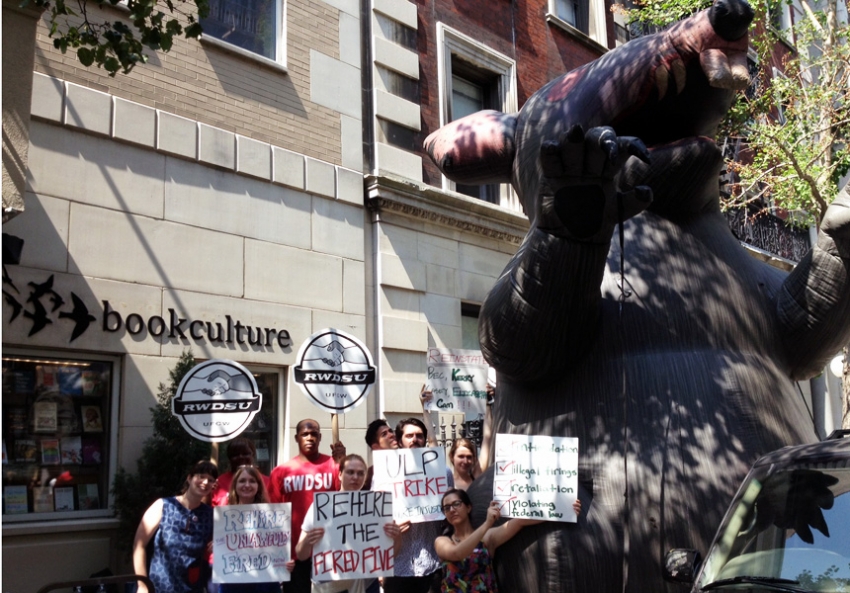 'Scabby the Rat' joins Book Culture employees and allies protesting the chain's treatment of workers during a week-long action. (Courtesy of Peter Montalbano)

A few blocks away from Columbia University, independent bookstore chain Book Culture’s two Morningside Heights locations are often packed with young patrons poring over Feuerbach critical readers or Camus postcards. So many of the company’s progressive customers were dismayed when, on June 27, they received a mass email from Book Culture owner Chris Doeblin informing them that several store managers had been fired for voting to unionize, along with one other worker accused of a separate infraction.

“It became clear that several of the store’s supervisors were not willing to continue to perform the role of supervisors within the new environment of having the unionized workforce,” Doeblin wrote. “We respect them for their candor, but they could not continue as employees when they were unwilling to perform their job’s most essential functions.”

In response to the five firings, the Retail, Wholesale, and Department Store Union, the workers’ prospective union, filed an Unfair Labor Practice complaint with the National Labor Relations Board. RWDSU members also picketed outside both stores every day for a week, blowing up inflatable rats and encouraging onlookers to boycott the establishments. On July 2, nearly every worker walked out on a one-day strike.

The next day, Book Culture hired back all four fired supervisory workers and negotiated a compensation package for the fifth, officially retracting its claim that she had been eavesdropping on management conversations.

Though employees were thrilled by the turn of events, the incident raises troubling questions for Book Culture customers and staff alike—namely, whether the store’s left-wing environment obscures a much more conservatively run workplace.

In December 2013, five workers from Book Culture approached RWDSU organizers, telling them that they wanted to unionize. After months of clandestine meetings and house visits, the union filed for an NLRB election on May 13. On June 24, both Book Culture locations overwhelmingly decided to join RWDSU, with only two employees voting against it.

Later that evening, Doeblin sent an email to Kerry Henderson, one of the store managers, informing her that she had been fired.

“Your voting for the union after we have given the clear indication to you that our interests were in not having a union are at odds with this company,” Doeblin wrote. “You are fired affective [sic] immediately.”

In his June 27 mass email, Doeblin claimed that because four of the five workers were classified as managers, they could not vote in the union election. The managers have since publicly argued that they did not have the power to hire, fire, or use independent judgment at the workplace; therefore, their classification did not have legal merit. Yet, rather than contesting their votes with the NLRB, Doeblin chose to fire them.

This is not the first time Doeblin’s actions have seemed to be at odds with his store’s radical ethos. In 2009, while Book Culture employees were still part of Workers United Union Local 169, workers accused him of union-busting: refusing to follow contractual agreements around holiday pay and even firing workers just before they became eligible to join the union.

Doeblin says that he sees no conflict of interest between his store’s identity and his attitude toward organizing. “A union is not an ideal. Justice and fairness are ideals. … Retail bookselling is a tough business, and only tough operators will survive. Fair, just and tough can all coexist,” he writes in an email to In These Times.

He continues, “A union is a cost. It is not good for our business. I don't think anyone operating an organization hopes to have a third party come in and affect the decision-making progress. … To answer this in a different way, try this: Find a manager, president or CEO of any company, large or small, who wants to have a union come into their company.”

Shamus Khan, a sociology professor at Columbia, argues that such disconnects between theory and action are all too common in ostensibly leftist circles. About the firings, he says, “I wasn’t that surprised, in part because I think these small businesses think of themselves as ‘families,’” he says. “And there is emotional baggage that comes with that. I also think that small progressive businesses demand that their employees buy into and make sacrifices to ‘the cause.’”

And Doeblin’s tactics proved effective. After two years trying to hammer out a new agreement at the bargaining table, Workers United disclaimed interest in its Book Culture local in 2012, leaving the staff with no contract and no union.

According to Henderson, Doeblin took advantage of the confusion.

“Once the union left I got concerned,” says Henderson, who has worked at Book Culture for two and a half years. “Chris was in control of a lot of things that the union used to take care of, such as job classification.”

In the months that followed, Henderson says, Doeblin promoted nearly half of Book Culture’s total workforce to managerial positions without giving them any supervisory privileges or substantial pay increases.

“He made it seem like he was being generous for putting [managers] on salary, but it was pretty much the same amount,” Henderson says. As a manager, she says her pay amounted to around $1.50 more an hour when she worked 40 hours a week. Often, however, she put in longer shifts than that, especially during busier seasons.

RWDSU organizer Peter Montalbano declined to comment as to whether Doeblin wielded these questionable classifications to weaken the possibility for a successful union election.

“Our position is that they were workers the whole time and were happy he’s calling them workers now,” Montalbano says. However, he does note that the high ratio of managers to non-supervisory staff “speaks for itself.” He also reports that RWDSU plans to negotiate with the company over whether the other managers should be included in the bargaining unit.

“Part of the reason management gave in so easily, I think, is because we had so much support from the community,” says Maxine Anderson, one of the striking employees. “Columbia professors and students, as well as our lefty neighborhood regulars, were totally supportive of us—they wrote emails, shared our side of the story on social media, came by to say ‘Hi’ when we were on strike, and, most importantly, refused to shop at the store until our co-workers were rehired.”

“Before passersby even noticed our picket, people would point and say, ‘That’s the bookstore where they fired those workers for unionizing,’” Montalbano adds. “I’ve never seen that kind of support in New York City, ever. Overwhelming.”

Now that the managers have been re-hired, Book Culture’s employees hope that support will continue as they enter contract negotiations. After all, their bread-and-butter issues—low starting pay, the lack of a clear pay scale or promotional ladder, and inconsistent raises—have not yet been resolved.

Nonetheless, workers sense a changing power balance in the shop. “Management actually was really taken aback and wasn't sure how to treat us,” says Anderson. “There was a real atmosphere of solidarity, knowing that we all had each others' backs and would keep supporting each other in the future.”

And employees are confident in their commitment to the cause. If it’s necessary, Anderson says, “I’m always down to strike again.”

George Joseph is a reporter focusing on education and labor issues in New York City. Follow him on Twitter at @georgejoseph94.