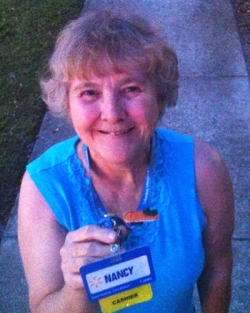 Nancy Reynolds, 67, says her unpredictable schedule makes it hard for her to manage her diabetes. (Photo courtesy OUR Walmart)

According to the Bureau of Labor Statistics, nearly half of part-time workers aged 26 to 32 receive their schedules with less than a week’s notice—and their hours often vary dramatically. Such instability can be exhausting for employees, who must frequently try to fit childcare, school medical appointments or second jobs around uncertain routines and inconsistent paychecks. Still, many companies seem disinclined to make changes on their own, particularly in lower-paying industries: A July 2014 study from the University of Chicago found that 90 percent of fast-food employees reported work-hour fluctuations in the past month.

Lawmakers, however, are finally taking notice. Last week, Representatives George Miller (D-Calif.) and Rosa DeLauro (D-Conn.) introduced the Schedules That Work Act, which seeks to encourage employers to give employees steadier hours by imposing minor penalties for unpredictable schedules. Under the bill, employers would have to pay staff for an extra hour of work if they provide them with less than 24 hours’ notice of a shift. The bill also guarantees four hours’ pay minimum on any day an employee is scheduled to work for at least four hours, even if they are sent home early. Although Reps. Miller and DeLauro expect opposition from business leaders and Congressional Republicans, they hope the bill will raise awareness of the plight of part-time workers. Senators Elizabeth Warren (D-Mass.) and Tom Harkin (D-Iowa) have sponsored Senate versions of the same bill.

Nancy Reynolds, 67, knows firsthand how helpful such a bill could be. Reynolds has worked full-time in manufacturing, security and as a truck-stop fuel clerk, but she tells In These Times her part-time position as a Walmart cashier in Florida is one of the most demanding she’s ever held. Despite only scheduling her for 22 hours a week, Reynolds says Walmart requires her to be available at all hours for four days a week, and often changes her timetable less than a day in advance without giving her any notice. Reynolds says her constantly shifting routine leaves her little opportunity for a life outside Walmart, even disrupting her ability to treat her diabetes.

In These Times got in touch with Reynolds to discuss her job at Walmart, and why it’s so important for workers to have hours they can count on. This interview has been abridged and edited.

I set a schedule when I retired I could only work only so many hours. I could only make so much money [and still receive retirement benefits], so I set a four-day week for myself where I would have some breaks in there. My off-days are Saturdays, Tuesdays and Wednesdays of every week. I had to get them to okay it, and thank the good Lord they did. I also set my available hours to work as 9 a.m. to 9 p.m. on Sunday, Monday and Thursday, and on Friday from 9 a.m. to 7 p.m. They gave me these hours; I wanted Sunday off, so I could go to church, but they wouldn’t give me a Sunday, so I took Saturday instead.

And that’s actually a good schedule for me! Sometimes they have more work until 9 at night and come back at 9 the next morning. You don’t get enough rest. As long as they give you eight hours in between they don’t care. Sometimes that’s all they give you.

How far in advance do you get your schedule?

I put my schedule on my refrigerator so I know in advance when I’m working, because otherwise I would get confused. We’re supposed to have them three weeks in advance; in other words, three weeks of schedules at a time. But they have changed my schedule at the very last minute, especially over the holidays. And it’s very hard to get out of an extra shift. Most of the time they don’t allow it. One time they had me scheduled the Sunday before Christmas to go in at 10:30 in the morning three weeks in advance. I was off on Saturday and I just happened to go in and double-check my schedule, and they had changed it to going in at noon. If I had gone in at 10:30, I wouldn’t have been able to have started. That’s totally ridiculous. Sometimes they’ll change the schedule from having you go in at 10:30 to having you come in at 9:00, and if you don’t check it every day you’ll be late! Then they charge you with that.

You are expected to check your schedule every day. During the holidays, I will check it at night and again in the morning, just to be on the safe side. The schedule is online. If you have a computer at your home, you can go to WalmartOne and pull up your schedule—if the site is up. If the site is down, you’re out of luck, which happens a lot.

What happens if you need to take off work?

If you have an emergency and need to take off work, they have a toll-free number for associates that you call, and you choose what the problem is. Then you’re charged with an absence, and you’re only allowed three absences for six months. On the fourth one you get [disciplined].

Are you able to make sure you get enough hours each week? Are you guaranteed any minimum number of hours?

Ever since I have been with the organization, they left with my full amount of hours all, but one week every five to six weeks, they’ll cut me one hour. In other words, my maximum hours are 22 per week, and once every five to six weeks they’ll cut me to 21 hours. But before I joined [OUR Walmart]—before I became a member and became very active in it—they did cut me a couple of times down to 16 hours. A lot of the ladies I work with, that’s what they’re getting a lot of the time.

They seem to respect me a little more. I’m the only one that’s really outspoken in my store. I have been on strike twice. They know that I’m outspoken, so they kind of tread lightly on me right now, but I know that they’re watching me closely.

How does having an unpredictable schedule affect your life outside of work? Does it make it difficult to schedule doctor’s appointments or get together with friends and family?

I have to schedule my doctor’s appointments on my days off. As for scheduling an evening out—I am single—I haven’t gone on a date in about two years, mainly because my schedule is so erratic that I stay worn out and trying to catch up on everything. It doesn’t leave any time to really plan to go out with someone. My brother lives down here too. And we have trouble getting together as well, because of my schedule and being so tired all the time. Because my hours are up and down, I can’t get my body straight. It really puts a crimp in a social life at all.

Before I moved to Florida, I was working as a fuel clerk at a truck stop. Before that I worked at AT&T, and for a short while I was a security guard at a hospital. I’ve had a lot of strange jobs. I have actually worked in factories six days a week and had more time to go out and enjoy life, because I knew what my schedule was going to be every day. Even when I worked as a fuel clerk, we had shifts, so we knew what our schedule was going to be. There were times when we had to fill in for people who were sick, but that was our choice, it didn’t count against us if we couldn’t do it and had plans. With Walmart, your life is Walmart. That’s it. You don’t really have a chance for a life, because when you get off you’re too tired to do anything.

How does affect your feelings about Walmart? Do you feel like Walmart values your time and work?

They don’t value us at all. We’re there solely for them. When I worked for AT&T, it was a union shop, and we had rights. Walmart just takes all the rights totally. You have to watch what you say. You can’t speak your mind. They don’t really want you associating with the other associates. They don’t like you talking to them. They try to keep you totally by yourself and alienate everybody. It is not a family like they try to say we are. I have worked a lot of jobs, and this is one of the few jobs I have to give myself pep talks to get myself to work every day.

How would the bill Rep. Miller has introduced in Congress to guarantee steady schedules for part-time workers help you?

It would make a very big difference. The other thing that I know would help is that they’re trying to make it so people can work two different jobs. The bill would give me a set schedule, and I could work my diabetes out.

How can people help make a difference? What can people do to get involved?

Anyone can make a phone call to Congress—emails, phone calls, letters. And letters to Walmart. There’s an 800 number to corporate where customers can voice their opinion and put in whatever their ideas would be. The bottom line is, the employees are the ones who are in there with the public, and if the employees aren’t happy, the public’s not going to be happy. I would never say don’t shop somewhere because then my job would be gone, but consumers can still put pressure on Walmart and other businesses by speaking out. Then maybe they’ll start paying attention.