A ‘Bill of Rights’ for San Francisco’s Retail Workers 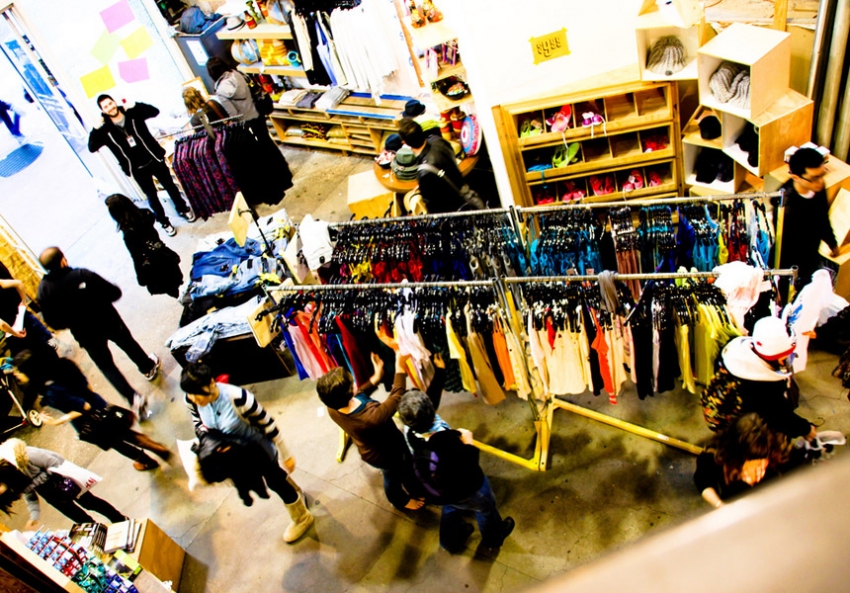 A proposed ordinance in San Francisco could make it easier for retail workers to attain stable employment in one of the country's most expensive regions. (Nico Crisafulli / Flickr / Creative Commons)

In April 2011, Jessy Lancaster, then 28, was hired as a part-time cashier for the discount clothing store Ross Dress for Less in San Francisco. At the time, the city’s hourly minimum wage was $9.92 an hour; in one of the most expensive areas of the country, Lancaster wanted to work as many hours as possible. Unfortunately, even making herself available six days out of the week—including Saturday and Sunday—wasn’t enough.

"It didn't make a difference," Lancaster says. Most weeks, she would be scheduled for 12 to 20 hours, despite telling a manager that she was willing and able to do more. “It was piecemeal,” she says. “I would usually work four to six hour shifts. Four hours here. Four hours there.”

As someone who wanted to work 40 hours a week but was unable to do so, Lancaster was what San Francisco Supervisor Eric Mar calls an “involuntarily part-time worker.” The lack of sufficient hours doesn't just force such individuals to struggle to pay their bills; the unpredictability of work schedules makes it difficult to plan the rest of one’s life. Lancaster says she never knew if she was going to be working first thing in the morning or late at night. For workers with family caretaking responsibilities or health concerns, this can make scheduling childcare or medical appointments almost impossible. It also creates difficulties for people trying to work more than one job or attend classes.

On Tuesday, July 29, Mar introduced the first half of a “Retail Workers Bill of Rights," which aims to help Lancaster and people like her attain stable employment, to the San Francisco Board of Supervisors. Supervisor David Chiu will introduce the second half of the bill in September. The two bills only apply to what San Francisco defines as "formula retail": stores, restaurants, hotels and banks with 11 or more outlets nationwide. According to Jobs with Justice San Francisco, a coalition of labor unions and community organizations that helped craft the bills, there are about 1,250 such businesses in San Francisco, employing about 100,000 people. (San Francisco is also currently considering modifications to the definition of formula retail, which would expand the bills’ scope to include gyms, insurance companies and check-cashing outlets.)

Many of these workers, like Lancaster, suffer the consequences when employers attempt to prioritize cutting costs over improving staff welfare. According to a report in the New York Times, some retailers now use sophisticated scheduling technology to target the precise number of workers required at each hour of the day. It’s more cost-efficient, then, to bring different workers in for short shifts than to keep a full-time employee on the clock during slow times.

According to Lancaster, this was the method Ross management appeared to favor. “I was always pissed off that they would hire more part-time workers, but not give us more hours,” she says. “I didn’t understand why they would do that. They would do interviews in the break room. You would walk in and see them doing interviews and think, ‘Why are you hiring more people?’”

To combat practices like these, the Mar bill would require formula retail companies—which include stores such as Target, Lowe’s, The Gap, McDonald’s and Starbucks—to offer more hours of work to current employees before hiring additional workers. The bill also provides job security for workers in the event of a change in franchisee or corporate ownership by mandating that employees be kept on for at least a 90-day trial period afterward.

Meanwhile, the Chiu bill will aim to curtail what Jobs with Justice San Francisco calls “abusive scheduling practices” by requiring employers to pay a to-be-determined premium amount to workers who are required to be on-call or have their shifts cancelled with fewer than 24 hours’ notice. The bill will also prohibit discrimination against part-time employees with regard to pay scale, access to time off and promotion opportunities. In other words, they’ll accrue paid time off at the same rate as full-time colleagues, and if they perform similar labor, they’ll make comparable wages.

Mar says that together, these “groundbreaking policies” provide an opportunity for “San Francisco to once again lead the way in creating innovative policy models to support working families.”

With its goals of promoting steady working conditions, the proposed ordinance is similar to the Schedules That Work Act introduced to Congress by Representatives George Miller (D-Calif.) and Rosa DeLauro (D-Conn.), and Senators Tom Harkin (D-Iowa) and Elizabeth Warren (D-Mass.) Like the ordinance in San Francisco, the bill would require guaranteed pay for cancelled, shortened, or on-call shifts for employees; it would also compensate them for “split shifts." The act is broader in scope than San Francisco’s, though it does not require employers to offer more hours to part-time workers before hiring additional ones: Beyond “formula retail” stores, its aforementioned protections would extend to everyone in the retail, janitorial, and food service sectors.

Moreover, analysts report that the legislation would grant all workers, regardless of profession, the right to request a “flexible, predictable, or stable” schedule without fear of retaliation—a right already codified by law in San Francisco.

Unfortunately, in today’s political climate, the Schedules that Work Act is unlikely to pass the Republican House or achieve a filibuster-proof majority in the Senate. But backers of San Francisco’s Retail Workers Bill of Rights are optimistic about its chances of becoming law, pointing to the city’s track record of enacting pro-worker policies ahead of the rest of the country.

After all, San Francisco’s labor laws already include a minimum wage pegged to inflation, mandatory paid sick leave, the Health Care Security Ordinance, which brought the city close to universal health coverage, and the Family Friendly Workplace Ordinance, which is similar to the “right to request” provision of the Miller bill. Despite these progressive policies, however, a recent study by the Brookings Institute found that San Francisco is still the city with the fastest-growing income gap between the richest and poorest residents in the country—so ordinances enabling workers in low-wage sectors to earn more money could help fight such an imbalance. Chiu, who is co-sponsoring the bill with Mar, said at a press conference Tuesday that passage of this bill will again show that San Francisco is “a national leader in how we treat workers.”

In a press conference, Supervisor John Avalos, another supporter of the bill, compared the current plight of retail employees trapped in the “race-to-the-bottom Walmart model” to those of workers 100 years ago, before the rise of 20th-century unionization and workplace protection laws. In kind, he likened the Retail Workers Bill of Rights to the Progressive Era reforms that reined in abuses by giant monopolies, established the eight-hour workday, and banned child labor, among other reforms.

The ordinance will be voted on by Board of Supervisors in the fall. It requires a majority of six out of 11 votes to pass the Board with the support of the mayor, or eight votes to override a mayoral veto. San Francisco Mayor Ed Lee has not yet weighed in on the proposal. Avalos is confident, however, that the proponents of the bill will prevail.

“We will make this pass,” he promised.