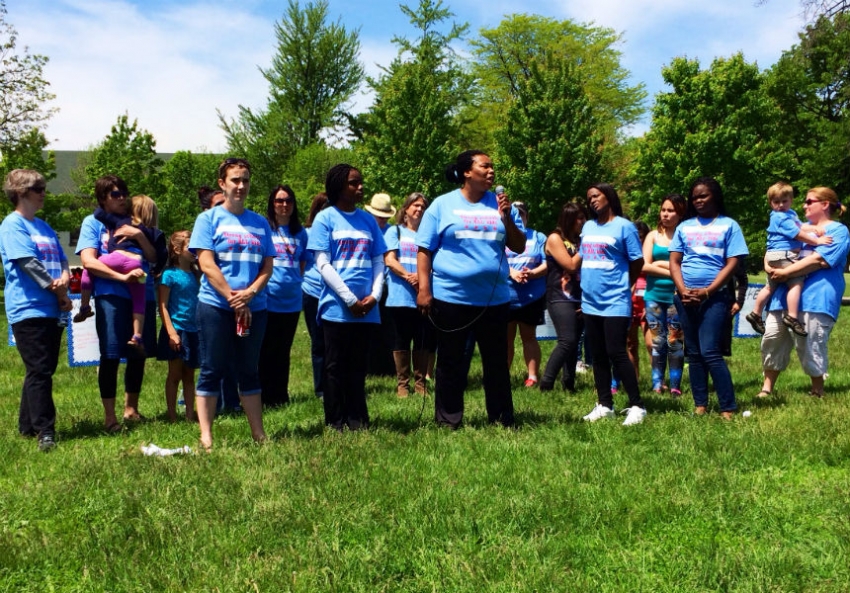 Members of BAM gather at the Neighborhood Schools Picnic in May 2014.   (Crystal Stella Becerril)

Last August, as the summer break came to an end, Chicago parent Rousemary Vega was devastated. Three months prior, the city had voted to close a record-high 50 public schools, including Lafayette Elementary in Humboldt Park, where her children had been students. Upon receiving the letter from Chicago Public Schools that their school would be shuttered at the end of the 2012-2013 school year, the Vega family began organizing to overturn that decision. However, despite their efforts—including their occupation of Lafayette on June 19, 2013—and the community’s pleas, the Board moved forward with the closure, displacing 570 students in the process.

Vega says she’d never before contemplated the possibility that her kids’ education could be put on the line.

"I was just a working mom with four kids, not worried about their school closing,” she explains to In These Times as she wipes away tears. “I just never thought that could be possible because I thought education was sacred. ... So for them to close schools, to close our doors—it was unbelievable to me.”

Shocked as she was, Vega refused to be defeated by Lafayette’s shuttering. At the start of the 2013-2014 school year, she began reaching out to other mothers who were ready and willing to fight back against the Board of Education’s decisions. Within a few months of Lafayette's closure, the advocacy group BAM—or “Bad Ass Moms” was formed.

Though there are a number of parent organizations fighting for educational justice in the city—including Parents 4 Teachers (P4T) and More Than a Score (MTS), whose membership overlaps with BAM’s—BAM concentrates on a breadth of issues rather than advocacy around any one particular topic, such as layoffs (P4T) or over-testing (MTS).

United behind the idea that all schools should be great schools, not just the ones their kids attend or the ones the Board of Education deems worthy of saving, BAM activists say they want to amplify the voices of working-class families whose schools are being defunded, over-tested and disproportionately closed by the city's so-called education reformers.

"I would say … the school-closing struggle was the spark that got us together," says BAM member Julie Fain, managing editor at progressive publishing house Haymarket Books, whose children attend Pritzker Elementary in Wicker Park. "When CPS closed 50 schools, the unintended consequence was that they mobilized a lot of angry parents in the process. Many of us got to know each other through that and agreed on a basic level that we needed more justice.”

Though the schools targeted for closure have tended to be in poorer neighborhoods, BAM leaders say their membership encompasses families from across the city.

"BAM is a group of mothers from across the city of Chicago from different races and different economic backgrounds,” explains BAM member Sherise McDaniel. “We've all come together to fight for the same cause: public education.”

McDaniel’s children attend George Manierre Elementary in Chicago’s Old Town neighborhood, a school which was also slated for closure in mid-2013. However, strong parental and community opposition, which McDaniel helped to organize, eventually forced CPS to back down: Manierre was taken off the list of schools to be shuttered. Now McDaniel and BAM hope to use similar direct-action tactics to defend other schools that may be targeted for closure or “turnarounds”—which refers to the practice of restructuring a school's administration, often by firing staff members and reopening the school under new leadership.

Bad-Ass Moms has already begun employing those same strategies to help inform local parents about the harm that education privatization does to students and communities. Last November, the group organized a Neighborhood Schools Fair at Roberto Clemente High School in Humboldt Park. According to BAM, the fair's purpose was to showcase the programs and people that make neighborhood public schools so tremendously valuable and worth investing in. It also provided resources for families who wanted to take a more active role in their schools and communities.

Then, in January of this year, the group braved the Polar Vortex's icy weather to distribute leaflets outside of Soldier Field, where CPS was hosting its annual New Schools Expo, which most featured charter schools. BAM leaders say that the pro-charter propaganda put out by CPS and charter school networks deliberately misinforms parents about the options available to them by offering charter schools as the only alternative to underfunded neighborhood schools.

"I would say parents are misinformed about charter schools," explains Fain. "Often they don't know about harsh discipline policies or high suspension rates, or how limited the academic offerings can be ... Charters use glossy marketing materials to make them look new and attractive, but really they don't do any better on CPS's own measures of standardized tests."

To help combat this reported confusion—and to point out that opening more charter schools shouldn't be Chicago’s only option for improving public education—BAM’s leaflet offered parents a number of questions that they could ask charter school representatives. Questions like "What percentage of teachers at your school are certified? What support do you offer for English language learners?" and "Is there a school nurse? A guidance counselor? A social worker?" appeared on the leaflet to help guide parents through the school-selection process.

BAM has also targeted the Board of Education directly by speaking out at public hearings and meetings about school closings and turnarounds.

In addition to rallying parents around the city, BAM has turned to instructors for guidance and support. The Chicago Teachers Union, which has also been quick to speak up against the city’s swathe of school closures in recent years, has both stood in solidarity with the group during their actions.

"We see the relationship between BAM and the CTU as an important and crucial one in the fight to defend and save public education," explains Vega. "The bond created between parents and teachers is evolving and will become our shield against harmful education policies."

In May, BAM bid farewell to the 2013-2014 school year by organizing a neighborhood schools picnic to commemorate the 50 schools shuttered the previous June and celebrate those that remain open. Though no specific events are yet planned for the fall, the group intends to continue taking direct action as Chicago’s war on accessible education continues.

Many have already noted the transformative legacy of the teachers' strike in September 2012 and its impact on teachers' unions across the country, but that legacy should not be measured only in terms of its impact on the labor movement. It has also inspired parents like Rousemary Vega, Sherise McDaniel, and Julie Fain to unite on a personal level for the sake of their families and their city.

"Ultimately," says Fain, "our goal is to work with parents to create networks and connections that can be used to oppose harmful policies in the city's schools. We want parents to know they aren't alone, that together we are stronger."

Crystal Stella Becerril is a Chicago-based Xicana activist, writer, and photographer. She is currently a contributing writer for Socialist Worker Newspaper, Red Wedge Magazine, and Warscapes Magazine where she writes about education justice, race, feminism, and culture.