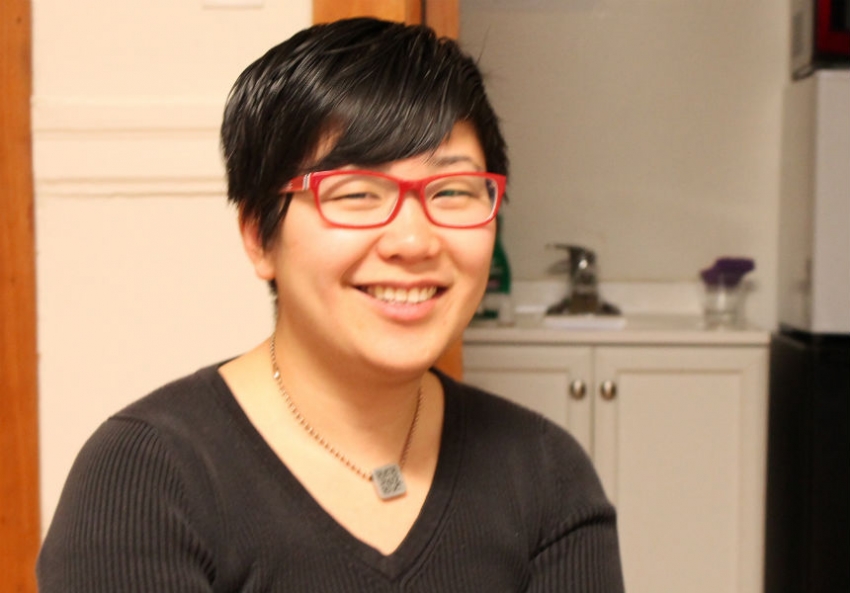 Sunah Suh, 29, says though there’s been work to address the lack of women web engineers, gender disparity is still a pervasive problem in the field. (Matthew Blake)

For three years in the early 1970s, journalist Studs Terkel gathered stories from a variety of American workers. He then compiled them into Working, an oral-history collection that went on to become a classic. Four decades after its publication, Working is more relevant than ever. Terkel, who regularly contributed to In These Times, once wrote, “I know the good fight—the fight for democracy, for civil rights, for the rights of workers—has a future, for these values will live on in the pages of In These Times.” In honor of that sentiment and of Working's 40th anniversary, ITT writers have invited a broad range of American workers to describe what they do, in their own words. More "Working at 40" stories can be found here.

In Working, Terkel spoke with Mike Lefevre, a steel mill employee who spoke about how he felt it was hard for Americans to take pride in the things they had built, because they could no longer see their own mark in the construction. Lefevre remarked, “I would like to see on one side of [a building] a foot-wide strip from top to bottom with the name of every bricklayer, the name of every electrician, with all the names.”

Today, just as many Americans move through cities without thinking much about the people who physically constructed them, we often surf the web without dwelling on those who create its infrastructure. For the last year and a half, 29-year-old Sunah Suh has worked as a Chicago-based web engineer for a Brooklyn-headquartered website connecting buyers and sellers of handmade goods.

Etsy.com is a marketplace for handmade and vintage goods and craft supplies. Everything that you can buy on the site is either handmade by a real person, or is vintage, meaning it’s older than 20 years old.

So you can sign up pretty easily to be a seller or to put your own stuff up there. We have a couple of “missions” that we like to talk about, like bringing heart back to commerce and just making more meaningful connections between buyers and sellers. That’s one of the things that attracted me to Etsy when I was interviewing.

I generally work from home. But I live a couple of blocks away from my office.

I don’t have any other colleagues in this office. We just hired two people in Chicago, but they haven’t started yet. Before that, I was the sole employee in Chicago.

Is any of your work location-specific?

Once in a while. We have a lot of sellers and so I’ll try to meet up with them and such. Otherwise my job is on the software side; I sit at home.

Etsy has been around for seven years. The company employs around 500 people; about 200 of us are engineers. My whole team is remote. We’re kind of experimenting within the company to see how this will work. We have someone in Minnesota and Seattle, and my manager is in Boulder. So we’re fairly dispersed.

Is the job stressful?

In the spectrum of jobs, I would say no. No one is ever going to die if I take down the site.

I’m sometimes working on existing code—updating code that other people have written. Other times I’m working to create new features for the site.

What is coding? Let’s say you’re telling fifth-graders what coding is.

It’s making the computer do what you want it to do. Fifth-graders now all have “apps” on their phones. They love their phones. So I would say that people have to make those apps, and making those apps involves programming, which is telling the computer what to do by using a special type of language. I wrote in a programming language all day today.

Because of me, people on the site can do things that they couldn’t do before, I guess. For example, my team and I created a way to target messages to certain customers in a data-driven way, so that the site’s content quickly responds to any changing demographics among Etsy customers.

How much longer do you think you’ll do your job?

I assume I’ll be doing this for the rest of my life. There’s a well-known age bias in software engineering, but it’s a very young field so maybe it will get better as I get older.

I read my first programming book when I was 8. I started making websites in middle school. I started creating and writing what we would call “apps” now when I was in high school. So it was a thing that I had done for a long time, and I knew that there was a good career in it.

Web engineering has a reputation as a male-dominated field. Is that your experience?

Yes! My undergrad major, computer engineering, had nine men to every one woman. It’s a field in which, since the ‘80s, the number of females has actually been going down.

It’s been termed as a pipeline problem, where girls are discouraged from pursuing careers in STEM [Science, Technology, Engineering and Math] fields in general. Becoming a computer programmer is increasingly associated with being male.

I don’t how much of this happens overtly. But you don’t see many models of women, both in the media and in tech workplaces, whom we should uphold as shining examples of computer programmers.

Are there professions that the programming world could follow in terms of women increasing their presence in a male-dominated field?

Tons. For instance, lawyers: One-third of lawyers are now women, compared to less than 5 percent in the ‘70s. And yet we still find that the highest-paid lawyers—the highest ranks in law—are still dominated by men, and that’s been a struggle for 70 years. That’s endemic of a larger social problem we have to address.

How does the gender disparity affect your job?

I think working remotely helps a lot. I’m on the screen, so it’s not such a salient part of my day-to-day experience as a programmer, but the absence of gender parity is still something that I notice.

There’s been work to address the lack of women web engineers, but we haven’t cracked the nut yet, I guess. A huge factor for me in going to Etsy was that it was committed to a more equitable environment. I feel like I’m in sort of this happy place, or at least a happier place than most other women in my industry.

But it’s hard. It’s hard to swim against the tide. Maybe it will come to a breaking point like it did with other careers in the ‘60s.