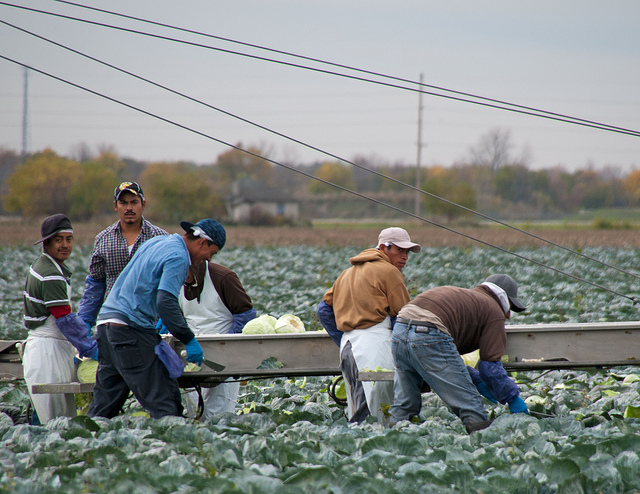 Guestworkers are often lied to and defrauded by shady recruiters. A new Yelp-like web site for these workers aims to change that. (Flickr / Bob Jagendorf)

In 2007, Adarely Ponce Hernández saw an announcement in her hometown of Chapulhuacán, Mexico, for jobs picking apples in the United States. Not only were the wages far higher than what she could make in Chapulhuacán, but the work was completely legal, secured through a U.S. temporary visa program known as H-2. She and her sister went straight to the recruiter who placed the announcement and paid 2,000 pesos apiece—about $180 at the time—to reserve their spots.

But the recruiter kept pushing back the date of their interview for the visa: “Next month, next month.” He started demanding more payments. Hernández and her sister reluctantly obliged with another 1,500 pesos each. Then the recruiter disappeared, taking their money and the promise of jobs with him.

Hernández’s experience is common for people in Mexico looking for legal work in the U.S. as “guestworkers,” temporary laborers who return to their home countries when their jobs are finished. Centro de los Derechos del Migrante (CDM), a migrant worker advocacy group with offices in the U.S. and Mexico, reported in a study of Mexican workers recruited for the H-2 program that more than half their subjects had paid illegal recruitment fees. One in ten had paid fees for jobs that turned out not to exist at all.

After she and her sister were cheated in 2007, Hernández was defrauded two more times by false recruiters. She knew she was taking a risk by trusting them. But Hernández had taken out a loan to pay for her first round of recruitment fees, and she couldn’t repay the loan on Mexican wages, even after moving to a bigger city for a better-paying restaurant job. Each fraud put her further in debt and more desperate for a U.S. job. And there was no way to tell a good recruiter from a bad one.

That may have just changed. In its recruitment report, CDM called for a comprehensive database of recruiters and employers. Neither the U.S. nor the Mexican government seemed likely to create one. So they did it themselves, launching a Yelp-like website for guestworkers, Contratados.org. Users can write, phone or text-message reviews of recruiters and employers. In addition to the reviewing platform, Contratados includes comics and brief radio plays created to educate workers on their rights.

The site is designed for people with limited computer skills and Internet access, as is the case with most migrants. In contrast to Yelp, Contratados’ users do not have to create an account, a feature CDM says is important for protecting workers from retaliation for negative reviews.

Only a handful of reviews have been posted so far, but they are already serving to warn others of shady enterprises. A recruiter in Monterrey, Mexico, gets two one-star reviews. “This man cheated me,” one of the reviews says in Spanish. “In the end he gave me a fake visa pasted into my passport and charged me 35 thousand pesos, I was detained at the border and put in jail.” A landscaper in Colorado also gets one star. “The work was bad because we didn’t live with dignity,” the review says in unpunctuated Spanish. “There were lots of us in one house and we couldn’t cook or bathe properly.”

The Mexican government maintains a database of employment agencies and recruiters. But its weaknesses came into the spotlight last year when one of its registered agencies defrauded more than 3,000 would-be guestworkers for around $500 each.

“There’s no accountability mechanism built into this registry,” says Sarah Farr, a project coordinator for CDM, whose group is beginning to reach out to migrant communities about the site. “I could just fill out this form now and the Mexican government would stamp me and say ‘Okay, you’re registered.’”

CDM keeps its own database of recruiters. Farr says that isn’t enough, either.

“This universe is much larger than what we’re able to see or what either government is able to see, and migrant workers are in the best position, collectively, to fill that informational vacuum.”

Adarely Hernández eventually found a job processing crawfish through a friend and has been able to pay off her loans. Direct hires by employers are rare, however, and many workers aren’t so lucky. If she’d had more information, Hernández says, she might never have lost over 11,000 pesos.

“I would have been able to know good recruiters from bad ones, instead of having to just take a risk and see what happened,” she says.