Students to Teach for America CEOs: You Are ‘Complicit’ in Attacks on Public Education 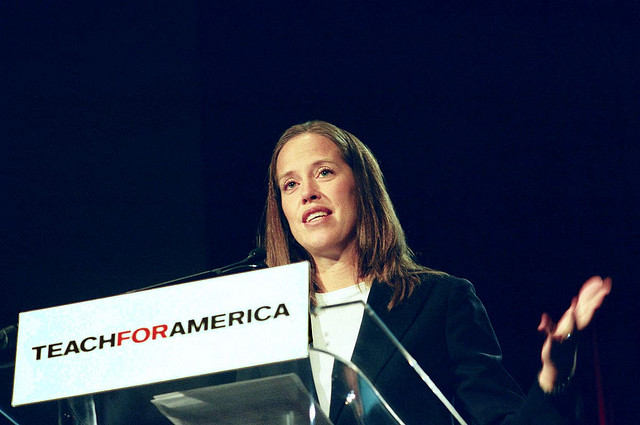 Dani Lea, a sophomore at Vanderbilt University, believes that Teach for America (TFA) teachers in her high school in Charlotte, North Carolina, were detrimental to her learning experience and for those around her. Lea claimed that her principal didn't even know which teachers were members of TFA and which weren't.

The volley took place during an unusual open meeting at TFA’s midtown Manhattan headquarters November 13 between United Students Against Sweatshops (USAS) activists and TFA’s top leadership, which offered the meeting after a widespread USAS campaign against the organization that includes visiting college campuses to question the education organization’s projected image as crusading do-gooders in American public education.

USAS is the country’s largest student labor organization, which has emerged in recent years as a serious force to be reckoned on labor issues ranging from sweatshop apparel production to campus union drives. The group’s main gripes with TFA and its Peace Corps-like model for American education, bringing college students—most from elite universities—to teach for a short period of time in some of the country’s poorest school districts, are that it is inadequately training teachers and promoting a for-profit, anti-union education reform agenda.

The Nation also recently released TFA documents regarding its response to critical press, adding to TFA’s recent headaches. USAS is demanding that TFA increase teacher training well beyond five-weeks and sever ties with anti-union corporations such as Walmart; USAS groups at universities like Harvard have demands their schools sever ties with TFA.

After offering an olive branch praising the intentions of TFA teachers across the country, USAS activists argued that the organization acts as a convenient staffing organization for municipalities looking to purge their career, unionized teaching staff and switch to a cheaper model based on high turnover.

Eastern Michigan University graduate student Will Daniels said his father, a career teacher in Detroit, was laid off in 2011 as a result of the city’s financial crisis, and said he saw the austerity-minded school authorities forming a marriage of convenience with TFA.  The district could hire “three TFA members for the price of my dad,” Daniels said.

Kramer, who along with his co-CEO Elisa Villanueva Beard, patiently and calmly listened to the students, denied that the organization aims to get rid of existing teachers. “We only place people in open positions,” he said. “We do not force people out of a job.”

Beard also rejected the idea that TFA provides a pool of short-term teachers, saying 60 percent of TFA trained teachers stay for a third year and that while surely many young people think of it is a placeholder position before graduate school or some other endeavor, 67 percent stay in education.

But Harvard USAS activist Hannah McShea countered that in some school districts, teacher layoffs are so massive that veterans are laid off along with the rookies and unsatisfactory teachers. “TFA provides a solution of synthetic teachers,” she said. “It is complicit in austerity.”

Kramer noted that TFA members are sent where there are teacher shortages, although he admitted that it can often be difficult to define what a shortage is. For example, he said, according to the numbers there is not a shortage of special education teachers in New York City, although most city principals would say the opposite.

For Lea, that grey area is the problem. “We’re afraid you’re going to place where aren’t shortages,” she said.

While the TFA leaders stressed that the majority of its members are placed in traditional public schools rather than charters, the website Edushyster published internal documents earlier this year “many charter operators won’t even consider opening new schools without TFA to provide a supply of teacher talent” (emphasis theirs).

USAS national organizer Leewana Thomas said after the meeting that the group was unsatisfied with TFA’s responses. While Kramer said TFA was dedicated to expanding training, he offered little in specifics and didn’t address the issue of corporate ties with companies like Goldman Sachs and Walmart.

These companies, Thomas said, gut wages and benefits for parents and destabilize communities, adding to the impoverishment that contributes to students’ difficulties in the classroom. When asked where TFA should get funding instead, she said, “We think that the funding should be in public education.”

The campaign against TFA is about something bigger than one organization. Students admit that many people who work for the organization or enter into its teaching corps have genuine hopes about improving education, especially for low-income communities and minority students. But the organization’s role in public education, USASers argue, is a strongly negative one.

USAS denied insinuations that it was acting as a surrogate for the American Federation Teachers, saying that while it did accept funding from that union, it receives funding from numerous unions and other organizations which do not steer the group’s agenda.

Student voices are important, and what USAS has to say is important. They’re asking TFA to go back to its roots and place educators where there are shortages rather then being used to lower costs by replacing experienced teachers. They’re raising real concerns about TFA's teacher training and corporate ties.

Kramer and Beard promised to hold further talks with USAS to address concerns and come to a consensus, while Thomas said USAS members at the meeting will go back to their campuses and continue to highlight what they see as educational injustices encouraged by TFA.