Are “Works Councils” Really Such a Good Idea for Workers and Unions? 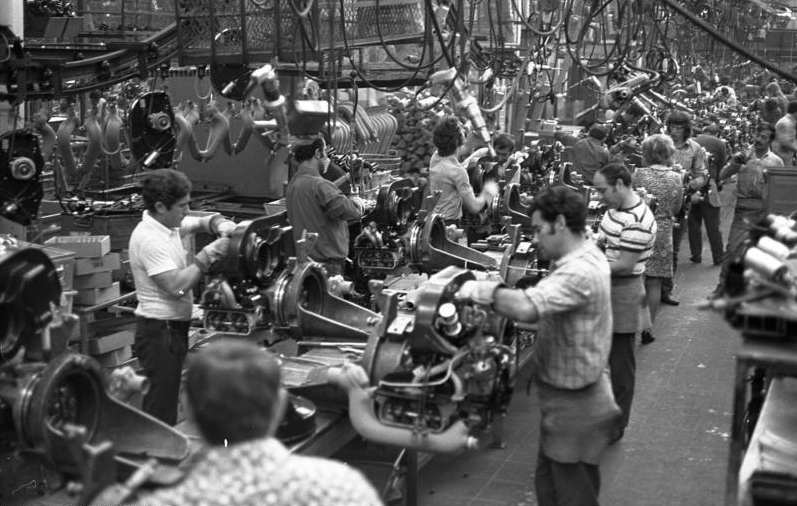 Volkswagen workers in Tennessee will soon have a works council like their counterparts pictured here in Germany. But can works councils actually build power for American workers? (Wikimedia Commons)

Labor may be at a turning point in this country. New campaigns have started to infuse fresh energy into a moribund and declining movement, and new models of collective action are being proposed in the course of these ongoing efforts. While the existing National Labor Relations Board (NLRB)/National Mediation Board (NMB) certification election-contractual bargaining system still functions on paper, in practice it has broken down.

Employers do not hesitate when flouting the law while trying to head off a union vote going against them. Even when they lose, bosses are willing to sandbag their workers by refusing to even bother to negotiate, and striking has been defanged as a tactic through legal injunction and wrongly decided precedent about permanently replacing strikers. While corporate campaigns, which focus on pressuring shareholders and embarrassing companies into acting humanely, have met with some success, they have not delivered the kind of widespread worker empowerment that the postwar period did.

There’s absolutely no doubt that if workers are going to ultimately make their own destiny that a new model or approach is needed for unions. One that has been proposed, separately by the UAW at the much-discussed Chattanooga, Tennessee, Volkwagen plant, by Harvard Law School professor Benjamin Sachs, and by labor lawyer and writer Tom Geoghegan is the implementation of works councils in the United States.

The works council model is one that is used across Europe, with the most prominent examples being in Germany, although such councils also exist in the United Kingdom, France, and Belgium. There, employees are elected to four-year terms on the works council, where they negotiate the terms of employment and workplace conditions with the employer.

In Germany, this is enabled through the Works Constitution Act, which was first passed through parliament in 1952 and allows the formation of works councils in any private workplace of at least five people. While the employees who serve on the works council are not required to be in a union, over 77 percent of them are. As such, the works council functions as a strong facilitator of union power in German labor relations, especially in the large auto plants there.

Works councils are imagined in the United States as an unprecedented form of economic democracy. Our conception of a Board of Directors has very little to do with a company’s employees or their demands; rather, it is an oligarchy of investors and corporate officers who run our nation’s business apparatus. So the thought of workers getting a say in the dealings of two of our nation’s largest industries, automotive and fast food, is one that is understandably exhilarating for those supportive of the labor movement.

But there are a few problems with implementing such a model in the U.S.. First, the National Labor Relations Act explicitly bans “company unions,” a worker organization dominated by an employer rather than as an independent body for workers, in Section 8(a)(2). Sachs makes that clear in his piece, saying that implementing a works council model at McDonalds would require significant legal wrangling to avoid being proscribed by Section 8(a)(2).

Another concern is that the works council model could mollify working-class radicalism at a time where it is on the upswing. Few could have predicted that fast-food workers would be engaging in waves of walkouts with the demand of a $15 an hour minimum wage. Combined with the recent demonstrations against state violence in major cities across the country, spurred by the decisions not to prosecute police officers in the Michael Brown case in Ferguson and the Eric Garner case in New York City, and the connections between these movements, working-class organizing might be in a stronger position now than at any other time since mass deindustrialization began in the 1970s.

Furthermore, story after story is raising awareness of how other countries have paid their fast-food workers a living wage and still managed to turn a profit. To turn all of this potential for a paradigm-shifting movement and steer it towards a highly formal and bureaucratic process before any real gains have been secured would seem to be an error. In fact, many have argued that the bureaucratization of the labor movement is a key part of why it is in such dire straits in modern times. Why voluntarily repeat the errors that got us where we are today for a system that we are not even sure will work in the United States?

Finally, is winning a process that privileges the interests of management at the same level as the interests of the workers really worth it? Given all of the effort, energy and time that would get put into organizing works councils, is it a big enough win? The purpose of works councils is for smooth functioning of commerce at a given employer by addressing the collective concerns of its workers. Whether the emphasis falls on the front half of that statement—the smooth functioning of business—or the back half—addressing workers’concerns—in an American implementation of works councils remains up in the air.

At a time when labor is frequently discussing issues in terms of “labor-management partnerships,” will workers’ interests be better served by a system where the union is not even an independent body but rather an organ inside the corporate structure?

Works councils have significant power in Europe and are able to redress major issues for the workers who participate in them. However, they gained this power in the shadow of the Cold War, at a time when capitalism had to provide Western workers with some concessions lest they fall “victim” to Communism.

That threat does not exist now. There is no indication that the works councils that are being proposed would be able to address the larger problems that the working class faces on a day-to-day basis. While alternatives to a dysfunctional NLRA-focused process should be considered, the idea of a labor-management partnership can only function when labor has sufficient power to make everything stop.

Labor can only rebuild power through advancing the interests of the working class as a whole. Investing more in organizing, training, mobilization and educating union workers about their rights is a part of this equation, but only by fundamentally aligning the labor movement with the communities it represents will we start to recover.

A version of this post first appeared at Hack the Union.