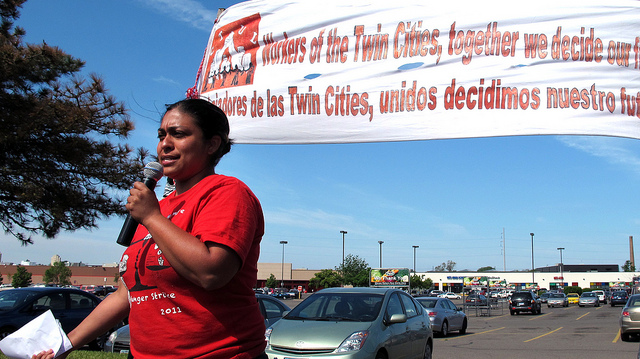 Today I will accompany U.S. Rep. Keith Ellison, representing low-wage workers’ voices at President Barack Obama’s sixth State of the Union. While I am honored, I go with a conflicted heart.

Yesterday the radio was filled with speeches from the late Dr. Martin Luther King, Jr. Today I will stand beside the first African American to be elected to the House of Representatives from Minnesota listening to a speech from the first African-American President of the United States. Clearly we live in changed times, demonstrating that through organizing we can win important change.

Yet in many respects times have not changed for the better. Nearly 50 years ago, Dr. King talked about the dangers of income inequality in the country, stating: “the problems of racial injustice and economic injustice cannot be solved without a radical redistribution of political and economic power.” Since then there has in fact been a radical redistribution of economic power, but not in the direction imagined by Dr. King.

Today, the wealthiest 0.1% of the population in the United States controls as much of the wealth in this country as 90% of the population. Let those numbers sink in for a second. In 2013, the average CEO in the United States earned 331 times as much as the average worker, and 774 times as much as minimum wage workers. In half a day’s work, the CEO of McDonald’s Corporation receives more compensation than the workers who produce his wealth are paid in an entire year.

Let’s move beyond statistics to understand what this means in real life. I work at the Centro de Trabajadores Unidos en la Lucha (CTUL), a low-wage worker led organization that is fighting for fair wages, fair working conditions, and a voice in the workplace for all workers in the Twin Cities metro area. Members of CTUL build and reconstruct the homes in our communities, yet cannot afford to put a roof over the heads of their own families. Members of CTUL work for fast food companies, surrounded by an overwhelming abundance of food, yet often cannot provide food for their own families. Members of CTUL work for contracted companies maintaining the sleek and clean images of large stores like Kohl’s and Home Depot, yet they cannot afford to shop in the very stores they clean.

Every day, millions of workers stress about how to cover basic needs for their families on wages that fall well below the poverty level. Every day, workers endure the arrogance and disrespect of companies that constantly increase workloads, lower wages, and threaten workers who complain.  Every day, people drive home from work worrying that they will be pulled over simply for being a person of color. Every day, parents worry about a racist system that allows police to kill unarmed youth of color. And all of these combined days create a reality where the wealthiest, mostly white Minnesotans live on average eight years longer than the poorest Minnesotans, mostly people of color.

Despite all of this, I do not by any means feel defeated. Low-wage workers across the country are standing up, refusing to be relegated to the back of the bus of the U.S. economy. From retail janitors in the Twin Cities to farmworkers in Florida to fast food workers across the nation, low-wage workers are organizing and winning. Yesterday on MLK Day, and over the past month, hundreds of thousands of young people have marched in the streets, declaring #BlackLivesMatter.

Our voices are echoing through the halls of political and economic power structures. Target Corporation is now following the lead of retail janitors by implementing a Responsible Contractor Policy regarding the contracted cleaning of its stores. U.S. Congressman Keith Ellison is working tirelessly to amplify workers’ voices in Washington by calling for policies to achieve justice for low-wage workers across the country. President Barack Obama is now calling for an increase in the federal minimum wage and the right to guaranteed paid sick days for all workers.

While all of this is important, it’s not enough. As you read this, the city of Bloomington is threatening to sue organizers for declaring that Black Lives Matter in the sacred halls of American capitalism, Mall of America. Even if we win paid sick days and a $10.10 minimum wage, millions of workers will still live in poverty.

Veronica Mendez Moore is co-director of the Centro de Trabajadores Unidos en Lucha in the Twin Cities in Minnesota.