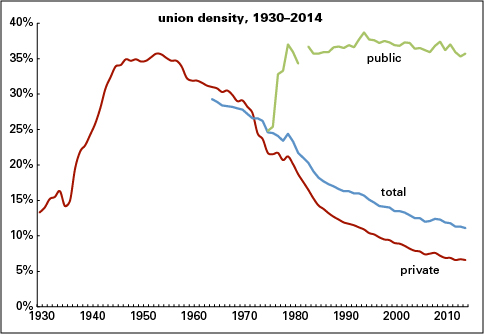 You can see why bosses hate unions: Even at a time when they're at their weakest in almost a century, they still deliver the goods for workers. (Doug Henwood)

Above is a graph of union density over time. Current private sector density is half what it was in 1930, just before the great surge in membership during the Depression. Its rate of decline has slowed over the last decade, but there’s no sign of a turnaround. And despite the uptick in public sector density last year, the line has been essentially flat for 30 years.

Density declined for most occupational and industry groups, with some interesting exceptions. By occupation, management, law, healthcare practitioners, and sales all bucked the downward trend; by industry, broadcasting/telecommunications; arts, entertainment, and recreation; accommodations; and bars and restaurants all rose (though the last just barely). The lists of gainers are at odds with the traditional image of unions. Efforts to organize retail showed little payoff, as density fell 0.2 point. Within the public sector, union membership rose at the federal and local levels, and declined at the state level—it looks like that’s where the effort to destroy public sector unionism is having its effect.

Union status matters for wages: overall, unionized workers earned 27% more than nonunion (measured by median weekly earnings for full-time workers). The effect was especially pronounced for weaker, more discriminated-against demographic groups. The youngest group, aged 16–24, enjoyed a 28% union premium; the advantage declined with each successive cohort, down to 12% for the 65+ set. Women aged 25 and older enjoyed a 27% premium, compared to 15% for men. White men (16 and over) had a 20% union advantage, compared with 32% for white women; for black men, the premium was 29%, compared to 34% for black women; and for Hispanics, it was 44% for men and 46% for women. Asian men were a notable exception, with the unionized earning 5% less than the non-unionized—but Asian women showed a 14% union premium.

It’s no wonder employers hate unions so much. As profoundly flawed as American unions are, they can vastly improve the wages and working conditions for their members.

Note: all the figures above refer to union members; they don’t include the 1.2% of the workforce that is represented by unions without being members. If you include them, all the trends are almost identical to what’s outlined above.