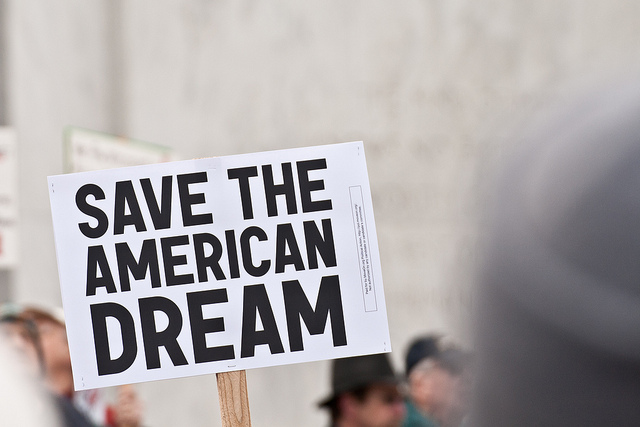 There is a strong correlation between union membership and income equality in the U.S.   (Lisa Norwood / Flickr)

Why do unions matter? They increase wages and benefits for their members, sure—but do they have any impact on society as a whole?

The Economic Policy Institute (EPI), a progressive thinktank, published a chart earlier this week showing a striking correlation between the decline of union membership and the upsurge of income inequality.

While a variety of factors affect wealth inequality and union membership, it’s hard not to notice that the two graphs are nearly mirror images of each other: As union membership increases, the share of wealth by the richest 10 percent of Americans decreases; as membership goes down, the wealthy’s share goes up.

According to the chart, based on studies by Colin Gordon and an updated analysis of tax data by Thomas Piketty and Emmanuel Saez, the percent of public and private sector workers in unions continues to fall, reaching its lowest rate since 1936 at 11.1 percent last year. At the same time, the share of income going to the top 10 percent of wage earners reached an all-time high of 47.8 percent in 2012.

As membership increased after 1936 during the Great Depression, peaking at 33.4 percent in 1945 and staying about the same until 1960, the top 10 percent’s share of wealth fell. At a height of 46.3 percent in 1932, the share of wealth held by the richest tenth fell to 31.5 percent by 1944, remaining stable till about 1980. As union membership steadily declined after 1980, the wealthiest Americans saw their share of riches surge.

As Doug Henwood recently noted, despite the decline of overall membership recorded in the most recent figures from the Bureau of Labor Statistics, unions still improve wages and working conditions considerably, especially for demographics subject to the most workplace discrimination.

The EPI’s chart is a visual testament to unions’ ability to impact not only their own members’ lives, but also the distribution of wealth in society as a whole. As unions decline, it's not just union members who lose out—the entire society loses one of the main forces that can help make sure wealth doesn't congeal among the richest.