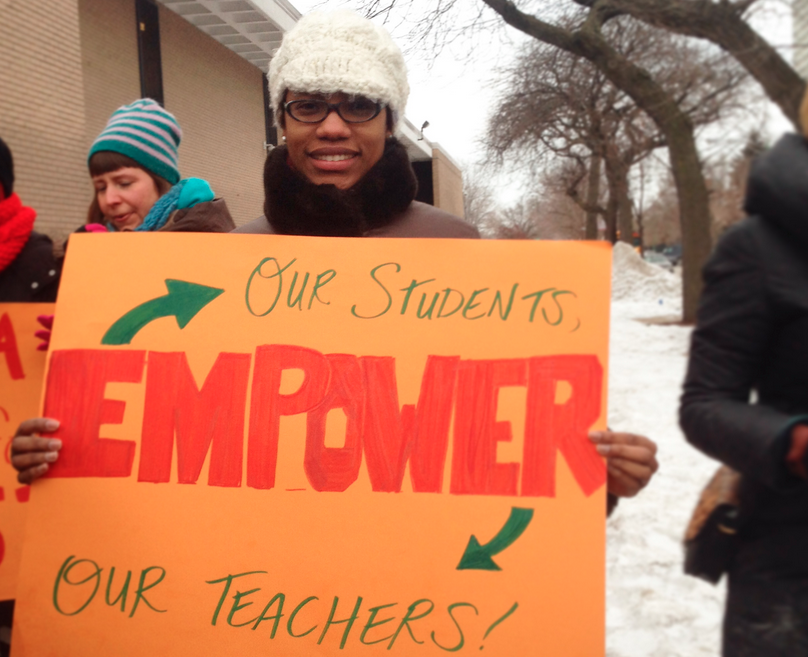 Teachers and staff at Chicago’s Urban Prep Academies and North Lawndale College Prep (NLCP) announced on Friday they are seeking to form a union, joining the growing movement to organize charter school teachers in Chicago and around the country. Friday’s announcement follows other charter school unionization efforts in Chicago including the United Neighborhood Organization network and several Chicago International Charter Schools, and came just days before the city’s mayoral race.

Later that day, several dozen people rallied outside Urban Prep’s Bronzeville campus in 10-degree weather. Speakers and supporters included teachers, staff, parents, students and union and community members, who overwhelmingly cited concern with what they say is frequent teacher turnover and a resulting instability for teachers and students.

Travis Ryan, another NLCP teacher, said, “There is nothing sadder than when we see a student who has returned home from college who has lived a dream and comes to speak about it. They’re so excited to speak with their teachers—who are no longer there.” Ryan called the turnover crisis “a terrible stain on the charter school system” and believes unionizing can deliver better compensation, clearer expectations and the security of due process.

As hostility to teachers unions by some education reformers and government officials has risen in recent years, the number of charter schools—schools which are largely publicly funded but privately run—has seen a dramatic increase. As the New York Times reports, many charter school backers see teacher unions as incompatible with charters, as they say the schools “are more effective because they are free from the regulations and bureaucracies that govern traditional public schools.” Supporters of charter school unionization say collective bargaining allows teachers to secure the resources and conditions that create quality teachers and stable schools.

“I get that charter schools have great flexibility to innovate,” said union supporter Valerie Leonard of the Lawndale Alliance, a community organization. “However, this flexibility should not come at the cost of equal pay and decent work conditions.”

According to Catalyst Chicago, if Urban Prep and NLCP’s unions are recognized, “it would mean nearly one in four Chicago charter schools would be unionized, likely the highest union density of charter schools in any major school district in the country.”

Mayoral candidate Jesus “Chuy” García attended Friday’s announcement to support the unionization effort. When teachers asked for Mayor Rahm Emanuel’s support, Emanuel spokesperson Steve Mayberry said in a statement, “Just as he was supportive when the teachers at UNO and other charter schools decided to organize with a union, Mayor Emanuel fully believes in the fundamental right of workers to bargain collectively.”

According to the Sun-Times, Garcia said Emanuel’s stance is hypocritical: “To all of the sudden come out for a variety of measures like increasing the minimum wage, like saying there ought to be collective bargaining—that they should be free to unionize—stands in contrast to his effort to break the Chicago Teachers Union several years ago.”

The union has created a petition asking the mayor to issue such a supportive statement.

Administrators at both charter school networks say they support their employees’ right to organize but would like them to conduct a secret ballot election. Urban Prep’s chief operating officer Evan Lewis said, "We believe this is a fair and democratic process that allows all teachers to have their voice heard, and we do not feel it would be appropriate to rely on any other process that would deprive our teachers of this fundamental right.”

Secret ballot elections are often seen as a union recognition process that benefits bosses, who are able to use the time between the public announcement of the intention to form a union and the union vote itself to engage in a number of anti-union tactics ranging from firing union supporters to one-on-one meetings with workers encouraging them to vote no.

“We’re not really satisfied with that option. … Right now we’re not looking for an election, we’re looking for recognition,” said Urban Prep teacher Mathias Muschal, who explained that a majority of staff members at both charter networks have signed onto a union mission statement. The schools’ management could opt for immediate union recognition based on the majority of teachers who have indicated support for the union or opt for a “card check” agreement in which a majority of teachers simply have to fill out a form indicating their support of the union.

If the union is recognized at the two schools and contracts are reached, some supporters say the next step is to fight for Local School Councils (LSC) at charter schools. Every traditional Chicago public school has an LSC that consists of the principal and elected parents, teachers and community members. LSCs advise or decide on issues like the school’s budget, principal hiring and school improvement policy. The union and parents say they are a key mechanism of democratic control in public schools.

Leonard, of the Lawndale Alliance, agreed. “Charter schools are often run by an out of touch board of directors. We see more venture capitalists, real estate developers, nobody who understand education. ... We need a community voice, we need a parent voice, we need a teacher voice at the table,” she said.