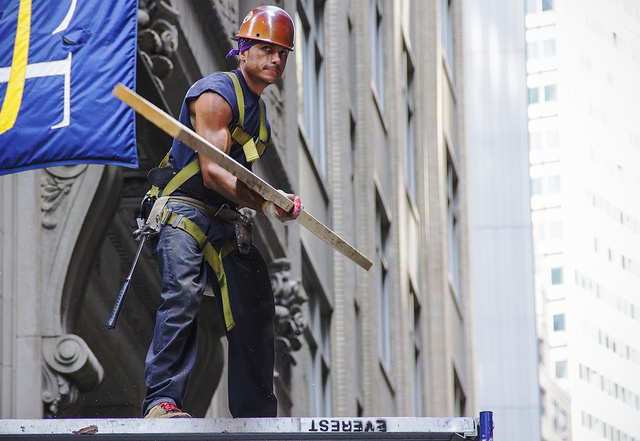 Construction workers in New York have joined the Fight for 15 movement, asking for a higher minimum wage.   (Michael Tapp / Flickr)

From Canarsie, Brooklyn to Lincoln Center, workers in New York rallied in support of a $15 minimum wage on Wednesday.

The most recent day of action in the nearly three-year old Fight for $15 campaign included protests from racial justice activists and workers across industries, and ended with a raucous finale in Midtown Manhattan, where an estimated 10,000 construction workers took the streets against the exertions of both police and union leaders.

“This movement has grown all over this city, from child care workers, to home care workers, to car wash workers, and now construction workers,” said Jonathan Westin, Executive Director of New York Communities for Change, during the afternoon rally organized by the New York City Building Trades Council. Westin’s organization, a former ACORN affiliate, is one of the principal groups behind the fast food protests in New York City, along with the Service Employees International Union (SEIU).

The demonstrations began at 6 a.m. Monday in downtown Brooklyn, where organizers said around one thousand protestors rallied outside a McDonald’s restaurant on the corner of Flatbush and Fulton.

Two hours later, warehouse workers at a UPS facility in Canarsie hosted their own rally with state and city elected officials to demand a $15 minimum wage. Workers say the Brooklyn loading facility is operated almost entirely by part-timers who earn a starting wage of $10 an hour. The starting part-time wage has been raised just once in the last twenty years, from $9 to $10 in 2013, and many of the warehouse workers say they would prefer full-time jobs, according to employees.

“People [think] UPS drivers make a lot of money,” says Chris Williamson, business agent of Teamsters Local 804, whose 6,500 members include the UPS employees. But many don’t. “We got a lot of people, especially my part-timers, still living in shelters.”

UPS Spokesman Dan McMackin says the company’s 125,000 part-time jobs are mostly filled by college students. Asked about the number of full-time positions the company offered, McMackin said it was not a matter of policy but rather “set by our customers. It’s set by how many packages we get.”

“People have been here 10 years who are still part-time,” says Elena Threadgill, who makes $13.70 after four years at the warehouse. Threadgill says full-time positions open up “very rarely.” Because bidding for full-time jobs is based on seniority, newer workers have few chances for advancement. “It’s a long list” to get a full-time job, she says.

The unionized UPS workers twice rejected the contract negotiated by the Teamsters’ international before it was imposed on them in 2014, and Sylvester sees his union’s current demand for a $15 minimum wage as a response to that outcome. “We shouldn’t have taken the $10 [starting wage] two years ago,” he says. Now Local 804 is calling on elected officials to make up the difference with a minimum wage increase. “They’ve done it in Seattle. They’ve done it in San Francisco. If they can do it there, they can do it here.”

City Council Members Alan Maisel of District 46 and Jumaane Williams of District 45 spoke at the rally in support of a $15 minimum wage, as did Assembly Members Martiza Davila of District 53 and Felix Oritz of District 51. The State of New York does not grant cities the power to set their own minimum wage. In January, Governor Cuomo proposed a new state-wide increase to $10.50 and $11.50 for New York City by 2016.

“A lot of people think it should be raised even further,” says Maisel, whose district includes Mill Basin and Canarsie. “Anything you do to raise the minimum wage is fine, but the question is whether or not it goes far enough.”

All of the officials addressed the rapidly rising cost of living in the city. But Council Member Williams, whose district includes East Flatbush and Flatlands, said something that was echoed throughout the day: “The fight to raise the wage, the fight for police reform and the fight for better housing are all linked.”

“The first thing we can start to do is to make sure people are employed, and make sure they are employed at a livable wage,” he said. “It won’t happen unless we make noise.”

At midday, starting at Lincoln Center, a contingent of fast food and retail workers marched with police reform activists to a McDonald’s on Broadway and 71st street. There they performed a four-minute “die-in”—a silent, prone protest increasingly popular in demonstrations against police shootings of unarmed people of color.

With the demonstrators back on their feet, activists spoke to the crowd about the unity of the two protest movements. Karl Komodzi, 24, of the activist group Black Youth Project 100, explained how the lack of stable and adequate employment shapes the lives of those who often end up victims of police shootings.

McDonald’s employees who joined the march complained about the difficulties of meeting the rising cost of living, and the uncertainty they faced about a future of low wage work.

Andy Ramirez, 22, works at McDonald’s on 17th street in Union Square. With his daughter, Ariana, sitting in a pink stroller in front of him, Ramirez says the $270 he makes per week barely covers his living expenses. He pays a $200 week to rent the single room he shares on 146th street with his daughter and wife, who isn’t working because she is eight-months pregnant.

Unable to find work after earning an associate’s degree in computer programing, Ramirez began a seasonal job at Macy’s for $10 an hour. When that ended, he applied to work at McDonald’s, where he has been for seven months.

Julia Andino, 20, also worries about raising her three-year old son as an employee in a McDonald’s in downtown Manhattan. She says the hours are unreliable and decided by management on a weekly basis, which complicates child care. “The last job I had, at MetroPCS, it was either my job or my child,” she says. Andino has worked at McDonald’s for 4 months. “With a union I’d be more secure with my job. I don’t feel like they can fire me over any little petty situation.”

The Midtown rally was the most unruly of the day, with the stentorian LaBarbera barking union slogans through a microphone to the thousands of construction workers packing the sidewalks, many of whom appeared to be just off of work and feeling restive. The speakers discussed the JDS construction company, with which the Building Trades Council is currently embroiled in a dispute. The company has not signed a union contract for workers at its 111 West 57th work site. Once completed, the 80-story condominium will be the tallest building in New York ever built without union labor.

Towards the end of the hour, the two groups of construction workers on opposite sides of the street overcame police resistance, halting traffic amid thunderous cheers. Terry Moore, Business Manager and Financial Secretary Treasurer of Metallic Lathers and Reinforcing Ironworkers Local 46, took the microphone to ask the membership to clear the street.

“We abide by the law,” Moore repeated.

After a brief retreat, the construction workers returned to march for two blocks, before merging with those who had participated in earlier rallies. Accompanied by two marching bands and a dance team, the smiling crowd continued to Columbus Circle, Lincoln Center and Central Park West.

Maritza Silva-Farrell, an organizer with the community-labor coalition Align NY, said she was not surprised when the police lost control. “I think people are tired of waiting. People are fed up. This low-wage economy is not what we need in New York City.”