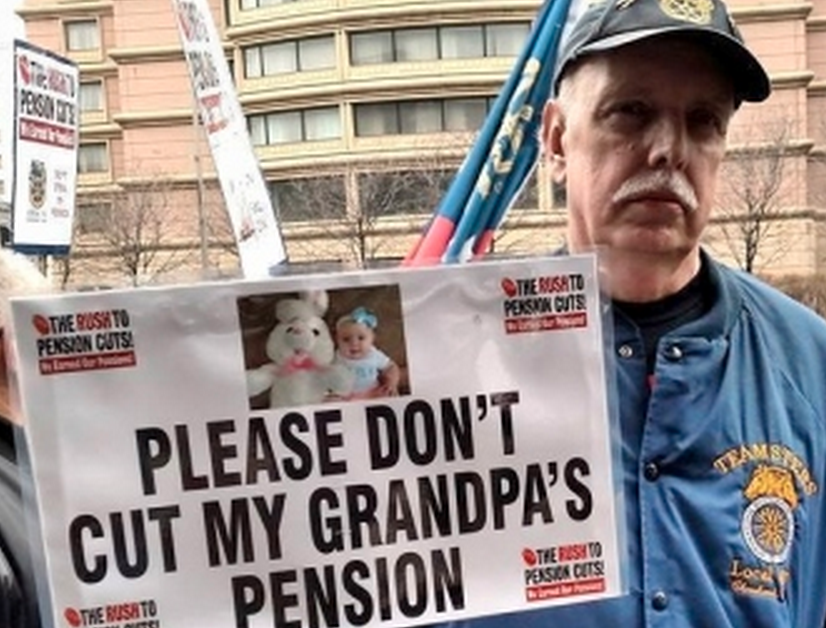 The cuts would likely be devastating for hundreds of thousands of retirees. (Teamsters for a Democratic Union)

The likelihood that hundreds of thousands of union members nationwide won’t be receiving the full pension benefits promised to them is becoming clearer as federal regulatory agencies in Washington, D.C., move to implement new pension legislation quietly approved in the final weeks of 2014.

As reported by Cole Stangler in In These Times late last year, legislators rushed to amend a 40-year-old law governing private-sector multiemployer pension plans as part of broader budget legislation that was considered “must pass” by both Republicans and Democrats. The new law, which has been the subject of heated debate in Washington for more than a decade, is aimed specifically at union pension plans facing long-term insolvency and gives the trustees of such plans new freedom to cut benefits to retirees as a way to reverse the declining fortunes of those plans. President Barack Obama signed the measure, called the Multiemployer Pension Reform Act of 2014 (MPRA), into law on December 16.

“These people [affected pensioners] don’t know what’s going to happen to them” as a result of cuts authorized by the law, says Bob Amsden of the newly formed Wisconsin Committee to Protect Pensions. A Teamster truck driver for 33 years, Amsden says he’s now in danger of losing a substantial portion of his own pension, and that hundreds of thousands of other union members are facing similar cuts.

There are numerous unanswered question on how exactly the MPRA  will be implemented in the coming months by the Department of the Treasury and other federal agencies, but a troubling early sign for the future comes from the Center for Retirement Research at Boston College, which has compiled a list of the 100 union pension plans deemed likely to face benefit cuts.

The list is bad news for thousands of union members, or retired union members, at the International Brotherhood of Teamsters, United Mine Workers of America (UMWA), Bakery, Confectionery, Tobacco Workers and Grain Millers International Union (BCTGM) and a varied collection of smaller unions.

The list is largely speculative, concedes Center for Retirement Research spokesperson Amy Grzybowski, and is based solely on a mathematical analysis of publicly available financial data rather than a detailed examination of each of the individual pension plans. The presence of a union pension plan on the list does not necessarily mean that plan trustees will seek cuts, or that the Treasury Department will approve any proposed cuts, as required by the new MPRA law, she says.

Nevertheless, the list does provides a useful “beginning guidepost” to the specific union pension plans facing severe financial problems that can lead to benefit cuts for pensioners, explains Karen Friedman, Executive Vice President of the Pension Rights Center, a Washington, D.C.-based advocacy group. She cites in particular the Teamsters’ Central States Pension Fund—which handles pension accounts for an estimated 411,238 union members and retirees spread out over much of the country—as the largest and most prominent union organization named in the Boston College report.

“This [MPRA] legislation was written for the Teamsters to begin with,” Friedman says, and will affect other regional or local Teamster plans in addition to Central States, notably the Western Pennsylvania Teamsters & Employers Pension Fund, which handles pension accounts for some 35,000 workers and retirees.

The fear now emerging among pensioners in the Central States Fund is very real, comments Sue Cole, a union activist and spouse of a retired Teamster in St. Louis, Missouri. “My phone started blowing up” with calls from retirees worried that their benefits will be slashed, she says. If rumored pension cuts are enacted, “People are going to have to go on food stamps, people are going to lose their homes.”

Cole is helping organize Teamster pension activists to head off unfair cuts. They held their first public protest April 8 at a meeting of Teamster officials in Chicago, backed by Teamsters for a Democratic Union and others, and are beginning to lobby the Treasury Department and other agencies to insure that rules to implement MPRA will provide protection for vulnerable families. Cole and other activists like Bob Amsden also intend to lobby Congress for outright repeal of MPRA.

Union members or retirees are at risk in pension plans aside from the Teamster-related organizations cited in the Boston College report. Among the largest are:

One expert in multiemployer pensions tells In These Times that MPRA has a lot of protections for union members, and that the drawbacks of the new law are outweighed by its advantages.

Randy DeFrehn is Executive Director of the National Coordinating Committee for Multiemployer Plans, a Washington-based labor-management group that lobbies on union pension issues. DeFrehn’s group supported MPRA as a way to keep endangered pension plans afloat, he says. Doing nothing would just allow such plans to fail entirely, he says, with even worse consequences for pensioners. Any cuts under the law will be a “strictly voluntary” choice by pension trustees (although not voluntary to individual pensioners), according to DeFrehn, and must be approved by the Treasury Department. Also written into the law are certain protections, he says, like exemptions from cuts for disabled pensioners or individuals over 80.

The Treasury Department is beginning work with the Department of Labor and the government Pension Benefit Guaranty Corp. to devise rules to insure that any cuts are both necessary and fair, DeFrehn continues, and those rules are expected to be published in the next several months. Rumors about those rules are rampant, he allows, and it is “really irresponsible to rouse old people that way.”

One labor leader with long experience in union pension issues says that the MPRA was a necessary step for some of the most troubled retirement plans. Wendell Young IV, President of United Food and Commercial Workers Local 1776, says “some plans have seen their [financial] contributions from employers dry up because of bankruptcies or mergers or whatever. The plain fact is they will never be able to pay all the benefits that the members expect.”

Several Local 1776 plans are underfunded, he says, but the union has been working with employers over a number of years to correct the problems, so no MPRA cuts are expected for Local 1776 pensioners.

“This is a problem that has been out there for a long time, so none of this is a surprise,” to union officials or employer companies, Young adds.