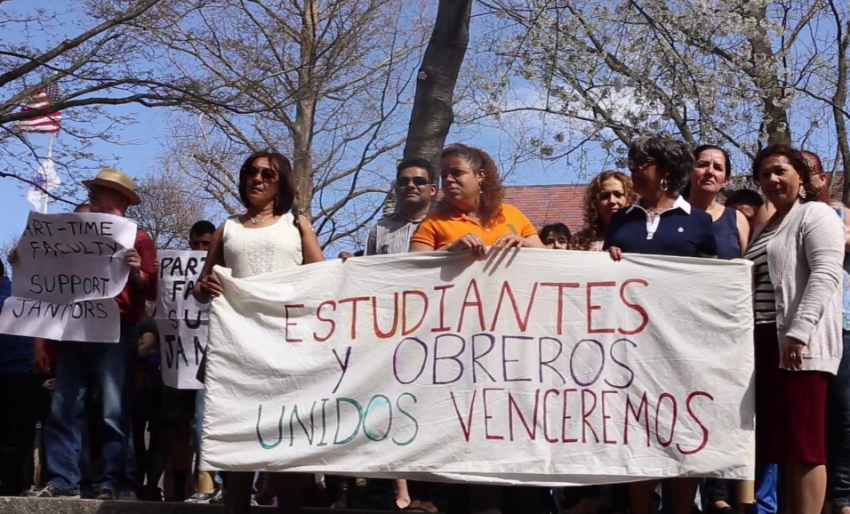 The university has responded by enclosing the students within a fenced-in area. (Tufts Labor Coalition / YouTube)

Tufts University students launched a hunger strike and took over a quad next to the Medford/Somerville campus’s main administrative building Sunday to protest planned layoffs of 35 janitors. Five undergraduates joined the “indefinite” hunger strike as a show of solidarity with the janitors, 17 percent of whom are slated to lose their jobs. Dozens more students set up tents on a quad they plan to occupy day and night until the cuts are halted.

Adelaida Colon, a custodian at Tufts for the past 18 years, doesn’t know what she’d do if she lost her job. “It would affect me immensely,” she says. Her husband is disabled and hasn’t been able to work for 12 years, making her the breadwinner. “He depends on me, because his income is very small, $800 a month.”

Because of her seniority, Colon’s job is probably safe for the moment. But she says the cuts would be devastating for all the janitors—even the ones who kept their jobs. She and her colleagues would have to take on the extra cleaning. “I think if I had any more, I couldn’t do the work,” she says. The student group organizing the protests, Tufts Labor Coalition (TLC), says campus facilities have already expanded nearly 10 percent in the last five years, increasing the area that needs cleaning.

The janitors are not employed directly by the university, but are subcontracted through real estate services giant DTZ. Nevertheless, activists says the university is responsible for the layoffs because it decided to slash custodial costs by $900,000. The university said in an op-ed in the Tufts Daily that eliminating one in six custodian positions is “one element of an institution-wide commitment to improve operational efficiencies so that Tufts’ limited resources can be directed to its core mission—providing an exceptional education to talented students and recruiting outstanding faculty to teach and mentor them.” It says DTZ’s “high-efficiency, labor-saving equipment” will help the janitors “clean more areas in less time” and that DTZ will attempt to hire laid off workers elsewhere in the city.

TLC points out that the university’s assets and fundraising have risen steadily over the past five years—as have student charges. Last year Tufts fundraised $91 million and held assets totaling $2.1 billion. University President Anthony Monaco made over $760,000 in 2012.

Students say they resorted to the hunger strike after months of pressuring the Tufts administration proved fruitless. Marches, sit-ins, biweekly meetings with administrators and even resolutions from the Medford and Somerville city councils condemning the layoffs did not move the university. TLC and the janitors together decided on more drastic measures, partly because the janitors are contractually forbidden from striking themselves. They say the strike and occupation will continue until the administration agrees to suspend cuts until the next time SEIU Local 32BJ renegotiates the janitors’ contract in 2016.

“We don’t want to be hunger striking,” says first-year Mica Jarmel-Schneider, one of the five students who stopped eating Sunday afternoon. He emphasized that the hunger strike and occupation are about the janitors, not the students. “It’s not fun for us, and we’re not trying to draw attention to ourselves. But we really see this as a huge way to leverage pressure and power against these cuts. And we hope that the university will listen to us because we are literally in their backyard.”

The university responded to the occupation in its backyard by enclosing the occupiers in a fenced-in perimeter. TLC member Anna Gaebler says that the sole opening in the fence is under constant police monitoring. A Tufts student ID is required to enter the quad, keeping out janitors and media. “This morning one of the custodial workers, Paula, tried to come in and say hello to all the students who have been working with her, and the police removed her from the space,” Gaebler said.

The university has not given an official explanation for the fence. It responded to interview requests with a statement saying that students are free to demonstrate and that “the university is doing its best to keep the demonstration area secure.” Across the quad, a stage is being readied for graduation.

This is not the first fight over janitors’ jobs in Tufts’ history. In the 1990s, Tufts switched from directly employing custodians to subcontracting them out. That sparked a process of cutting wages, benefits and jobs—and precipitated a fight much like the current one. Protestors held weekly pickets of the same administrative building now in sight of occupiers’ tents. “The behavior of the Tufts Administration is an echo of an alarming development, the corporatization of academia,” physics professor Gary Goldstein said in a 1998 speech on the janitors’ struggle to the Ethical Society of Boston.

Indeed, janitorial services are emblematic of the rapid spread of corporate subcontracting. In his book The Fissured Workplace, economist David Weil describes janitorial companies as “in the vanguard of fissuring,” the splitting off of jobs that once were managed inside corporations. He documents how subcontracting eroded wages and benefits, citing one study that found that “janitors who worked as contractors earned 15% less than those working in-house.”

Tufts’ justification for cutting the janitors’ jobs sounds a lot like Weil’s explanation for why corporations subcontract. Corporations increasingly focus on their “core competencies,” their defining competitive advantages or areas of expertise, and ruthlessly cut costs on everything else. Tufts wants to focus on its “core mission” of education and “improve operational efficiency” everywhere else.

Yet the university is not a corporation but a non-profit with a stated commitment to all its community members. Its 10-year plan identifies “recognize our valued staff” as one of its foundational initiatives.

Jarmel-Schneider thinks the administration’s refusal to listen to the janitors speaks for itself. “It’s about the bottom line for them,” he says.

Adelaida Colon emphasizes that her job goes way beyond janitorial work. “We don’t just clean buildings,” she says. “We also keep an eye out for the students. If a student gets sick, we keep an eye on them. ... We ask, are you hungry? Do you have food?” She says the janitors watch who is coming and going on campus and what needs fixing. “All these things—we’re not just there to clean, we do so much more.”