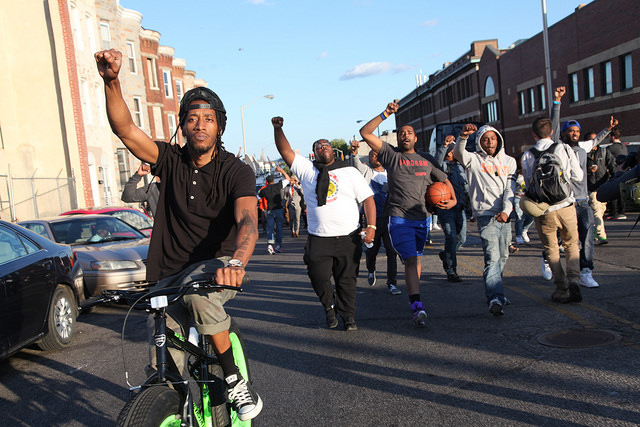 The city's unions say that neighborhoods suffering from extreme divestment, like the one Gray was from, need jobs. (Arash Azzizada / Flickr)

With the city's nightly curfew cancelled and some 4,000 National Guard troops and extra police beginning to withdraw in the wake of the protests and riots that marked the the death of Freddie Gray, Baltimore appears to be returning to normal. But “normal” in Baltimore is part of the problem for workers and low-income residents, according to labor and community leaders, and now is a good time to address some of the economic issues underlying the unrest that brought national and international attention to the city over the last two weeks.

“Now that the charges are out” against police officers accused of criminality in the death of 25-year-old Freddie Gray, the conversation should turn to “the lack of good jobs” for young African-Americans like Gray, says Jermaine Jones, business manager for Laborers International Union Local 710.

The filing of criminal charges against six Baltimore Police Department officers May 1 has quieted protests against aggressive policing of African-American neighborhoods, he says, but action is still necessary to alleviate the chronic unemployment and poverty in those areas. Jones and others spoke out on this theme May 4 at a press conference for the group One Baltimore United, a coalition of community, faith and labor organizations.

The city’s elected leaders, especially Mayor Stephanie Rawlings-Blake, are guilty of ignoring the desperate need for decent job opportunities in the city’s low-income neighborhoods, Jones says, and should adjust laws and regulations to encourage more local hiring, particularly on construction projects that get public funding or special tax breaks. “There is a lot more that could be done,” to promote, or require, local hiring, according to Jones.

The Laborers union has joined with some of the most prominent labor organizations in the city to back the One Baltimore coalition. Formed late last year, the group includes local and regional AFL-CIO bodies, 1199SEIU heath care workers union, UNITE HERE Local 7, American Federation of State, County and Municipal Employees (AFSCME), Amalgamated Transit Union Local 1300 and the City Union of Baltimore (affiliated with the American Federation of Teachers). The unions joined with NAACP, Casa de Maryland, Maryland Working Families, United Workers, and other community and faith-based groups to form the nucleus of the coalition.

The coalition seeks to create an alternative to the trickle-down model through community organizing aimed at massive investment in affordable housing and job creation, Todd Cherkis, a spokesperson for United Workers, explains. Different labor and faith groups have been advocating around these issues for years, he notes, but One Baltimore is “intended to get the disparate groups working in tandem as a response to worsening conditions in the city."

Cherkis tells In These Times that the issues of job opportunity and improved housing are closely related. “We estimate that there are 40,000 vacant housing units in the city,” many of which are abandoned buildings now controlled by municipal agencies, he says. Rehabilitation of these housing units could create thousands of jobs and also alleviate the shortage of low-income housing.

“Our city leaders rely on a trickle-down approach. The idea is that the marketplace will take care of our problems. Well, that’s just not working out,” Cherkis says.

Also speaking at the May 4 press conference was Latisha Lyles, a Starbucks employee and union activist with UNITE HERE Local 7. Referring to the numerous peaceful protests in Baltimore, she stated: “This is the first time I’ve seen Baltimore come together to stand up for the right things. It gives me hope. … We need good jobs, good schools and opportunities for ourselves and our kids.”

Prominent in showing support for Justice for Freddie Gray campaign has been 1199SEIU’s Maryland-D.C. Region, whose local members are largely African-American hospital workers. The union even organized a clean-up crew to sweep up broken glass and other debris in the riot-stricken neighborhood of Sandtown-Winchester.

Echoing the criticism of elected city leaders by Jones and Cherkis is Charly Carter, Executive Director of Maryland Working Families, a labor-backed group with a growing involvement in electoral politics. Criticism of Mayor Rawlings-Blake for her handling of the rioting has been heard well outside of Baltimore, she says, but has been especially sharp at home.

“There’s a sense that there is blood in the water” as far as Rawlings-Blake’s political future is concerned, she says. Political maneuvering is already underway ahead of the 2016 mayoral election, says Carter, and Maryland Working Families intends to be active in promoting pro-worker policies as the electioneering plays out.

The One Baltimore coalition was formed last year, she tells In These Times, not as a political organization to promote particular candidates, but more from a sense that current neoliberal economic policies of the city government are failing. For example, the group made its public debut late last year in a protest against rumored plans to privatize the city’s water system.

For the Laborers’ Jones, the need for action is immediate. The union has trained several hundred city residents in its pre-apprenticeship program, he said, and “we want a commitment from the city” to help find jobs for those workers. Existing regulations offer gaping loopholes for real-estate developers to bring in employees from outside the region, he says, and these loopholes can be closed. Labor unions stand ready to do their part in helping Baltimore recover, he says, but they need a commitment from city officials to do likewise.