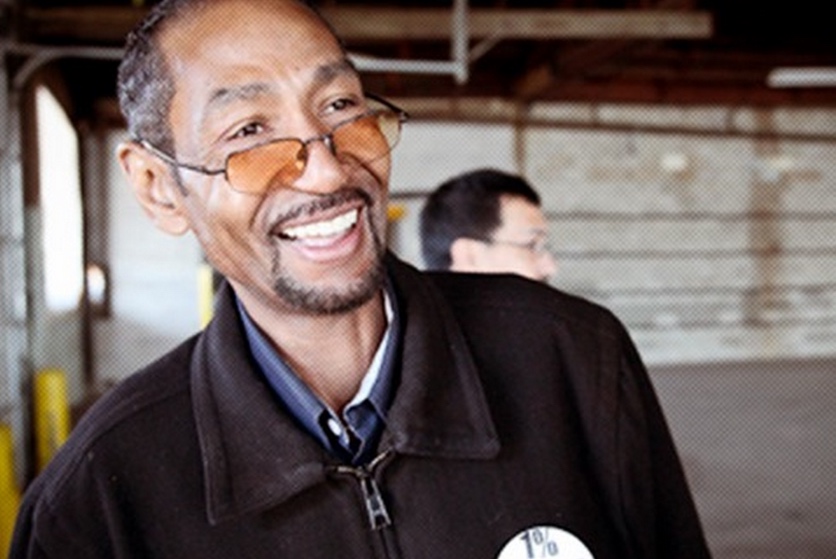 “If you don’t fight, you’ve already lost,” Maclin often told workers. “But if you do fight, you can win.” (Brendan Martin / The Working World)

Melvin “Ricky” Maurice Maclin, Vice President of United Electrical Workers Local 1110, leader of the historic six-day factory occupation of Republic Windows and Doors in December 2008 and founding member of New Era Windows Cooperative, died on May 5, after being diagnosed with stage four pancreatic cancer in early April. He was 61 years old and died surrounded by family in his Chicago home. The steady stream of visitors was a testament to the impact he had on so many lives and our movement for justice.

“This is a huge loss for me and for our movement,” said his good friend, Local 1110 President Armando Robles, who was also a leader in the Republic occupation. “He leaves a huge hole in our lives. He was a great friend and a brother in struggle.”

Ricky was born on March 2, 1954, and spent his early years in Haywood County, Tennessee, on his grandparents’ farm, where they grew cotton and raised cows, chickens and pigs. He lived with his grandparents, with whom he was very close, his mother and stepfather, and his younger sister Brenda. His Aunt Helen, his mother’s sister, described Ricky as “a fast learner and very smart. He caught on to anything he wanted to.” While his given name is Melvin Maurice, his mother took to calling him Ricky because she was fond of that name and it stuck (though the family nickname “Gigi Pig Squeak" did not). His cousin May Carolyn Reed said, “Ricky was a real charmer. We called him ‘Pretty Ricky,’ like the singer.”

His parents moved Ricky and his sister to Chicago when Ricky finished elementary school.  He attended CVS High School in Chicago. After graduation, Ricky entered into what family members called the “street life,” but eventually became religious and turned his life around.

Ricky worked for many years in the restaurant industry before landing a job at Republic Windows and Doors in 2002. A few years later, he met Cynthia and married her. She recalled how “I had decided I didn’t want to get married. But an elderly lady who Ricky helped take care of set us up on a blind date. She called me and said I just had to meet this very nice man. From the moment we met nine years ago, we were inseparable.”

Republic Windows and Doors workers organized into UE Local 1110 in 2004 and Ricky became a shop steward. In 2007, he was elected vice president of the local. He helped lead the successful worker occupation of the Republic factory in 2008, challenging Bank of America to take responsibility after the bank received a $25 billion federal government bailout during that year’s Wall Street crisis, and then cut off credit to credit to the window factory, wiping out jobs. The UE members’ courageous action received massive national and international media attention, making them working-class heroes at a time of so much villainous action by the 1 percent, and the occupation ended when they won the back pay to which they were entitled. It also led to the plant reopening under a new owner, Serious Energy, and with the UE contract intact.

In early 2009, Ricky participated in the Republic Workers Victory Tour, speaking in several cities around the country to encourage other workers to take bold action to defend their rights. He loved to tell other workers, “If you don’t fight, you’ve already lost. But if you do fight, you can win.”

In 2012, Maclin helped lead a second worker occupation of the window factory, when Serious Energy decided to close the plant with little notice. Out of that occupation came the idea of workers buying the company and starting a worker-owned cooperative, and a commitment by Serious to sell them the equipment they needed to make that happen. Ricky was one of three of the original team that began the process of founding, with help from The Working World, what is now New Era Windows Cooperative.

During the first plant occupation, Maclin frequently spoke to the news media on behalf of his fellow workers. Capitalism: A Love Story, Michael Moore’s 2009 documentary about the financial crisis and the injustice of the economic system, highlighted the Republic workers’ action as one of the few stories with a happy ending, and Ricky Maclin is featured. He’s also shown and quoted extensively in Workers’ Republic, Andrew Friend’s excellent documentary film on the occupation, and in UE’s own short video about the Republic struggle produced by Andrew Dinkelaker.

UE General President Bruce Klipple said, “Ricky Maclin was amazing. What he and his fellow workers in Local 1110 did is unbelievable, and made a huge contribution to this union, the entire labor movement and the working people of this country.”

“Ricky was one of the most inspirational rank and file leaders I have ever met,” says Carl Rosen, UE Western Region president. “He had a knack with coming up with the most perceptive comment for any situation and saying it with a very disarming smile. And he always knew which side he was on. UE and the whole labor movement have lost a great leader.”

Ricky Maclin is survived by his wife Cynthia Maclin; three stepchildren, 14 grandchildren and three great-grandchildren; his sister’s two kids and 10 great-nieces and -nephews; and his cousin Shannon, who he considered a little sister. He will be remembered by all who love justice and struggle to build a fair and kinder world.

Leah Fried is an organizer for the United Electrical, Radio and Machine Workers.