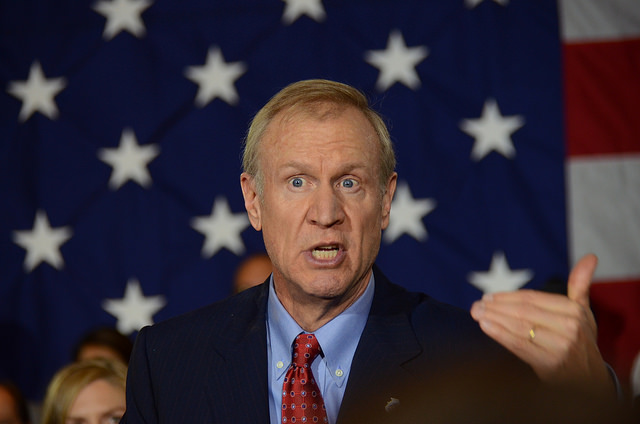 Bruce Rauner, the new Republican governor of Illinois, has been learning this week that it’s harder to impose a right-wing, pro-business agenda on a big state government than it is to overhaul a corporation after a hostile takeover—the work that yielded him nearly a billion dollars as a private equity investor before getting into politics.

It’s harder yet when it’s a heavily industrial state with union members who still turn out for protests, even in small towns, and where even the moderate Democrats controlling the state legislature can unite in opposition to Republican initiatives—whether for the benefit of their constituents or to simply exercise partisan power.

The 118-member House of Representatives delivered an embarrassing rebuke to Rauner on Thursday with an overwhelming defeat in of one of his top priorities, a right-to-work law, by a margin of 0 in favor, 72 opposed and 37 voting present (as Rauner requested, with one Republican amid the 72 opposed and other Republicans leaving to avoid any vote). What made the vote even more unusual is that the right-to-work proposal was introduced by the Democratic House Majority Leader Michael Madigan, not Rauner.

Rauner charged into office with an ambitious “turnaround plan” for the state of Illinois that included a grab-bag of right-wing policy treats for the wealthy and powerful, such as right-to-work legislation, which prohibits any legal requirement that workers pay for services that a union at their workplace is legally compelled to offer them; cutbacks in workers compensation; “tort reform,” making it more difficult for those suffering injuries to sue negligent and irresponsible companies; and reduced unemployment compensation.

Recognizing his limits with the Democrats in control of the state’s General Assembly, Rauner started his campaign by encouraging local city councils and other small legislative bodies to vote in favor of his turnaround agenda both to win piecemeal implementation. Contrary to prevailing legal opinions, Rauner believed that jurisdictions smaller than a state could enact right-to-work legislation on their own.  In any case, he hoped the votes would build a sense of political momentum in favor of his turnaround plan.

Some legislative bodies in small towns, rural areas or even conservative moderate-sized downstate cities like Rockford did adopt Rauner’s plan, but according to tallies that political journalist Rich Miller published in the first week of May, less than 7 percent of the population of the state was represented by cities, counties or townships that voted in favor of Rauner’s turnaround. In many of these small legislative bodies, relatively large numbers of local union members and other grassroots activists turned out in protest at the meetings, effectively thwarting the strategy.

By some accounts, Rauner offered a budget that addressed the anticipated large deficit solely through cuts in programs that many Democrats consider essential and intended to bargain with the Democrats to accept some or all of his turnaround agenda in exchange for revenue increases that could save some of the most popular programs.

Madigan’s pre-emptive strike of introducing and rejecting right to work, which he may follow next week with votes on versions of Rauner’s other turnaround goals, may help to undermine the Rauner bargaining strategy. But the battle over the budget and new revenue for essential programs will not disappear.