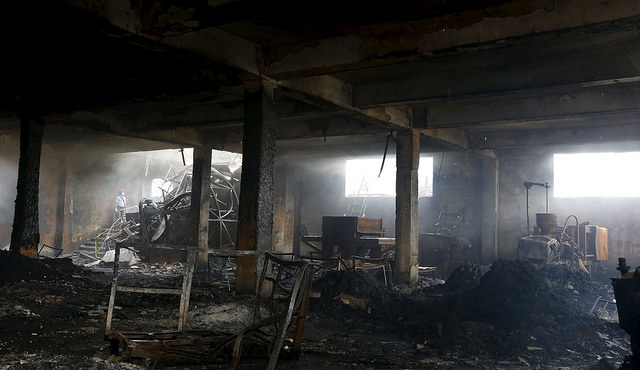 On Wednesday, 72 employees were killed and many were left injured in a large industrial fire in the Philippines. The Kentex Manufacturing Corporation, a footwear manufacturing plant in Valenzuela, started on fire when welders were working on the metal front gate of the building. The fire was sparked when chemicals used in the production of rubber slippers were ignited near the gate and grew quickly due to the abundance of flammable material inside of the building.

“The situation happened very fast,” said the city spokesman, Rhay R. Sousa, according to New York Times reporter Floyd Whaley. “Some people had to jump from the building to escape.”

Many of the workers were trapped on the second floor, and the intensity of the heat made it difficult and dangerous for firefighters to rescue workers. Due to the ferocity of the blaze, the recovered remains were unrecognizable. Family members are working with officials to determine distinguishing features that will help to identify the bodies.

On May 14, the country’s Department of Labor and Employment (DOLE) issued a statement assuring family members that they would be launching an investigation in order to ensure accountability and press charges for the incident. DOLE will also be providing families with compensation for funeral expenses and medical care.

In a press release posted on the DOLE website on May 15, however, Secretary Rosalind Dimapilis-Baldoz admitted that Kentex had been guilty of misconduct within the DOLE labor codes: “The company has engaged, and is engaging, the services of an illegal subcontractor, a violation of the Labor Code, and therefore, it is responsible for the subcontractor’s workers.”

At the time of the fire, 104 of the workers in the plant were subcontracted by Kentex through CJC Manpower Services. Because CJC Manpower Services was not a registered subcontractor through DOLE, it was illegal for Kentex to use their employees, even if they were Filipino and trained to work in the footwear factory. Kentex gave the DOLE a list of these workers in order to compare the names to the list of missing persons and found that 36 of the missing persons were subcontracted through CJC.

While the management of Kentex and CJC Manpower Services are summoned to a conference with DOLE on Monday, enraged members of BAYAN, a nationalist and democratic Filipino alliance, took to the streets of the capital city of Manila on Thursday to protest the negligence of safety standards.

The neglect of worker safety within garment factories is clearly widespread in the Global South. In 2013, the Rana Plaza garment factory collapse in Bangladesh killed 1,129 workers. Authorities ignored employees when they reported that there was a crack in the foundation of the factory and were told that they were “to report to work anyway or risk losing a month’s wages.”