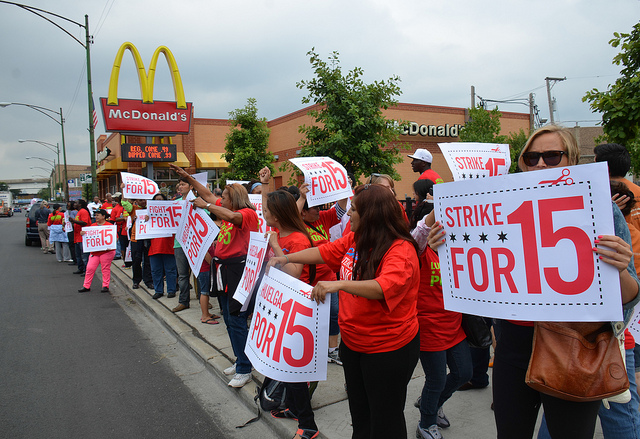 For the second year in a row, fast food workers and supporters will descend on the meeting. (Steve Rhodes / Flickr)

When McDonald’s stockholders meet on the leafy corporate campus in suburban Chicago today and tomorrow, thousands of protestors will be ready to greet them, according to organizers of the fast-growing Fight for $15 movement. Last year, in the first such confrontation, a few hundred people marched on and then blocked roads leading on to the company property before police arrested them.

The anticipated jump in numbers reflects the growth of the movement and the expansion of the strategy during this past year.

The movement has stirred up interest among workers far beyond fast foods, including student workers,  adjunct teachers and retail workers. The number of people taking part in the national protests/strikes have grown as well.

But at the same time, the movement has focused very intently on one company, McDonald’s, since it is the biggest fast-food franchise company in the world and helps set global patterns. If the movement, primarily funded and initiated by the Service Employees International Union (SEIU), can win victories with the industry leader, it may be somewhat easier to win the same changes at other companies.

Also, the close attention has allowed Fight for $15 to research McDonald’s more thoroughly to find new vulnerable points for attack, new methods of bringing pressure and new allies. For example, SEIU, which has for several years worked hard to build up global labor a connections, has reportedly been able to rely on these unions in Europe to help provide information that led to charges against McDonald’s that it had illegally avoided taxes. (European unions have legal standing to take action against and gain information from McDonald's that non-union American workers lack.) And in Brazil, unions have sued the multinational for driving down standards for workers.

In the United States, the biggest protests so far came on April 15, when strikers and supporters told taxpayers how they had to rely on tax-funded programs to survive because McDonald’s did not pay enough—potentially tapping into a big base of allies to force the company to pay living wages. But the protests also focused on abuse of workers, including exposure to health and safety risks, racial discrimination and violations of wage and hour laws. The movement’s attention to those issues helped to make the case that workers needed not only the increased pay but also a voice—through a union—to demand safety and respect on the job.

The movement’s charges have also raised legal questions about whether McDonald’s corporation is actually a joint employer with franchisees, since it dictates so many conditions at work. Such a decision, for example, in widespread complaints now before regional branches of the National Labor Relations Board, would make the corporation liable for damages along with franchisees and require them to deal with workers over resolution of problems.

Industry observers have criticized McDonald’s management and weak market performance in recent years, and the company has appointed a new CEO. But the corporate board and managers have responded to its problems not by improving products or service but by spending over $30 billion during the past decade buying back its stock. By artificially inflating the stock’s value, top managers provided short-term benefits to shareholders, including executives and directors, but have short-changed both workers and franchisees—and have most likely harmed the company in the long term.

In one unusual alliance, SEIU has offered support to many franchise operators who claim they have been mistreated by McDonald’s. The union filed a complaint with the Federal Trade Commission, which is responsible for overseeing the franchise businesses, about an imbalance of power at McDonald’s that harms both workers and their immediate bosses, the employees. While the franchise operators do not agree with everything that Fight for $15 advocates, the union’s willingness to help with legitimate franchisee grievances helps to separate some franchisees from their potential natural alliance with the corporation and instead open up the possibility of an even broader alliance with the workers in the industry.

Likewise the campaign as a whole has greatly raised expectations about what the minimum wage should be, prompting even the fairly conservative Democratic governor of New York, Andrew Cuomo, to appoint a wage board that is quite likely to set a minimum wage for the state’s food industry around $15 an hour within the next three months. Progressive New York City Democratic Mayor Bill de Blasio is waiting in the wings to set the mark as high or higher.

And the Los Angeles City Council joined the ranks of U.S. cities tackling poverty wages and spiraling income inequality through adoption of strong local minimum wages. By a vote of 14 to 1, the council directed L.A.’s city attorney to prepare legislation setting a $15 wage floor. The new rate will be phased in over several years, reaching $15 in 2020 for large businesses and in 2021 for smaller businesses and certain non-profits, and providing for future adjustments to be pegged to increases in the cost of living.

Unfortunately, there is no clear road to unionization of these workers despite the scale, militancy and cleverness of their action, and in both the short and long run, having a union is essential for the success of the workers and their campaign. At a time when the Supreme Court may undermine existing unions by denying them the right to collect “fair share” payments from non-members, the success of actual organizing of a union by the Fight for $15 movement may prove crucial for establishing a more favorable public environment for workers to form—and keep—unions.