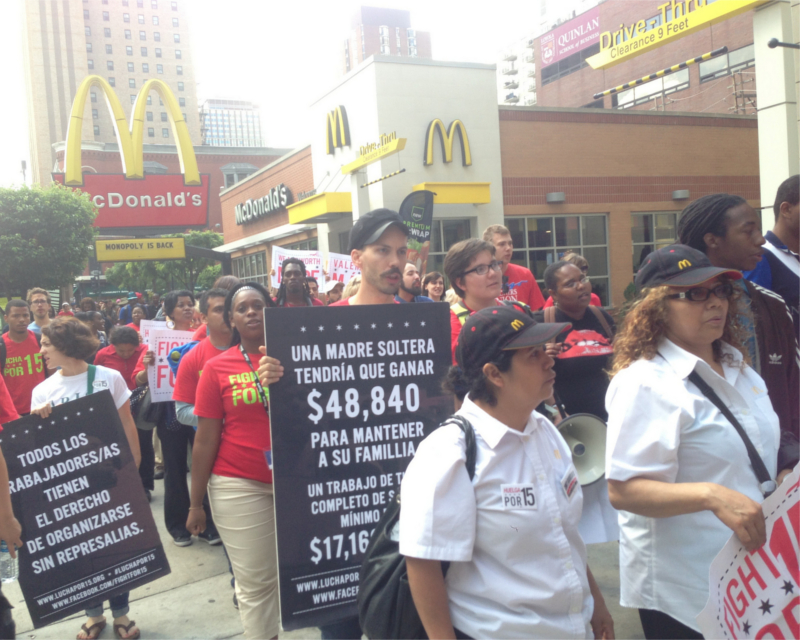 The $15 target has moved quickly from a utopian ideal to a credible option in mainstream American politics. (Steve Rhodes / Flickr)

The men and women who, in the words of McDonald’s founder Ray Kroc, “grind out” the burgers and fries that have made the company with the familiar golden arches the second largest private employer in the world dramatically displayed their discontent on Wednesday, returning again early Thursday as shareholders arrived in suburban Chicago for the company’s annual meeting.

Over the last two years, the focus of their “Fight for $15 and a union” movement has stayed constant.  They want to be paid a living wage, not just a wage at or slightly above a legal minimum wage with steadily shrinking purchasing power. Their goal of $15 an hour has invigorated a broader movement that at this point mainly has boosted wages for everyone in a growing number of cities, most recently Los Angeles.

They also want to be able to form a union without interference by their employer (whether it’s just McDonald’s, which owns and operates about 20 percent of the stores in the U.S., or the corporation in joint control with the franchisees who own 80 percent of their outlets). As the $15 target has moved quickly from seeming utopian to being credible in the mainstream of American politics, the movement—with major backing from the Service Employees International Union (SEIU)—seems to be ratcheting up the emphasis on union rights, not only higher pay, as essential.

Organizers said that there were 5,000 workers (and supporters) marching on Thursday outside the company’s headquarters in suburban Oak Brook, naturally enough located on McDonald’s Drive. They marched to the headquarters behind a banner (“$15 and union rights, not food stamps”) and a statue of young woman with her fist raised in the air, the magic number 15, and the words “fight” and “lucha.” The food stamp embellishment reflects the new political sophistication of the movement: it reminds the public that McDonald’s and other low-wage employers shift many costs of their employees to public, tax-financed programs, rather than making it possible for workers to support themselves.

At a rally heavy with religious inspiration and ties through song and story to the civil rights movement, there were signs of the expanding ambitions of the movement. For example, SEIU president Mary Kay Henry twice insisted that it was time for McDonald’s leaders to negotiate with the movement.

Under management’s current plans, the company would continue to have the value of their stock artificially elevated by the planned continuation of a stock buy-back program—a program that diverted $30 billion over the past decade into shareholders’ accounts rather than workers’ wages or investment for the company’s future. Not only the Fight for 15 but also fiduciary officials of four major pension funds have this week criticized the stock buy-back practice, and McDonald’s in particular, for ignoring long-term strategy in favor of enriching executives and shareholders now.

University of Massachusetts-Lowell economics professor William Lazonick, a critic of the widespread abuse of buybacks, argues that the practice is a cause and symptom of a profoundly destructive trend in the American economy over the past few decades. Major U.S. companies have shifted from a “retain-and-reinvest” model, that is, putting their earnings into the company’s development and the workers’ incomes to create a “sustainable prosperity.”

But by the late 1970s, he wrote in last September’s Harvard Business Review, companies had shifted to a regime of “downsize-and-distribute,” that is, cutting costs and distributing the freed cash to “financial interests, particularly shareholders.”  “By favoring value extraction over value creation, this approach has contributed to employment instability and income inequality.”

Beyond providing another stick with which the movement can beat McDonald’s, the attack on its corporate strategy represents a subtle shift in the Fight for 15 appeal to the public. Initially, the argument was that workers, who relied on their pay for family incomes, not “pin money,” couldn’t survive on the fast food industry’s low pay. That argument won over most of the 1.4 million people signing petitions in support of higher pay for workers and a union that Fight for 15 submitted on Thursday to the shareholder’s meeting.

Important as that argument remains, there has been a subtle shift to an inversion of a famous bit of American business folklore. “Engine Charlie” Wilson, Secretary of Defense for Eisenhower after spending the 1940s and early ‘50s as General Motors CEO, supposedly said that he thought what was good for GM was good for the country. (It was more like what’s good for one is good for the other and vice versa.)

Now the Fight for 15 is essentially arguing that what’s good for McDonald’s workers is good for the country—and it’s an argument that makes sense. Inequality and persistent poverty remain two of the country’s biggest problems. Increasing the density of union representation and raising wages for the lowest-wage workers are both key to reducing both inequality and poverty. Also, the economy has grown much more slowly than needed to pull out of the Great Recession: stronger consumer buying power (especially among those likely to spend all they earn) would make the Federal Reserve efforts at stimulating the economy more effective.

Rev. William Barber, the North Carolina leader of the "Moral Monday" marches and the state NAACP chapter, pushed the argument farther. “It’s a Constitutional issue, an American issue,” he told the marchers—necessary to form a more perfect union, establish justice, insure domestic tranquility and promote the general welfare. But it also constitutes an attack on “systematic racial injustice,” he said, denouncing wages below what’s required for a decent living “a pseudo-form of slavery in the 21st century.” With people of color representing 32 percent of the workforce but 42 percent of those working at minimum wage jobs, Barber says, raising the wages of the lowest paid strikes at racial inequity as well.

Ultimately, Barber said, “when you raise up the lowest wages, it helps all of us recover our sanity, for all workers to have their dignity, and the world is better for everybody.”

In just two years, the Fight for 15 has become a movement not just for a living wage and a union but for justice, decency, democracy, racial and ethnic fairness, equality and the abolition of poverty. As it well should be.