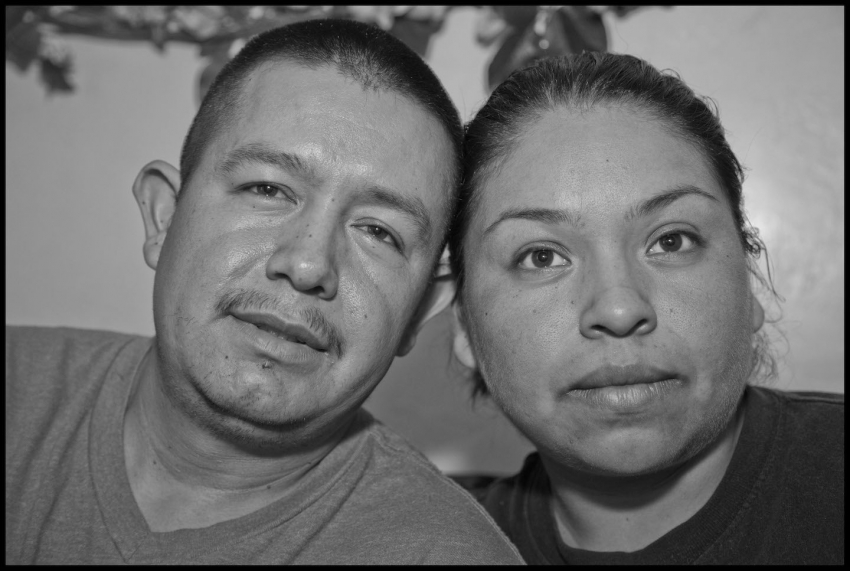 Severiano Salas and Amadalia Patino are two workers who were fired from their jobs as grape pickers for Gerawan Farms. (David Bacon)

On May 18 in Fresno, California, the state's Court of Appeals for the 5th District ruled that a key provision of the state's unique labor law for field workers is unconstitutional. Should it be upheld by the state's supreme court, this decision will profoundly affect the ability of California farm workers to gain union contracts.

At issue is the “mandatory mediation” provision of the state's Agricultural Labor Relations Act. Using this section of the law, workers can vote for a union, and then call in a mediator if their employer refuses to negotiate a first-time contract. The mediator, chosen by the state, hears from both the union and the grower, and writes a report recommending a settlement. Once the Agricultural Labor Relations Board (ALRB) adopts the report, it becomes a binding union contract.

Associate Justice Stephen Kane, in a 3-0 ruling, said the law illegally delegates authority to the mediator. The Fresno district of the appeals court is well known for its conservative bent. United Farm Workers National Vice President Armando Elenes immediately announced that the union would appeal the decision to the state Supreme Court.

The case has attracted the attention and support of some of the country's most powerful conservative and anti-union organizations. Some have intervened to file briefs challenging the law. Others have joined with the grower in this case, Gerawan Farms, in an elaborate campaign to remove the United Farm Workers as the bargaining representative for the company's workers.

Workers say they already feel the impact of the challenge to the law. According to Ana Garcia Aparicio, "At this company, we’ve had many issues and injustices. This is the reason it is so important for us that our contract be implemented."

Gerawan Farm's 5,000 workers pick peaches and grapes in the Fresno region of California's San Joaquin Valley, one of the most productive agricultural regions in the world. The grape harvest takes place during the summer, when temperatures in the fields normally rise to over 100 degrees every day. To pick peaches, workers have to carry tall aluminum ladders through the trees, along with the heavy buckets of fruit.

One worker, Inez Garcia, says that not only is field work physically exhausting, "but that the worst part was that the men two rows away from me were picking at $11.00 dollars an hour, while I was doing the same work and getting paid $9.00 dollars an hour."

Another worker, Guadalupe Martinez, says she was threatened after criticizing a supervisor for making it hard for her to get to the drinking water, a crucial issue during the summer heat. "Now," she worries, "I am afraid that for next season I will not be recalled to work since she is accustomed to doing what she wants with her crew."

A mediator recommended a union agreement at Gerawan, using California's mandatory mediation law. It dictates equal wages for the same job, and prohibits discrimination. It also mandates a system for recalling workers each harvest season that bars favoritism or retaliation. Gerawan Farms workers, however, are still waiting for the courts to mandate implementation of this contract.

Workers here are trying to overcome the impact of their exclusion from the National Labor Relations Act, passed in 1935. Outside of California, no state has a law giving farmworkers a legal process for union recognition and bargaining. Union agreements do exist in the fields elsewhere, but they've been won only after years-long campaigns and boycotts. As a result, just over one percent of the nation’s farmworkers are covered by union agreements. Wages and conditions in farm labor are worse than in almost any other occupation.

In the absence of Federal law, however, California has been able to use state legislation to address grower intransigence. The original Agricultural Labor Relations Act (ALRA) was passed in 1975 and signed into law by Governor Jerry Brown in his first term. That law gave farm workers, for the first time, a legal process in which they could vote for a union and made it illegal for a grower to retaliate against workers for exercising their right to organize. The law, however, gave no teeth to the ALRB to actually force growers to negotiate and sign contracts.

As a result, workers could vote for the union, but had great difficulty negotiating contracts afterwards.  According to Philip Martin, Professor of Agricultural and Resource Economics at the University of California in Davis, workers were unable to win agreements in 253 of 428 farms where they'd voted for the United Farm Workers between 1975, when the ALRA went into effect, and 2002.

That year, then-Governor Gray Davis signed two bills that set up the mandatory mediation process. Growers predictably challenged the law but finally lost in another district of the state Court of Appeals in 2006. Judge Kane and the Fresno court are trying to undo this earlier decision.

After 2006, the UFW successfully used the new law at several large employers, negotiating agreements covering about 3,000 workers. In 2013, the UFW implemented the law again, this time at Gerawan Farms.

The UFW won an election among Gerawan's workers in 1992, when the grower employed about 1,000 peach and grape pickers. Company opposition was intense, and one worker, Jose Gonzalez, recalls that, "The company had houses for workers then and tore them down when they knew we were talking about the union." The ALRB leveled multiple charges of retaliation against Gerawan as a result.

The company unsuccessfully appealed the union election victory, and finally in 1995 Mike Gerawan, one of the company's owners, sat down with the union. He declared, however, "I don't want the union and I don't need the union." That ended bargaining.

The union says it maintained contact with the workers in the years that followed, but had no way to force management to negotiate until mandatory mediation was passed and upheld. By then, Gerawan had grown much larger, employing 5,000 farm workers. Judge Kane, in his decision, nevertheless accepted the company's argument that the UFW had "abandoned" the workers.

Once the union renewed its bargaining request in 2013, and then called for the mediator, the company unleashed a campaign to decertify it.  According to a complaint later issued by the ALRB, Gerawan sought "to prevent the UFW from ever representing its employees under a collective bargaining agreement."

Two petitions, one featuring forged signatures, were circulated, often by foremen, calling for an election to decertify the UFW. Supervisors organized rallies in front of ALRB offices to pressure it into holding a vote. According to Gonzalez, "When they passed around the decertification petitions, they looked at the crews who didn't sign them. Then those crews didn't have any more work." Severino Salas, another worker, says simply, "People were afraid to support the union, even though they wanted it, for fear of losing their jobs."

Despite charges by its own investigators that the company was manipulating the process, the ALRB finally gave way in November of 2013 and held an election. The ballots were all impounded, and have yet to be counted pending the resolution of multiple legal cases against the company. A Gerawan statement claims, "We support [workers'] right to choose, but the ALRB staff and the UFW do not. Our sole message to our employees has never wavered: ‘We want what you want.’"

The company campaign got the support of conservative groups nationally. The Center for Constitutional Jurisprudence, a far-right legal institute, filed briefs at the appeals court together with grower associations. In recent years the Center has joined the Harris v. Quinn suit against the Service Employees International Union in Illinois, in which the U.S. Supreme Court undermined the ability of unions to collect agency fees from non-members. It has argued for Hobby Lobby Stores against birth control, and supported the initiative to end affirmative action in Michigan.

Another Gerawan supporter is the Center for Worker Freedom, which organized and financed demonstrations against the labor board. The center was set up by Grover Norquist's Americans for Tax Reform, allegedly with money from the Koch brothers. The center's director, Matt Patterson, first achieved notoriety when he managed the campaign against the United Auto Workers two years ago, at the new Volkswagen plant in Chattanooga, Tennessee. Employing a similar strategy, the Center bought billboards in Sacramento attacking the UFW and the ALRB.

California growers and these conservative organizations clearly view mandatory mediation not as a local issue, but a national one. The law could be extended to other states, and the campaign's goal is to kill it before it spreads. If the Fresno appeals court decision is upheld, the passage of laws mandating enforceable union rights for farm workers in other states becomes much less likely.