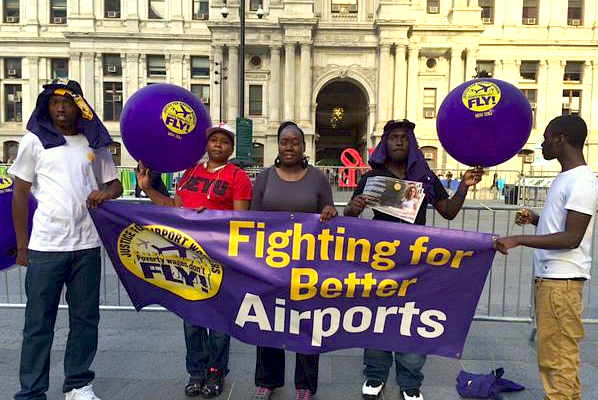 After over a year of worker strikes and solidarity from a labor and faith coalition, Philadelphia International Airport contracted workers received assurance that they can form a union without retaliation and will be paid a $12 minimum wage­­—up from rates as low as $7.25 per hour plus tips. This is a major victory for contracted workers across the country whose bosses and workplaces regularly take advantage of indirect employment arrangements to avoid responsibility for workers’ rights and conditions.

Airports and airlines across the country often use contractors to hire baggage handlers, aircraft cleaners and wheelchair assistants. At Philadelphia’s airport, around 2,000 staff members work for contractors. Because contractors in all industries commonly label their employees as part-time or temporary workers, those workers often don’t receive benefits like healthcare coverage or paid sick leave. Workers directly employed by their workplace are more likely to receive benefits and be union members.

The Philadelphia airport workers had two main concerns: low pay and management retaliation for organizing. To address the issue of wages, activists garnered enough support to place a referendum on the May 2014 ballot for state and local elections. Philadelphians were asked if they wanted to expand the city’s $12 minimum wage to workers hired by contractors at city-subsidized projects. The referendum overwhelmingly passed and would be enacted in January 2015.

However, at a rally earlier this month, City Councilwomen Maria Quiñones-Sanchez said PrimeFlight Aviation Services, a contractor that serves over 40 airports across the country, had yet to implement the $12 an hour wage. The Philadelphia Inquirer’s Linda Lloyd says this was because the contractor was operating under the pre-referendum lease.

As to worker retaliation, last year Misha Williams said she was fired from her position as a wheelchair assistant for speaking out about workplace conditions. Just last month, another worker, Sarina Santos, a baggage handler and mother of four, was also fired. PrimeFlight says the termination was due to attendance issues, but Santos claims she was fired for her workplace activism. News outlets report that PrimeFlight has consistently declined to comment on these allegations against them.

The previous lease between the city-operated airport and its airlines was set to expire in July. Activists sought to include the city-mandated raise and worker protections within the new agreement. Philadelphia’s City Council, which must approve of the lease, passed a bill in November that said the future contract must include those demands. Airport director James Tyrrell spoke against the bill, saying it would lead to an increase in airport costs. American Airlines, the largest airline at the airport, was worried the bill would set a precedent for other airports across the country.

Two weeks ago, the airport and its airlines finally signed the new lease. It includes a “labor harmony” provision that says the $12 minimum wage will go into effect on July 1st and that the airlines will not oppose union organizing efforts from contracted workers. The 22 airlines also agreed “to send letters to their contractors, pledging not to terminate agreements with any contractors if their employees elect to organize.”

Michael Minerva, American Airlines’ vice president of government and airport affairs, explained that the airlines “worked with both the city and the SEIU to come up with provisions that we could all live with and be happy with." Vice President of Local 32BJ Gabriel Morgan said the agreement “is a great deal for our union, and for workers at the airport.”

At a rally in support of the airport workers earlier this month, Reverend Gregory Holston, co-chairman of interfaith group Philadelphians Organized to Witness, Empower & Rebuild (POWER), noted that in September, Pope Francis will be flying into Philadelphia for the World Meeting of Families. Alluding to His Holiness’s support for the poor and working class, he said Pope Francis shouldn’t have to visit an airport where employees are struggling to get by. "Before the Pope comes, let the change come," he said. It looks like Holston’s prayers have been answered.