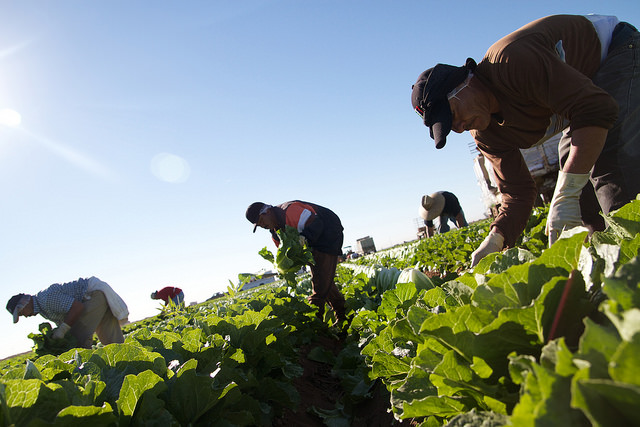 Farmworkers in Baja California, Mexico earned $7 to $8 per day—not hour—before the historic strike, making it even more difficult to walk off the job and forgo what little wages they earned. (Peter Haden / Flickr)

A historic farmworker uprising ignited this March in Baja California, Mexico. Thousands of crop pickers stopped work at peak harvest in the valley of San Quintin, a major source of the U.S.’s tomatoes, cucumbers and berries, demanding better pay, legally mandated benefits and an end to sexual harassment in the fields, among other improvements. The months-long movement received surprisingly little media attention on this side of the border—even though, according to a new documentary by Al Jazeera America, it is the first strike of this scale in Mexico in over a decade.

The short documentary, “Invisible Hands,” offers some of the first footage for U.S. audiences of the front lines of the uprising. It shows police crouching behind barriers to shoot rubber bullets at protestors; it shows hundreds of workers crowded outside negotiations with growers and government representatives in nighttime darkness, their backs turned to the police; most important, it shows what the men and women behind the protests endure to get produce to U.S. grocery stores.

Host Josh Rushing says, “It’s hard to understand how they could get by on the wages they’re paid here,” which were $7 to $8 per day—not hour—when the protests began. The workers interviewed in the documentary do barely get by. Ana, a raspberry picker who started working in the fields at age 12, now has children of her own to take care of. Even though she works at least six days a week, sunup to sundown, food is scarce. Her family can’t afford meat and often forgoes cereal, milk and cheese. “We only buy eggs, soup, rice, beans, the cheapest oil there is,” she says. They have no refrigerator—they can’t afford the electricity.

The workers’ poverty puts them in a weak bargaining position and makes walking off the job even more difficult. While the companies face lost profits, the workers face hunger. How long they can hold out without pay? “Invisible Hands” shows how the protestors’ militancy cannot keep their demands from plunging: they first demand almost $20 a day; the growers counteroffer with a raise of only about 50 cents. The workers return with a much lower proposal of $13 a day. But even that is too much for the growers. The protests all but ended this month with a mixed victory for the pickers: They have been promised government-required benefits and between $9.50 and $11.50 a day, depending on where they work—far less than they had originally demanded.

The documentary focuses almost exclusively on the wage struggles of the San Quintin workers, but hints of other battles within the strike pop up throughout. At a checkpoint where workers raise money to be able to continue striking, a woman holds up a sign reading “No more sexual harassment against women workers.” Ana is seen working long, meagerly paid days, highlighting the lack of overtime pay the pickers are also fighting against.

If these all seem like problems for Mexican growers to solve, “Invisible Hands” implicates the U.S. in the workers’ destitution. It is the newest episode in Al Jazeera America’s series “Fault Lines,” which explores the United States’s economic and political role in the world. In this case, U.S. companies’ role is to exert downward pressure on the wages and working conditions of the people “at the bottom of our food system,” as Rushing says.

Fernando Rodriguez, the CEO of Los Pinos, a major exporter of tomatoes, says paying workers more than the minor increases the growers offered would put him out of business. While he speaks to Rushing onscreen, workers literally run through his fields with buckets of green tomatoes—they are paid based on how much they pick. The costs of production and transportation are steep, Rodriguez says, and supermarkets have a higher profit margin than he does.

“This is a tremendously wealthy food system,” Holt-Gimenez says. “Six trillion dollars a year. It’s just very poorly distributed.” It is the nature of the food system, he says, to render workers like Ana invisible. “When you pick up an apple, you don’t see the labor in that apple . . . You walk down the grocery aisle, think about all this phantom labor embodied in all those products. We don’t see it.”

“We break ourselves working in the fields,” says a raspberry picker for BerryMex, a supplier for U.S. company Driscoll’s. Fearing retaliation, she speaks with her face covered by the lavender bandanna she wears in the field. She shows Rushing the thorns in her hands and arms she hasn’t been able to pick out. “It’s like sandpaper,” he says, feeling her skin.

When he tells her how much raspberries sell for in the U.S., she scarcely believes him. “How is it possible that they sell their product for so much money and they pay us so little for it?” The growers pay them “una miseria,” a pittance, she says again and again.