Labor Lost the Fight Over Fast Track. But the Fact That Unions Oppose the TPP at All Is a Big Deal. 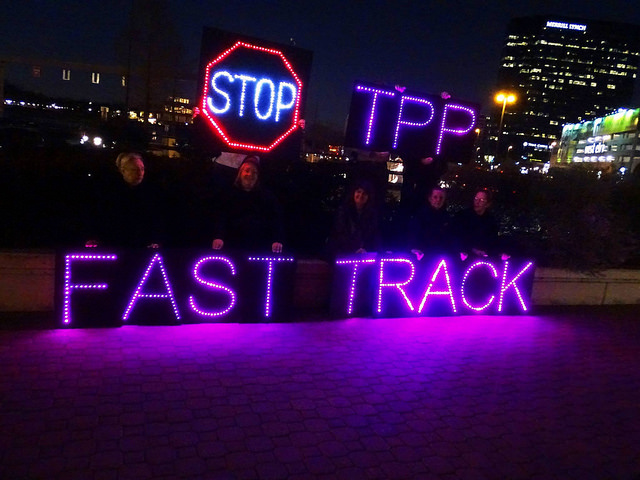 The AFL-CIO's opposition to the free trade deal signals a shift in how unions deal with free trade agreements. (Backbone Campaign / Flickr)

Organized labor’s recent “victory” over President Obama’s Trans-Pacific Partnership free trade initiative, was short-lived, as “fast track” was passed by Congress shortly after it had been denied him earlier in the month. But labor’s strong opposition to the deal is worth examining a bit more closely, as the fight was more than an uncommon rift between the administration and one of the Democratic Party’s steadiest and most powerful constituency groups. Labor’s opposition to the TPP is a dramatic sign of the transformation of popular opinion on a vintage issue of American public policy since World War II.

That the TPP could so easily be linked by its critics to the job-killing, wage-reducing interests of the “one percent” reflects deep and changing understandings of how the global economy works (or rather all too often doesn’t) for ordinary Americans. On this issue, the AFL-CIO, rather than reflecting narrow, let alone petulant comeuppance, is speaking with the wizened voice of collective experience after two terms of relative presidential neglect.

No one was a bigger champion of free trade at the end of World War II than the AFL-CIO, along with New Deal Democrats to whom the labor federation attached its deepest political loyalties. From a critique of controlled trade and top-down economic manipulation most notoriously associated with Japanese zaibatsu and German cartels like the I.G. Farben chemical empire, American liberals stressed the importance of both the free flow of commerce and workers’ freedom to organize. Only unencumbered access to markets and raw materials, such a view suggested, could assure the continuing growth of the American as well as worldwide industrial order.

In fulsome support of the Marshall Plan and surrounding international capitalistic institutions like Bretton Woods, the World Bank, the International Monetary Fund and the General Agreement on Trade and Tariffs, the labor movement—having expelled its own Communist-linked affiliates by 1948—was often more anti-communist than the State Department itself during the Cold War years. In an era when strong unions claimed up to 80 percent of workforce representation in basic industries, it was not surprising that labor leaders would identify their own members’ welfare with that of the free-enterprise economy in which they were employed.  Indeed, Philip Kaiser, assistant secretary of labor for international affairs under President Truman, later recalled the suspicion that the American labor liberals originally faced in Europe among those who could not “[see] the difference between American competitive capitalism and their own national monopoly capitalism built on old feudal structures.”

More than mere freedom from government or employer control, open markets were linked to a period of economic growth and rising incomes that publicist Henry Luce anticipated as “the American Century” and that, in retrospect, also heralded a relatively egalitarian social structure. Thus for good reason—with the exception of garment and textile unions who first felt the sting of a new order of international wage competition—U.S. unions long endorsed “free-trade” unionism. Not until the NAFTA debates of 1993-1994, when the threat to American-sited factories from what maverick presidential candidate Ross Perot had popularized as the “giant sucking sound” of jobs leaving the U.S. and going to Mexico, did the labor federation first seriously reverse course, albeit ( in a standoff with another Democratic President, this time Bill Clinton) in a losing cause.

But changing attitudes came too late to effectively redirect social policy.  In an increasingly competitive world market, the link between corporate profit margins and worker welfare had become increasingly frayed. In the name of “social partnership” or “social dialogue,” America’s Cold War allies generally found ways to shield themselves from the worst of free-market competition and/or to blunt its impact for their own labor forces.

The European Common Market, for example, with stringent initial protections for European farmers and auto makers, was, according to historian Judith Stein, “really a customs union that violated [the core principles of] the GATT.” In addition, by various forms of “industrial policy,” or strategic subsidy of selected economic sectors and worker training, Japan and West Germany leaped ahead of the U.S. in key sectors of economic development, while even smaller states like Israel and Singapore blossomed thanks to outright state investment in the private sector or openly protectionist trade policy.

American workers realized little or none of such benefits, even when their preferred representatives presided over Congress and the White House. The unions watched, meanwhile, while their memberships dropped precipitously, from a high of 35 percent of the workforce in the mid-1950s to a paltry 11 percent today (including a mere 7 percent in the private sector). With the strike weapon now often a nearly suicidal non-option, American workers have watched their living standards decline, even as in the legislative realm, trade union rights, especially in the public sector, have become ever more restricted.

In an ever-more-expansive world economy, some Americans have prospered as never before, but the middle (where collective-bargaining contracts once reigned) has all but been wrung out of an hourglass economy. But for a few impotent side agreements to major free-trade treaties, workers have simply not been cut into the ‘deal’ of free trade.

All this is why American unions saying “Enough!” in the face of President Obama’s fast-track authority and attempt to pass the TPP and coming T-TIPP is such an important shift for American unions. The interesting question is not why they adopted the position they did, but what took them so long?