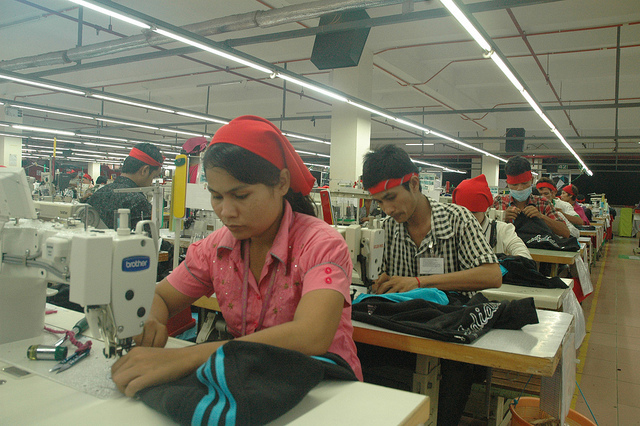 At the end of June, nearly 350 workers fainted in garment factories across Cambodia, with more than 100 collapsing on one day alone. These developments are part of a much wider pattern in the country: In 2011, there were 2,071 incidents of workers fainting, in 2012 there were 2,100. Last spring, nearly 120 workers fainted at two textile factories that make products for Puma and Adidas. From July of last year on, there were 733 fainting incidents across 14 different factories, almost all by women, who make up the vast majority of Cambodia’s garment workforce.

These recent events have naturally led to concerns about the health of workers in Cambodia’s textile industry, a sector that has received increased criticism in recent years as a result of what some say are abusive labor conditions. The faintings demonstrate that a wider discussion of the conditions these workers work under is needed—not just within Cambodia, but among the global brands who rely upon their labor.

Cheav Bunrith, spokesman for Cambodia’s National Social Security Fund (NSSF) declared that the fainting was connected to tainted food. “It’s normal,” he told The Cambodia Daily. “Technically, if a factory has an incident of fainting, more will occur during the following days in smaller numbers.” The NSSF released a report dismissing the suggestion that the incidents were somehow connected to workplace conditions.

But Bunrith’s declaration, and the aforementioned report, conflict with other reports from workers. Seang Sokun, a representative from Coalition of Cambodian Apparel Workers Democratic Union, said he had been informed that the fumes at one factory had caused the fainting. “The investigating team didn’t use the right equipment,” Sokun said, “They used their noses … and found nothing.”

A recent comprehensive investigation also suggests an operative link between health and work environment. At the end of 2014, a study conducted by the International Labour Organization’s (ILO) Better Factories Cambodia project, together with the Agence Française de Développement (AFD) and Angkor Research and Consulting Ltd., found high levels of food insecurity and anemia among Cambodian garment workers.

According to that study, 43.2% of the workers surveyed suffer from anemia and 15.7% of the workers are underweight. The study also found that garment workers spend around $9 per week on food, or $1.30 every day.

“Anemia and food insecurity can contribute to wide-ranging health problems for workers,” said Better Factories Cambodia Program Manager Jill Tucker in a statement. “Anemia often leads to chronic fatigue, difficulty concentrating and low productivity. Addressing these anemia levels will be complex, but is key to improving productivity and business outcomes in the garment sector.”

Enforcing regulations that improve the health of workers has been a challenge for a number of reasons, but one of the major ones is the lack of sick time. Cambodian Labor Law entitles workers to sick leave for a maximum of six months and requires. However, according to a 140-page report that Human Rights Watch released in March, managers frequently deducted a disproportionate amount of money from their pay if they used their sick time. Additionally, many workers said they didn’t take time off, even if sick, for fear of facing punishment or termination. This is obviously a problem as workers frequently attend their jobs while suffering from various illnesses.

The report quotes a factory worker named Chhau San. “If we have taken three days [sick] leave, then they deduct $20 from what we have earned,” said San, “They say to us: ‘If you want to earn that money back, work more.’ We only bring medical certificates because we feel they will scream at us less.”

The HRW report also found that workers were forced to work overtime and government oversight was infrequently applied. Thousands of inspections have been carried out, but the report was only able to identify 10 instances when fines were actually imposed on factories.

Cambodia’s garment industry employs an estimated 700,000 people, and last year garment exports reportedly totaled $5.7 billion. It has received international attention in recent years as a result of tragedy and turmoil: In 2013, a shoe factory collapsed, killing two workers. Last year a strike for higher wages turned deadly when police fired into a group of protesters, killing at least four people. The country has also gained attention because many popular western brands source from factories in Cambodia. The HRW report gleaned information via contacts from Adidas, Armani, Gap, H&M, Joe Fresh and Marks and Spencer.

William Conkin, Country Program Director at the AFL-CIO’s Solidarity Center for Cambodia, stresses the need for food nutrition programs, food allowances and regular labor inspections. He also mentioned the need for the brands involved to take responsibility for the workers who create their products.

“The international brands must be committed to this in practice,” said Conkin, “as their various codes and standards state that wages are essential to meeting the basic needs of workers. Wages increases, with sufficient funding for meals during work time, are critically linked to how well workers can look after themselves.”

While a new minimum wage campaign is currently gaining ground in the country, a repressive new labor law, which would restrict unionization and further erode human rights, has also been recently proposed. The fainting spells are part of a much broader struggle in Cambodia over what the future of labor in the country will look like.

“The mass faintings should be regarded as work related accidents,” Conkin told me. It’s a necessary step in a longstanding struggle for these workers to establish their basic rights on the job.