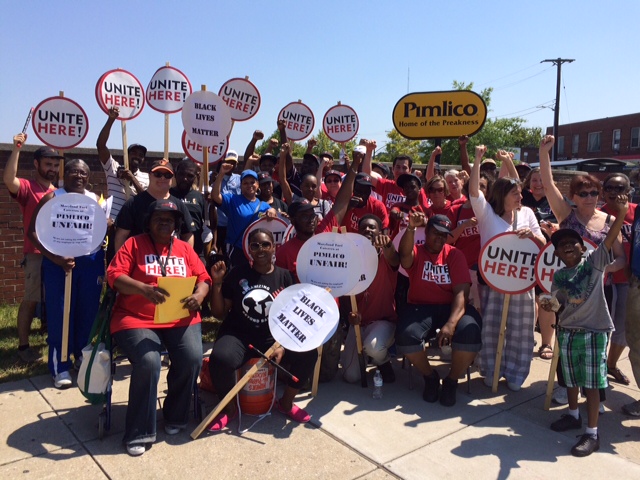 BALTIMORE—Boosters of the Maryland horse racing industry cheered earlier this year when Baltimore’s annual Preakness Stakes attracted a record-breaking crowd of more than 130,000. The huge crowd thrilled to the victory of the bay colt American Pharaoh, who would go on to win the Triple Crown, and a place in thoroughbred racing history. At the betting windows, a total of $85.161 million was wagered, another record breaker in the 140-year history of the race.

But there’s a dark side of Baltimore’s sports and entertainment complex: Local residents toil at low-wage jobs to support the huge venues and the extravagant incomes of out-of-town performers, whether those performers are football players, rock stars, or even horses (who, of course, don't pocket their own pay).

That disparity was on full display on August 4 as union members and their supporters rallied at a gritty Baltimore street corner to protest union busting by Maryland Turf Caterers, a unit of the horse racing empire of Canadian billionaire Frank Stronach, which owns the Preakness track, as well as other tracks in Maryland, Florida, Oregon and California.

Union workers at the company are fighting off concession demands in contract bargaining that would make most workers ineligible for company healthcare coverage (and raise costs for the rest), end retirement benefits and cut back on overtime pay, says Margaret Ellis, an organizer for UNITE HERE Local 7.

Those workers are a group of about 40 cooks, servers, bartenders, porters and concession-stand attendants who alternate between assignments at the Preakness’ Pimlico Race Course and nearby Laurel Park, both owned by the Stronach Group.

Louis Jones, who works as a porter for Maryland Turf Caterers for over 20 years, says his job quality has declined, with his hourly wage stuck at $9.35 for seven years and Maryland Turf Caterers doing away with the periodic bonuses that once made the job more livable. The workers typically earn $9 to $11 an hour and have not seen any negotiated pay raises since the old contract expired in 2008, Ellis says.

“In some ways, it’s the same old story,” remarks Roxie Herbekian, President of Local 7. Local governments shower benefits on businesses like Stronach with the promise of creating jobs and economic prosperity, yet many of the jobs pay so poorly that they trap workers in a cycle of near-poverty, or worse. In Stronach’s case, the company benefits from elaborate state-sponsored schemes to subsidize the Maryland horse racing industry, with little or no benefit trickling down to the low-income workers who live in the neighborhoods surrounding the racecourses, Herbekian says. The Maryland Racing Commission, for example, collected about $48 million last year in a special gambling tax to distribute to the state’s racetracks, with the money dedicated to plumping up purses, or for improvements to track properties.

The site of this week’s demonstration provides a case in point. The sprawling Pimlico complex borders several of Baltimore’s segregated residential neighborhoods. At one end is the affluent Mt. Washington neighborhood, a leafy, mostly-white enclave where few track workers can afford to live. At another end is Park Heights, a dreary and economically depressed area populated by low-income African Americans, including some of the track workers. Tuesday’s demonstration took place at the corner of Park Heights Ave. and Belvedere, with the gigantic Pimlico grandstand dominating the view to the east, and boarded-up storefronts, run-down residences and dirty streets spreading out to the west.

“They think this is a hoodlum neighborhood, a ghetto neighborhood,” says Jones, who tells In These Times that the quality of life in Park Heights has declined steadily even as billions of dollars in horseracing money has passed though the race track. The neighborhood is desperate for an infusion of decent jobs, Jones says, but has been continually disappointed at lack of action on job creation from elected officials. A plan floated several years back to open a slot machine gambling parlor at Pimlico seemed to offer the promise of local jobs, he says, but the plan was abandoned in favor of a new Caesars Entertainment Corp. casino in the downtown tourist district

For Maryland Turf Caterers, the plan seems to be not to promote good jobs, but to turn them into bad ones by bullying the union workers, Ellis says. “They put me off the property” at the Laurel Race Course earlier this year, she says, which she believes was retaliation for her role as a union organizer. The union is seeking the intervention of the National Labor Relations Board in that incident, and is weighing other actions at the labor board.

Stronach Chief Operating Officer Tim Ritvo defended the company’s labor policies, insisting that the Maryland race tracks were losing money and cuts in labor costs were necessary if the tracks are to remain open at all. “Listen, it’s true the Preakness makes a ton of money. The problem is that we lose money the other 355 days of the year. We lost $5 million last year [in Maryland],” he tells In These Times.

“I’m originally a Democrat from Boston, so I don’t have a beef with unions,” he says. “We have a race track in Hallandale [Florida] where we have UNITE HERE and we don’t have any problems. That’s because it is profitable so we have the money to pay people. We have a hell of a lot more union members in Florida than we do here [in Maryland].”

“We take responsibility—we are not going to take our financial problems out on the workers,” he says. “We only want [the union members] to have the same medical and pension that all of our other workers have. We treat our workers as well as any other company in the same [catering] businesses around here, and a hell a lot of better than most restaurants,” in the area, Rivko says.

“They get a tremendous amount of money from the state," retorts Local 7’s Herbekian. “So I don’t think the Stronach Group is going to miss a beat if they just pay those workers for healthcare, and a decent raise. These workers are not making some huge salaries that are going to break the bank.”