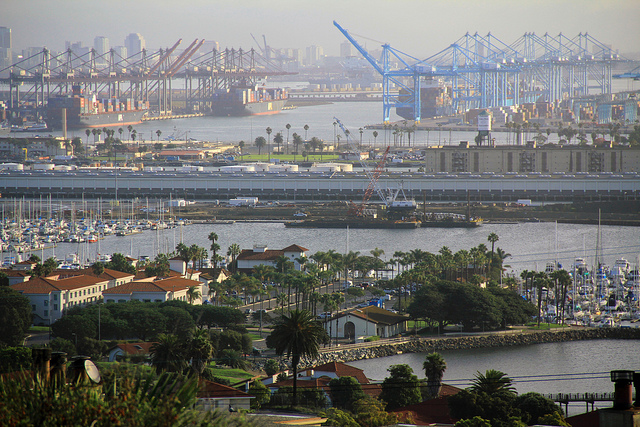 The nation’s largest port—spread across parts of both Los Angeles and Long Beach, CA—is a strangely varied workplace. And after years of tenacious effort, workers throughout the port may soon share one important tool their predecessors once had: a union and, therefore, a better job.

At one extreme of the state's ports, there are longshore workers who belong to one of the most progressive unions in the U.S., the International Longshore and Warehouse Union. It has brought annual incomes of over $100,000 and higher skilled work to many of its members, once regarded as low-skilled.

At the other end, there are truck drivers (for “drayage companies,” that move goods from dock to warehouses), who are wrongly classified as “independent contractors”—as the regional office of the National Labor Relations Board recently determined—and who have unpredictable incomes, often below the minimum wage. And there are warehouse workers who typically earn $9 to $11 an hour but may work only part-time for a labor contractor or for the warehouse operator itself.

Once these jobs were unionized and paid reasonably decent “middle-class wages,”  but the unions—mainly Teamsters—lost their contracts and members. The employers vary, too, both in size and in organization—from parts of global corporations with sophisticated management to family-owned firms driven by personality (often a bit tyrannical or ideological).

After 10 years of trying, these low-wage workers are stepping up their game, raising the prospect of once again being unionized. And if that happens, it will be a testament to the workers’ willingness to take direct action, even at a risk to their jobs.

Thirty-eight drivers at a drayage company, Pacific-9, who have demonstrated at both state and local legal hearings that they have been misclassified as independent contractors and deprived of $6 million in back pay, are on their sixth strike in two years, an indefinite walkout that has already lasted ten weeks.

A couple dozen warehouse workers at a facility owned by California Cartage, a large logistics firm, are on their first strike. They are leaders in a drive to improve work organized with the help of a worker center, a partial, short-term walkout started Tuesday by a couple dozen leaders from a workforce that can range from 150 to 300, about half directly hired, half hired through a contractor.

The workers have received help from the Warehouse Worker Resource Center, an independent operation at the port that grew out of a Change to Win project in the warehouses of the “inland empire” near San Bernadino. The strike is a protest against retaliation for organizing and other unfair labor practices as well as a call for higher wages and safer working conditions.

Change to Win’s Strategic Organizing Center started out helping the Teamsters to organize a union of the short-haul truckers, and the Teamsters have recently won three union representation elections. One newly unionized company has been created out of one of the first strike targets. The head of the hedge fund that bought its predecessor is now shifting assets to the new company, called Eco-Flo. He has promised to negotiate a contract with the firm’s employees—dropping the contractor ruse—and to install a zero-emissions fleet of new trucks.

“He was open to what was going on,” Maynard said, “ and saw the law catching up to the industry.” But he was also pushed by workers and by public pension funds that provided some of the investment capital.

The Warehouse Workers Resource Center, also nurtured by Change to Win in its origins, is not presently organizing for a union, although it is not opposed to unions. It aims to help workers organize to improve working conditions and to defend themselves against management, using direct action and the law to protect workers’ legally obliged pay and other rights. California Cartage is another big company with big clients—Amazon, Sears, K-Mart, VF—that sees itself as the logistics company of the future, and Resource Center spokesperson Sheheryar Kasoosji says that they want workers from the start to help define that future.
“There’s clearly an opportunity for this place to do better,” he says. “It’s just a matter of calling on the company to do the right thing.”

“This year has been a watershed year in terms of our effort to do the impossible,” says Nick Weiner, a long-time Change to Win staff person directing the decade-old ports organizing project. “No one thought that truck drivers could even be organized, and no employer would recognize them as employees or sit down with them to have labor peace.”