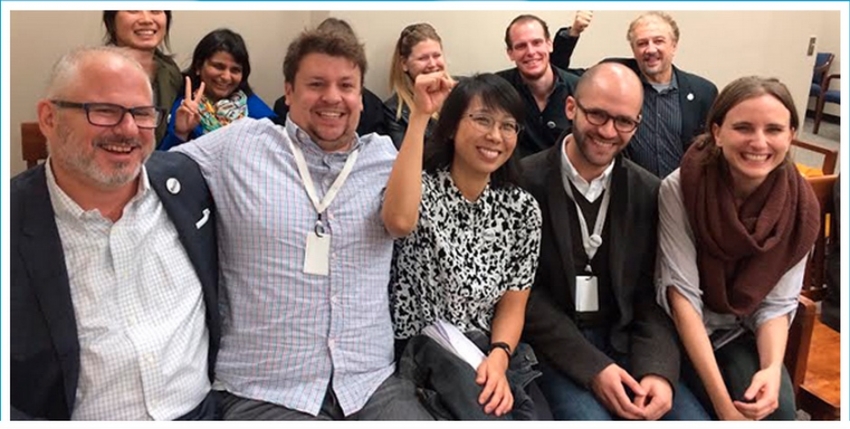 Al Jazeera America staff after the announcement of the vote's total. (NewsGuild / Facebook)

The unionization of digital media continues—now at Al Jazeera America (AJAM), after the National Labor Relations Board confirmed this morning that the news publication’s digital workers voted 32-5 in favor of union representation under the NewsGuild of New York, an affiliate of the Communications Workers of America (CWA).

AJAM digital workers had previously sought voluntary union recognition from employers on September 3. “As we enter our third year in the public eye, a troubling lack of transparency, inconsistent management and lack of clear redress have persisted at AJAM Digital. Discrepancies in salaries, responsibilities and the way job performance is evaluated undermine our work and the harmony of our workplace,” read a mission statement released at the time. AJAM management, however, declined to recognize the staff’s desire to unionize—a move which, while legal, usually makes union recognition more difficult for workers. This triggered an NLRB-run election that took place September 29, with mail-in ballots continuing to come in until yesterday.

Keep this reporting possible by making a donation today. All gifts made by Oct. 7 will be matched, making double the impact.

Of the approximately 50 digital workers at AJAM, five had been designated supervisors who would not be included in the bargaining. Up until this morning, management had also contested that nine editors could not be included in the bargaining unit, arguing that their work as senior staff members classified them as supervisors and thus ineligible to join the union. But today’s results, overwhelmingly pro-union, seems to have swayed management on this point of contention.

“We welcome the result of the election and now that the process has been completed we will not maintain our challenge to the status of the nine individuals in question. We warmly recognize them as members of the bargaining unit and we look forward to working with all our staff in an open and transparent manner," an AJAM spokesperson told In These Times.

Reacting to AJAM management’s concession, online news editor Gregg Levine says, “It has always been our belief that these nine were solidly members of our newsroom, sharing the same workload and burdens as many who were not contested. It would have been nice if Al Jazeera could have dropped their objections before the election, or even before the ballots were tallied as we wanted every vote counted—no matter the outcome—as that is the most democratic way forward.”

The election results bring AJAM into the fold of recently successful digital media organizing conducted by the NewsGuild of New York. The editorial staff at the Guardian US voted to join the NewsGuild in late July, with management voluntarily recognizing the outcome soon after. Several additional union drives are underway and expected to become public soon, with CWA forwarding a $500,000 internal grant to the NewsGuild last month in order to boost organizing for the 2,000 member CWA local.

Organizing at another union, the Writers Guild of America-East, has secured union recognition for editorial staffers at Gawker, Salon, and Vice. Brendan James of the International Business Times reported last week that Huffington Post employees would be seeking unionization with the Writers Guild of America-East, signing on after also considering the NewsGuild of New York.

Reached via email, Gawker editorial staffer Hamilton Nolan offered congratulations to AJAM digital workers. Referring to management's initial refusal to recognize the union and the battle over the nine editors who would be included in the bargaining unit, Nolan remarked that AJAM management “should stop acting like pricks,” adding that they had been "fighting a losing battle against their own employees and making themselves look bad in the process." (As noted above, management eventually did concede the fight over the nine editors.)

A March 2014 study released by the Pew Research Center notes that the rate of hiring at digital news publications has been “explosive” in recent years: “Two years ago, BuzzFeed had about a half dozen editorial employees. Now it has at least 170. Three years ago, Bleacher Report had no paid writers; now there are about 50. The rapidly expanding global Vice Media operation has already hired 48 more staffers in the U.S. this year alone.”

As this explosive growth in digital reporting continues, management looking “bad in the process” often seems to be inevitable. In August, BuzzFeed CEO Jonah Peretti told workers at a company meeting, “I think unions have had a positive impact on a lot of places, like if you’re working on an assembly line, and if you’re negotiating with management it can make a huge difference, particularly when labor is more replaceable.” But as it pertains to a union at Buzzfeed, he said “I don’t think a union is right for BuzzFeed,” adding that unions create an “adversarial” relationship between management and employees.

AJAM staff clearly disagree. “I am truly excited and honored to celebrate the overwhelming yes vote with my colleagues today,” E. Tammy Kim, an AJAM features staff writer, says. “We've been organizing to improve the conditions of our workplace—job security, fair evaluations, a grievance procedure, cost-of-living adjustments and pay increases, etc.—but also to have a voice and support one another within a formal structure.”

The Communications Workers of America is a sponsor of In These Times. Sponsors play no role in editorial content.