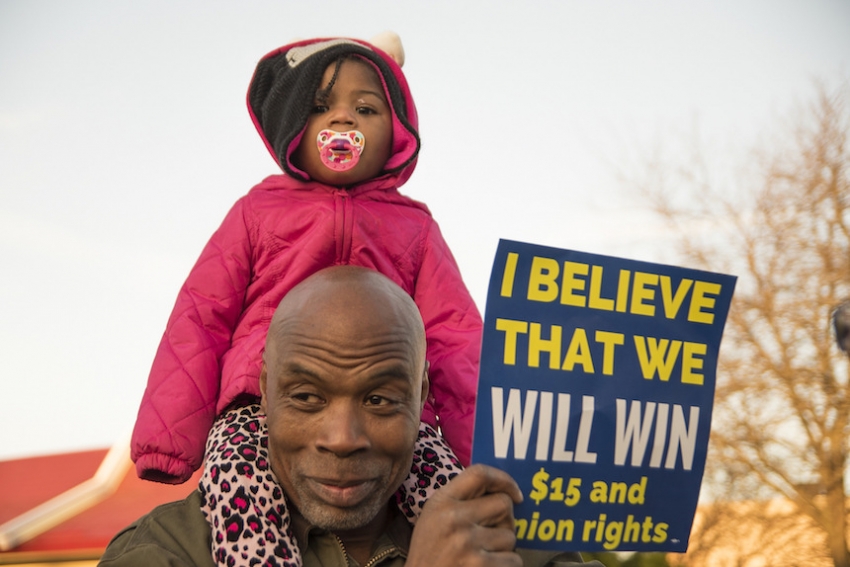 It’s a safe bet that most working people would like a pay raise. They are also often reluctant to ask for one, let alone demand a doubling of their hourly rates.

Low-wage Americans—the 42 percent of workers making less than $15 an hour—know all too well that they don’t just want more; they need more simply to survive at the lowliest version of the American standard of living. Increasingly, they are pressing their demands more forcefully, possibly inventing a new form of unionism as they persevere, organizers suggest.

This week, as the White House entertains a discussion of “worker voice,” there is new evidence from public opinion polls, legislative proposals, public testimony and activity from Congress to city halls that the fight to empower and properly pay the workers in low-wage service jobs continues to grow.

And increasingly, these workers say, they want and need a union. They also want—and say they are willing to register and to vote for—political candidates who will fight for their needs.

From the beginning, the Fight for $15 has included a demand for the right to form a union without intimidation, but the demand for $15 an hour pay stole the limelight. Now some workers who have been active in the Fight for $15 movement realize they already have an organization, even if it’s not the standard model union.

The National Employment Law Project, a pro-worker advocacy and research group, recently commissioned a survey of low-wage workers that showed strong support for both thrusts of the Fight for $15, including increased interest in registering and voting if their wage and union rights were clearly supported by at least one presidential candidate.

NELP executive director Chris Owens was impressed by the survey’s findings that half of low-wage workers had heard of the Fight for $15 and that workers were more willing to engage in politics with the right candidate message. “What I feel that’s really different,” she said, “is the heightened awareness that unions could make a difference, and there is also heightened awareness when people see workers like themselves put themselves on the line, take risks for higher wages and a union, there will be more interest in forming unions.”

Sixty-nine percent of low-wage workers favor raising the minimum wage to $15 an hour, and the same fraction thinks it should be easier for them to form a union, while 72 percent approve of unions in general. That’s a higher approval than among the general public, despite an increase in generic approval of unions revealed in an August Gallup poll to 58 percent, up 5 points from last year. Black workers (87 percent approval) showed the strongest support for unions, followed by young workers (82 percent), then Latinos (79 percent), but strikingly 77 percent of low-wage workers in the South, long considered a region hard to organize, favored unions.

Fight for $15 national organizing director Kendall Fells is impressed not only with the strong interest in a union but also with workers’ sense that they already have a union. “If you’d asked me three years ago before the first strike, I would have been surprised [at the current level of support for a union], but it’s been clear that they already see it [Fight for $15] as their organization and call it a union. Low-wage workers now see belonging to an organization is the way to defend themselves on the job.”

“I would say these workers are already in a union,” he continued. “What will be needed is a mechanism to fund it, once we get McDonald’s to talk, and I think that will happen soon.” McDonald’s is under pressure from workers and governments around the world, he noted, and “they’re going to have to come to the table” to solve their problems. Fells believes that McDonald’s will ultimately see the value of workers being organized as it struggles to dig out of its difficulties.

This is a new form of “21st century unionism,” unlike the unions of the 20th century organized at workplaces from auto plants and steel mills to nursing homes, Fells says. “The tangible difference is the size of the organization, and the scale of the movement. The scale is so broad and varied. Then there is the difference of workers being in the streets, willing to risk their jobs to get what they need, and the gelling of progressive movements around the low-wage workers.”

This new information is part of the message low-wage workers are also delivering around the country in nearly 30 cities this week, starting on Tuesday, before “peoples’ wage boards,” panels of civic or political leaders. They are modeled on the wage boards that Gov. Andrew Cuomo set up earlier this year in accord with New York law to review wage standards for fast food workers in response to workers’ demands. Based on the testimony, he raised the fast food restaurant wages in New York to $15 an hour. While few other states have laws authorizing such official boards, the workers hope their testimony will sway lawmakers to raise minimum wages.

Generally low wage workers participate below average rates in electoral politics, but the survey by Victoria Research found that nearly two-thirds of low-wage workers who had registered to vote would be more likely to cast a ballot if there were a presidential candidate supporting $15 and a union. Among those workers who are not registered, 65 percent said they would be more likely to register and vote for such a candidate.

The battle over low-wage worker unionization has unsurprisingly spilled over into Congress and the campaigns, with the Democratic Party already endorsing a $15 an hour minimum wage for its platform. Meanwhile, Republicans in the Senate are promoting legislation that would overturn a recent National Labor Relations Board decision that franchisors, like McDonald’s Corporation, and franchisees are likely to be considered joint employers with responsibility for workers’ wages and treatment on the job. Democrats, like Sen. Sherrod Brown (D-OH), are trying to stop the move.

On Tuesday Sen. Bernie Sanders (D-VT) and Rep. Mark Pocan (D-WI), with support from Brown and other progressive Democrats announced introduction of a new Workplace Democracy Act (much less ambitious than Sanders’ previous legislation under the same title and despite its similarities, even less comprehensive than the Employees Free Choice Act that the labor movement had hoped would pass in the early years of the Obama administration). It would permit workers to gain recognition of their union through either a demonstration of majority signing support or through an election, and it would give either labor or management prompt recourse to mediation and then arbitration if the two parties could not reach agreement on a first contract reasonably quickly.

In addition to the deprivation imposed on workers and their families, organizers of low wage workers have argued that big, profitable corporations like Walmart and McDonald’s—the nation’s two largest low-wage employers—have effectively relied on taxpayer subsidies in the form of public safety net programs, from food stamps to Medicaid, public housing aid to childcare, that their employees turn to because they do not earn enough. Yet those companies could afford to provide the wages and benefit packages needed for a decent life, as they do in countries like Denmark and Australia.

A straightforward wage increase to $15 an hour would most directly reduce the public subsidies to compensate for the harm and expense caused by poverty and inequality resulting from big companies paying low wages. But in cases where that may be difficult, supporters of underpaid workers can pursue other strategies. For example, on Wednesday Chicago-area residents from community groups affiliated with National People's Action rallied before the Cook County Board of Commissioners chambers to promote the Cook County Responsible Business Act.

The act would apply to big corporations or groups of franchises that have more than 750 employees in Cook County who earn less than $14.57 an hour, now the “living wage” that businesses servicing contracts with or receiving direct subsidies from the county must pay. Under the Responsible Business Act, they would have to pay a fee to the country for every worker below that level or else pay the living wage. The formula for the fee would work like this: the number of low-wage employees X 750 X the number of dollars below the living wage per year. A company paying 1000 workers $10.57 an hour would thus pay 1,000 X 750 X 4, or $3 million a year to compensate somewhat for expenses they create for the public and to more effectively deal with those problems in the future. Supporters say the bill could raise $500 million over the first four years.

The community groups, using primarily a study of the effects of Walmart’s low wages prepared by the Democratic minority staff of the House Health, Education and Welfare committee, argue that poverty resulting directly from low wages contributes to crime, health problems, and depressed local community economies. They estimate the cost to the county economy is about $1.2 billion a year, including the need for increased public expenses. In addition to compensating county government, the bill would concentrate county spending of the new revenue on pretrial services, housing, family aid, and health care. A poll conducted for the bill’s proponents showed that 38 percent of registered voters strongly supported the Responsible Business Act, and 24 percent supported it somewhat.

On Wednesday, Derrell Odom, 36, father of two, Marine veteran of two tours of duty in Iraq, and an employee of Kentucky Fried Chicken who started working in fast-food restaurants when he was 19, will testify before a “peoples wage board” in Atlanta. “My message to the powers that be,” he says, “is that we can’t survive on $7.25. I have one bedroom in an apartment with three roommates. It’s just a struggle to survive. I often don’t even know where my next meal will come from.”

That is doubly true because his manager often offers him as little as 15 to 20 hours of work. Then, last week, when Odom worked more than 40 hours, the manager forced him to take his overtime hours not with the legally required premium pay, but at the straight rate, transferred to this week’s paycheck.

Such treatment demoralizes most workers, but not Odom, even as he tries to pay off $7,000 in college loans and help to support his kids. “They want to keep you down, make you think they don’t need you,” he says. “With a union we’ll have someone to make our voices heard.”