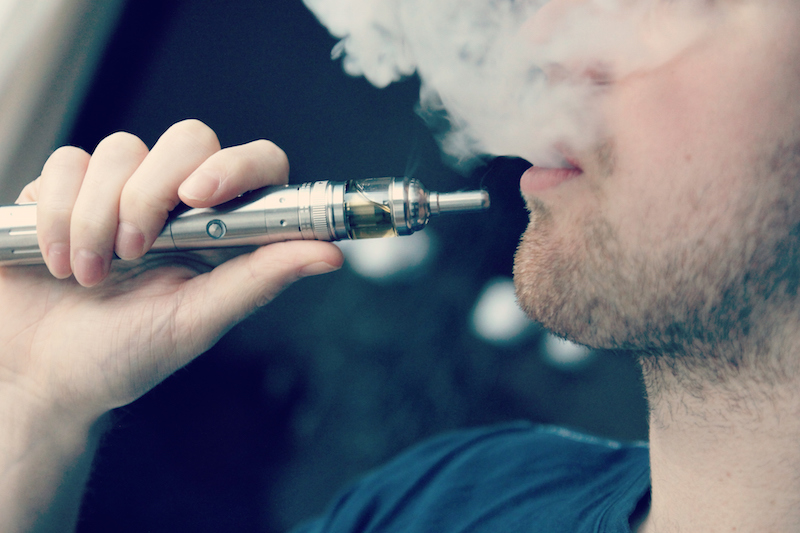 Nearly 1.8 million young adults and children have tried e-cigarettes, according to the Center for Disease Control.   (Creative Commons/TBEC Review)

Since the early 2000s, chemicals used to create artificial butter and other flavorings have become notorious for their ability to cause serious lung disease. The best known of these chemicals is called diacetyl, but there are others, some now used as substitutes for diacetyl. When inhaled, their dusts and vapors can cause serious respiratory and other health problems, including a potentially fatal lung disease called bronchiolitis obliterans. The problem first came to public attention when workers making microwave popcorn  became seriously—some fatally—ill from these exposures.

But diacetyl and related chemicals are not limited to butter flavoring or to microwave popcorn. They are used in to make many other artificial flavorings, among them fruit flavors, candy, alcohol and even yogurt flavors—flavors that include caramel, butterscotch, piña colada and strawberry. Their use extends to commercial and retail bakeries, manufacturers of other baked and snack foods, to candy, cheese, coffee, the food flavorings themselves and to restaurants that use cooking products that contain such flavors.

And now another exposure pathway is emerging: the vapor from flavored e-cigarettes.

A study just published by Environmental Health Perspectives found diacetyl or at least one of two other artificial flavoring chemicals—2,3-pentanedione and acetoin that are used similarly and appear to have similar health effects—in 92 percent of the flavored e-cigarettes tested. “The flavoring is in a liquid form and our concern is that the exposure pathway is similar to that of the workers who are getting sick,” Joseph G. Allen, assistant professor of exposure assessment science at the Harvard T.H. Chan School of Public Health and the study’s lead author told In These Times. The exposure to heated flavoring chemicals that are then directly inhaled is similar for workers exposed to these chemicals in food manufacturing and preparation and for users of e-cigarettes, Allen explained.

As Allen and his co-authors point out, there are more than 7,000 e-cigarette flavors currently marketed. Diacetyl, 2,3-pentanedione and acetoin are among the best-known chemicals used in these flavors. The researchers found these chemicals in e-cigarettes sold as flavored (with names like “tutti frutti,” “cotton candy” and “oatmeal cookie”) and also those not explicitly flavored, sold with names that included  “classic,” “tobacco” or “menthol.” While the study tested only 51 types of e-cigarettes, previous studies have also found these chemicals in the majority of e-cigarettes tested.

“There are no defined safe limits to these chemicals at all for exposure through these e-cigarettes,” said Allen. This is true of exposure for users of these devices—that as well as for bystanders or others who might be exposed to these chemical vapors in secondhand smoke. In addition, for some heavy users of e-cigarettes, the “frequency and duration of exposure could be higher than those of workers,” he explained.

Right now, said Allen, the lack of established exposure limits for these chemicals in e-cigarettes is of concern for any users. Yet it is of particular for young people, he noted, given that an estimated nearly 1.8 million children have tried e-cigarettes, according to the U.S. Centers for Disease Control and Prevention (CDC). Not only are there no standards for these chemicals in e-cigarettes but the U.S. Food and Drug Administration (FDA), which regulates tobacco products, does not currently regulate e-cigarettes except for those used therapeutically.

Meanwhile, when it comes to workplace exposures, despite the past 15 years worth of documented adverse occupational exposures, the U.S. is still without any federally enforceable specific safety standards for these flavoring chemicals. In 2010, California passed a rule that requires monitoring for diacetyl by any workplace that uses mixtures that contain more than 1 percent of the chemical. The rule is not an exposure limit but

the monitoring should trigger employers to make sure measures are in place to prevent harmful exposures, explained Frances Schreiberg, of counsel with the law firm Kazan, McClain, Satterley & Greenwood. How well this works, she noted, depends on how the rule is enforced.

On a national level, the American Conference for Governmental Industrial Hygienists has published a workplace exposure limit, but this is not an enforceable standard. The National Institute of Occupational Safety and Health (NIOSH) has drafted recommended limits for diacetyl and 2,3-pentanedione and says it “will also be publishing” its diacetyl limit soon. Yet for now, the draft recommendations fall short of establishing a required limit. And while employers can be cited and fined for unsafe conditions under OSHA’s general regulations for hazardous levels of diacetyl exposure—as the flavoring and fragrance manufacturer in New Jersey Symrise, Inc. was earlier this month—OSHA currently has no legally enforceable permissible exposure limit for diacetyl or many other flavoring chemicals.

"When employees are exposed to certain airborne flavorings like diacetyl, they are more likely to develop respiratory symptoms such as cough, fatigue, and difficulty breathing with exertion or exercise," said Patricia Jones, director of OSHA's Avenel Area Office in New Jersey that issued the citations on December 1st.

But these are the least of the symptoms these chemical exposures can cause. Two employees exposed to food flavorings chemical dust at a California company were so badly affected that their conditions warranted a lung transplant.

As reported by NIOSH, a similar story of exposure occurred at a Texas coffee-processing company. There, a woman working where roasted beans were mixed with liquid flavorings, was like the California workers, originally thought to have shortness of breath related to asthma. She too was eventually diagnosed with bronchiolitis obliterans and put on a wait list for a lung transplant. Like the California flavorings company workers, this worker was not the only one working with liquid flavorings at this Texas coffee-processing facility who was diagnosed with this disease. Both of these Texas workers were healthy, non-smokers before their exposures began.

Yet another California worker, a 10-year veteran of another flavoring manufacturer, has also been diagnosed with bronchiolitis obliterans that has left him with only 40 percent of his lung function. He sued his employer, Mission Flavors & Fragrances Inc., and earlier this year was awarded $2.6 million by an Orange County jury.

Exposures continue and at risk of growing with e-cigarette use

There are many more such cases, but as NIOSH has written, it is difficult to quantify how many. Statistics compiled by NIOSH from the U.S. Environmental Protection Agency and industry chemical production use data only begin to sketch out how many thousands of workers the U.S. flavorings production industry employs. And these figures don’t even begin to account for how many people work in industries that use these flavorings.

Adding to the difficulty of compiling these numbers is the fact that these chemicals aren’t singled out as a separate category under the system that catalogues U.S. employment—and that citations OSHA makes for these exposures are not listed as such in the agency’s violations database.

Despite the lack of legally enforceable exposure standards, the hazards of diacetyl and related flavoring chemicals are now well-recognized. NIOSH and OSHA have issued worker hazard alerts and in 2011 OSHA also added diacetyl to its National Emphasis Program to “minimize or eliminate worker exposure” in microwave popcorn manufacturing. NIOSH is also working on documenting these exposures through its health hazard evaluations (HHE) program. NIOSH spokesperson Stephanie Stevens explained that the agency has “a couple of HHEs underway right now looking at diacetyl exposures in workers.”

But, note the Harvard researchers, there are no comparable efforts underway for e-cigarettes. “We don’t see these warnings reaching consumers on e-cigarettes,” said Allen. “Widespread exposure is occurring,” he added, explaining that given the lack of research to date, how severe the impact was not yet known. “What we do know,” he said, “is based on worker exposure [to these flavorings].”

The bottom line? Not only are workers in the chemical flavorings and food manufacturing and preparation industries continuing to be exposed but with the advent of e-cigarettes, whose use has taken off rapidly—particularly among young people—a great many more people may be at risk for the lung disease associated with these chemicals.