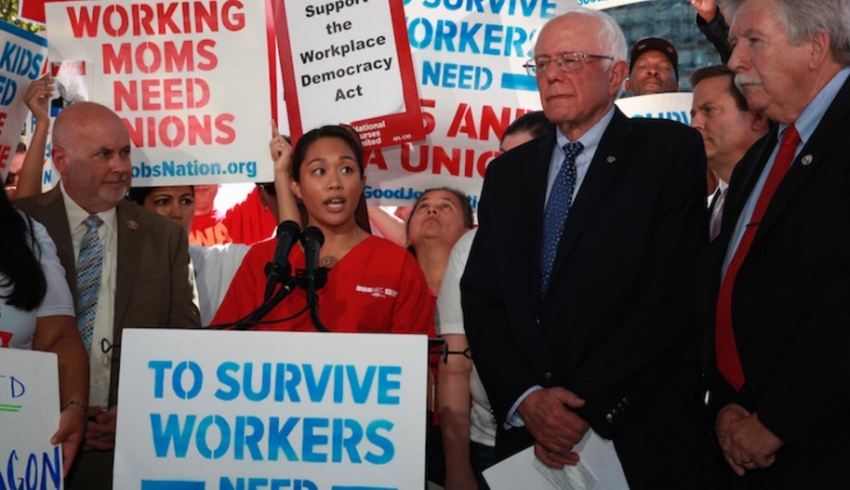 Last October, Allysha Almada, a 28-year old nurse at Huntington Memorial Hospital in Pasadena, California, was invited to the White House Summit on Worker Voice, where she presented President Barack Obama with a stethoscope engraved with the message: "Listen to Nurses."

The White House event occurred two months after the hospital fired Almada and fellow nurse Vicki Lin, who were part of a union organizing drive. Last week, the National Labor Relations Board (NLRB)—the federal agency that oversees union elections and unfair labor practices—did listen to the nurses. It found that Huntington illegally terminated the two nurses for their union involvement.

If the hospital refuses to reinstate the nurses and compensate them for their lost pay, the NLRB will issue a formal indictment (“complaint”), triggering a federal trial before an Administrative Law Judge. Meanwhile, the California Nurses Association—which helped the nurses in their union drive and represented Almada and Lin before the NLRB—has requested the NLRB to seek a federal court injunction to force Huntington hospital to return Almada and Lin to work as soon as possible.

The NLRB will also turn its attention to the other alleged “unfair labor practice” charges against the Huntington administration for violating nurses’ rights during last year’s contentious union organizing campaign.

Huntington's nurses began to organize for union representation in 2014 with the California Nurses Association/National Nurses United (CNA/NNU), concerned about what they say are eroding patient care conditions, including chronic short staffing and inadequate supplies. The management at Huntington, a 625-bed facility with 1,200 nurses, responded with what nurses characterize as a vicious anti-union campaign.

The hospital, the nurses' union says, hired high-priced consultants and lawyers, experienced in union-busting, to intimidate and harass its own employees. Managers at the hospital interrogated nurses about their union activity, required nurses to attend anti-union "captive audience" meetings and denied pro-union nurses access to the hospital when they were off-duty and wanted to discuss union matters.

When pro-union nurses and community allies were meeting in the cafeteria, the union says, hospital security staff told them to remove their literature from the tables, but didn't say anything to a group of anti-union staff at the other side of the cafeteria who had their own materials. One of the hospital's security staff took photos of a pro-union nurse as she passed out leaflets on the public sidewalk outside the hospital. The hospital arbitrarily switched the retirement date of one nurse who had worked at Huntington for 31 years—and who was an outspoken union supporter—so she wouldn't be able to vote in the union election.

Local clergy, elected officials and community leaders joined nurses on delegations to visit hospital CEO Steve Ralph (who earned $1.16 million in 2012, the latest figure available) to urge him to allow the nurses to vote the union up or down without interference and intimidation from management. Ralph promised to look into the allegations, but the hospital continued its anti-union campaign.

Hospital management did not respond to a request for comment.

Almada was initially surprised and upset by Huntington’s activities. She considered the hospital her second home. Her mother has worked there as a nurse for over 30 years. She was born at the hospital, attended its day care center and volunteered there when she was in high school. She worked as a nurse's aide in Huntington's ICU before becoming an RN. She volunteers her family dog at the hospital as a therapy dog.

"I was close with my mom's coworkers. I loved Huntington," Almada recalled. “That’s how I knew I wanted to go into nursing."

Almada was initially reluctant to participate in the union drive.

"At first I wasn't sure it was a good idea," she recalled. "I went to some informational meetings. But I soon realized that we needed a collective voice to be advocates for ourselves and our patients."

She eventually became one of the union’s most visible leaders. Before and after work, she met with fellow nurses—in their homes, coffee shops and outside the hospital—to encourage them to support the unionization effort. She was one of three Huntington nurses whose photo appeared on a CNA-sponsored ad on public buses running throughout the Pasadena area. "Save one life you're a hero," the ad said. "Save a hundred you're a nurse."

Last July, she spoke out at a public community forum at a local church on the need to improve conditions at the hospital, joined by many local elected officials and community leaders who supported the nurses' right to organize. A few days later, she was quoted in a local newspaper about conditions at the hospital and the management's expensive union-busting campaign.

A few weeks later, she was fired, despite the fact that she received excellent performance evaluations and her long-term ties to the hospital. By firing Lin, another union supporter, the hospital revealed that its goal was to intimidate the nurses from voting in favor of the union.

On election day, the hospital received more votes than the union, by a 539 to 445 margin, but 175 votes were disputed, leaving the final results inconclusive.  The NLRB has not certified the results. The union leaders and CNA have vowed to call for another election, hoping that community pressure will stop Huntington from engaging in another union-busting campaign.

The experience had a profound impact on Almada, who was raised in a conservative family and had no prior involvement with activism of any kind.

“Watching the courage of my fellow nurses as they dealt with the hospital’s anti-union campaign, and seeing activists from other unions and from the community lend their support, really opened my eyes and strengthened my resolve to fight for workers’ rights and patient care,” Almada said.

If Huntington complies with the NLRB ruling, it will have to restore the two nurses to their jobs and back pay, but will not suffer any other penalties, such as fines for breaking the law or triple damages for depriving Almada and Lin of their livelihood.

“That’s the sad state of our labor laws,” said Almada, who was a featured speaker at the Capitol Hill press conference last October where Sen. Bernie Sanders introduced the Workplace Democracy Act, legislation to make it easier for workers to form unions through a majority sign-up process and strengthen enforcement of federal labor law when corporations break the rules.

Since the union election, Almada has participated in the White House conference, got married and started a new job at another hospital. But if Huntington offered her a comparable job, “I would definitely go back,” she said. “I want to show the nurses that they shouldn't have to be afraid to exercise their right to organize.”

“Under a union contract, we would not have been fired in the first place,” she explained.