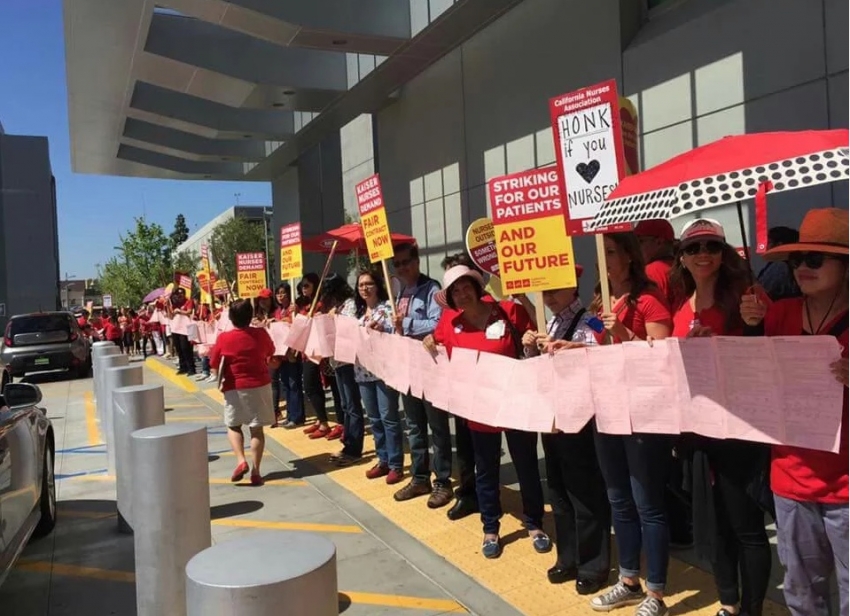 One thousand two hundred registered nurses with the California Nurses Association (CNA), an affiliate of the National Nurses United (NNU), went on a weeklong strike last Tuesday that ends today, in demand of a first contract settlement with their employers at the Kaiser Permanente Los Angeles Medical Center (LAMC). The CNA members say they want LAMC management agrees to a contract that fixes chronic understaffing that nurses argue is putting patients’ lives at risk.

The LAMC is the main hospital for Kaiser Permanente patients requiring specialized and critical care in southern California. Kaiser currently runs 800 medical facilities across the country (most of which are in California) and makes billions in yearly profits. But nurses have been critical of what they say is frequent understaffing. LAMC nurses who spoke with In These Times are adamant that management policies now in place make for dangerous working and healing conditions in the hospital. (Kaiser did not immediately respond to a request for comment.)

California was the first U.S state to implement minimum nurse-to-patient staffing ratios in 2004, but registered nurse Sandra Henke believes there are still holes caused by mismanagement. She says, “The problem is that Kaiser doesn’t give us resource nurses or break nurses so that when we go out on break that is mandated by law, the management says, ‘Here you cover that nurse that has 3 patients, and you take care of your own 3,’” therefore skewing the ratio.

“They expect, ‘Cover your friend over there so they can go to break,’ instead of having a dedicated break nurse, and what we want to have is these ratios put into the contract for safe staffing,” Henke added.

Research on nurse workload strongly suggests that lower ratios are associated with significantly lower patient mortality. Yazmin Gaxiola, a registered nurse striking at LAMC, tells In These Times that nurses are also expected to work in units outside their area of expertise, and are often under pressure to not take breaks or risk further complicating the ratios of other nurse.

“We tell administration that this is not safe. I sometimes feel that they are waiting for somebody to either die or something to happen before they can address the issues,” she says. In an attempt to protect themselves from losing their nursing licenses and create a record of patient advocacy, CNA says they have collected 800 incident sheets detailing unsafe assignments from LAMC nurses in the past eight months. At a picket line last Wednesday, nurses strung these sheets into a banner that stretched across a city block outside the facility.

The LAMC nurses also claim that they are the lowest paid Kaiser nurses in the state, receiving no cost-of-living or wage increases in the last six years. They voted to join CNA-NNU in June 2015, members say, in order to reverse this trend, seeking a contract similar to the one CNA had secured for 18,000 Kaiser nurses in Northern and Central California.

“I take care of the sickest patients, … and yet I get paid so much less. What we’re asking Kaiser for is parity—pay us the same [as nurses at other Kaiser facilities] and keep our benefits. I don’t think that makes me greedy,” Gaxiola says.

Kaiser has said in recent statements that its last contract proposal was “excellent”, but union members counter that the hundreds of nurses that had reviewed the proposal felt “disrespected,” according to Kaiser Division Director at CNA, Karen Chan. Last month, 1100 out of 1200 nurses at LAMC signed a strike authorization petition, leading to the longest strike at LAMC since 1990. “It was not enough to compensate them for the complex role they play in the delivery of healthcare,” Chan says.

While the compensation demands from frontline care workers at LAMC are hard to secure, Kaiser California seems far more willing to compensate executives at the highest levels, all while benefiting from government subsidies. The Institute for Health and Socio-Economic Policy published a report in 2012, “Benefiting from Charity Care: California Not-for-Profit Hospitals”, finding that 17 executives at the private, not-for-profit Kaiser made over $1 million a year in compensation for a total of $32.3 million. In addition to top-bracket executive pay, Kaiser is able to receive millions in tax exemptions every year ($789 million in 2010, according to analysis by IHSP) because of its non-profit status, greatly surpassing the amount set aside for charity care.

The union nurses at LAMC do have an ally in the matter: presidential candidate Senator Bernie Sanders of Vermont, who wrote a public letter to William Grice, the Executive Director of LAMC on Sunday night. “I am writing to urge you to bargain in good faith with the Kaiser Los Angeles Medical Center nurses for a fair contract that values their role in providing high quality health care,” said Sen. Sanders. In August 2015, NNU endorsed Sanders for president, citing his proposal for a Medicare-for-All system and history.